As soon as I found out I was pregnant, I knew I did not want to go through with it. I already had a child and did not want another. But deciding to get an abortion was only the first step.

I faced a lot of obstacles along the way. The first one was not being able to afford it. At the time, I was not in a good financial situation and I had to take time off work for the procedure. My partner was unemployed. I felt a strong sense of urgency in getting an abortion, because the longer you wait, the more expensive it gets. So time is another barrier.

There was also the obstacle of distance. The closest clinic was in Dallas, but I have family there so I didn’t want to do it there. I ended up going to a clinic in New Mexico, which was the next closest option. The trip was about four and a half hours by car. My partner went with me, and we were about 60 miles out when he said, “Stop the car, I’m not doing this with you.” So I had to turn around and drive all the way back to Texas, and then get back on the road and try to make up for lost time. At that point, I had broken down mentally. I’m only one person, and I thought I couldn’t do it alone. We ended up splitting up over that.

One misconception about people who get abortions is that we’re not responsible, or we don’t want the responsibility of having a child. They couldn’t be more wrong.

A lot of people tried to change my mind. My partner’s family called me a murderer and a baby killer. They tried to convince me not to go through with it, and I was like “No, I know I need to do this.” Other than my partner’s stepmother, who eventually accepted my decision, everyone else was pretty harsh, and made me feel like I was wrong in making that decision for myself.

I didn’t know a lot about abortion, and had to Google things like how to get an abortion, how to afford an abortion. That’s how I found out about organizations that help people pay for abortions. At first I wasn’t sure if I should trust them; I thought maybe they were a scam or a joke, maybe they would laugh at me if I called them up and told them I needed care. I was amazed to find out that there are organizations out there that can actually help you, like Fund Texas Choice, which is the organization that ended up helping me cover the cost. There are so many things I just never had to think about it until I needed an abortion.

One misconception about people who get abortions is that we’re not responsible, or we don’t want the responsibility of having a child. They couldn’t be more wrong. I was being responsible in getting my abortion because I knew I could not afford it and wanted to be a good parent for the child I already had. People might also say we’re not thinking about the future, that we don’t know what we want right now. But only you know what you truly want, and nobody else can tell you that.

I don’t regret my abortion at all. I knew I could not afford another child, and the relationship I was in was not working out. If it wasn’t for my abortion, I wouldn’t have known that the guy I was with was not the one for me, and I would not be in the financial situation I’m in today. I’m so proud of myself from just that one decision.

We make decisions every day, and abortion is just one of the decisions we should have the right to make. When you take that right away from people, you’re forcing them to be pregnant.

My message to people who are thinking about getting an abortion is that everything will be okay. Don’t let anyone make your decision for you, or change your mind once you’ve made it up, or call you names or tell you you’re doing the wrong thing. Only you know what you truly want, and we all should have the right to make that decision for ourselves.

Learn more about Angel’s story below: 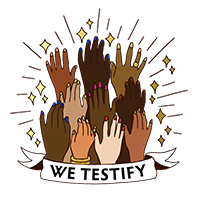