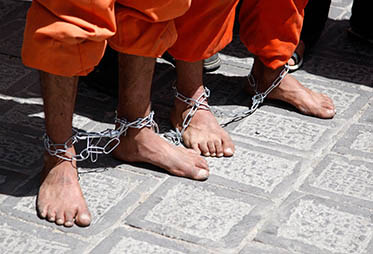 'America will never be destroyed from the outside. If we falter and lose our freedoms, it will be because we destroyed ourselves.'
- Abraham Lincoln

Among the ACLU's proudest moments are those in which it has come to the defense of civil liberties in times of national crisis.

That defense began in the early part of the 20th century, in response to the massive suppression of freedom of speech and of the press by President Woodrow Wilson during World War I. At the time, labor strikes in our nation's cities terrified millions of Americans who feared that law and order were collapsing. Growing anti-war sentiment also caused unrest, and Congress responded by passing the infamous Espionage Act of 1917, which was amended with the Sedition Act of 1918 to additionally criminalize any activity that threatened the administration in power. In 1918, riots broke out, paralyzing the country, and federal troops were called in to restore order in many cities. In June of that year, the country was shaken by politically motivated bombings, including an explosion at the home of Attorney General Mitchell Palmer.

What followed was one of the worst violations of civil liberties in American history. Law enforcement officials swooped down on suspected radicals in 33 cities, arresting 6,000 people, most of them immigrants. The raids involved the wholesale abuses of the law: arrests without a warrant, unreasonable searches and seizures, wanton destruction of property, police brutality, and prolonged detention.

In the midst of this crisis the National Civil Liberties Bureau, the predecessor of the ACLU, was formed and was the only national organization to speak out in defense of freedom of speech, freedom of the press, the rights of conscientious objectors, and the due process rights of radical labor leaders. The Bureau was led by Roger Baldwin, who went on to found the ACLU in January, 1920 along with Crystal Eastman, Arthur Garfield Hayes, and others.

Baldwin's cause was helped by the support of prominent lawyers such as future Supreme Court Justice Felix Frankfurter, who raised concerns that the abuses 'struck at the foundation of American free institutions, and brought the name of our country into disrepute.' Frankfurter's words resonated with Americans, and public opinion, which had initially been strongly in favor of the raids, soon changed.

ACLU History: Rooting Out 'Subversives:' Paranoia and Patriotism in the...

ACLU History: The Pentagon Papers: Censorship in the Name of National Security