ACLU History: Speaking up For Freedom of Expression 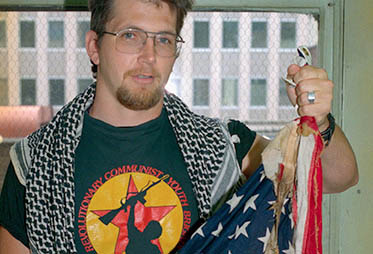 'If there is any principle of the Constitution that more imperatively calls for attachment than any other, it is the principle of free thought—not free thought for those who agree with us, but freedom for the thought that we hate.'
-- JUSTICE OLIVER WENDELL HOLMES

It is no accident that our Bill of Rights begins with the First Amendment, for all of our other liberties flow from our rights to free speech, free press, free exercise of religion, freedom of assembly, and the right to criticize our government. The ACLU was founded at a time when these rights were under sharp attack, and has played a central role in defending them ever since.

The ACLU was born in response to the massive suppression of freedom of speech and the press by the government during World War I. At the time, the concept of First Amendment rights as we enjoy them today did not exist either in the law or in the public mind. The Supreme Court had yet to uphold a single free speech claim, and in fact regularly justified the repression of speech, of the press and of the right to assemble. However, with passage of the Espionage Act of 1918, thousands of people were prosecuted for expressing their views, most of them simply for speaking out against the war. The public was newly awakened to the dangers of allowing the government to silence its critics.

One such protester, Socialist Party leader Eugene V. Debs, was sentenced to 10 years in prison under the Espionage Act just for telling a rally of peaceful workers to realize they were 'fit for something better than slavery and cannon fodder.' His case was one of three that reached the Supreme Court and began to turn the tide of legal and public opinion towards a more expansive view of free speech rights. Although the Justices upheld the prosecution of Debs and others, they clearly wrestled with the issues, and their decisions included several important dissents that are today considered the founding documents of modern free speech jurisprudence. In the words of journalist and First Amendment scholar Anthony Lewis, their dissent 'was so powerful, so convincing, that it changed the attitude of the country and the Court.'

ACLU History: The ACLU and the Bill of Rights

ACLU History: Freedom for the Thought We Hate

ACLU History: 'Robust, Uninhibited, and Wide Open:' The Meaning of the First...

ACLU History: The Pentagon Papers: Defending Freedom of the Press During...

ACLU History: The Age of Protest: A Banner Era for the First Amendment

ACLU History: Taking a Stand for Free Speech in Skokie

ACLU History: Taking a Stand for Free Speech in Skokie