Kendell Davis turned 18 on September 23, 2012. It’s the second birthday in a row he celebrated in custody. He was 16 when the police picked him up last year for having a gun. Because of New York’s laws, he was charged as an adult, with two felony counts of gun possession.  After the first trial, he spent more than a year at Rikers Island, while he waited for his second case to be resolved. He finally pled guilty, he told his mother, Lisa Ortega--in exchange for two to four years in prison—just to get off the island.  He’s been in prison at Washington Correctional Facility in Upstate New York since this spring. 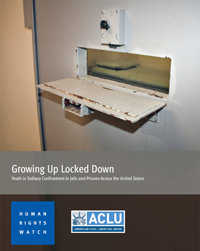 At Rikers, he spent a total of about six months in solitary confinement, or ‘the Bing,’ as it’s sometimes called. And he’s spent more time in solitary since he got to prison upstate. His mother says he was in the cell 24 hours a day, 7 days a week. He was allowed out twice a week to shower, but he wasn’t allowed to go to school, or to have reading materials. For a while, he didn’t even have a toothbrush.

His mother said he physically changed in solitary: his skin would get gray, his speech changed, he walked differently. And there were psychological effects, too: he has threatened suicide, and he’s told his mother that he hallucinates, thinking he’s levitating or the light fixture on the ceiling is melting.

“As a mother, it does make me feel powerless because we’re here to protect our children,” she said. “And this is really a big system, and it’s very difficult to break through. You know that your child is sitting in a room for some really minor things. And there’s nothing else you can do about it.”

Solitary confinement is known to induce—or exacerbate—mental illness. In Davis’ case, his mother says he was first diagnosed with anxiety and other problems when he was in third grade. More recently a court-appointed psychiatrist confirmed the diagnoses. Ortega says her son has a family history of mental illness, too: his father has borderline personality disorder and is bipolar.

“It’s heart-breaking because he’s a child and you know what? He doesn’t get these years back. They are gone. And they’re part of what’s going to be imbedded in his, his, being. He’s going to come out of there some sort of a person that’s lacking a lot more now only because he’s had nothing while he was in there.”