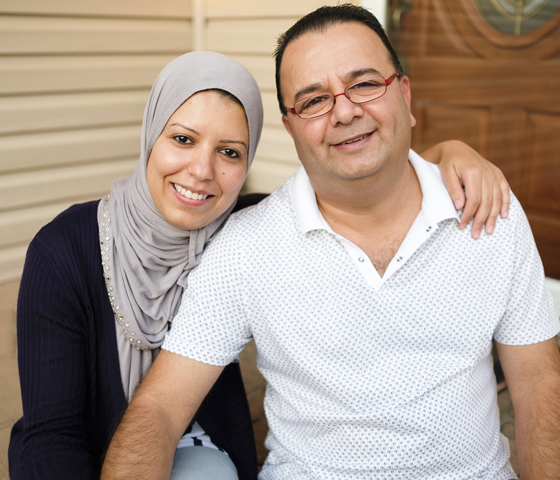 Ghassan and Nadia Alasaad are a married couple residing in Massachusetts, where Mr. Alasaad is a limousine driver and Ms. Alasaad is a nursing student. They are U.S. citizens. In July 2017, they traveled to Quebec on a family vacation with their daughters and other relatives. When they reentered the United States, their 11-year-old daughter was sick with a high fever.

At the border, they were directed to a secondary inspection, where Customs and Border Protection officers questioned Mr. Alasaad and searched through his unlocked phone, dismissing concerns about their daughter’s worsening fever and need for care. In response to Mr. Alasaad’s question as to why the family was being detained and searched, a CBP supervisor responded that he had simply felt like ordering a secondary inspection.

After five hours of detention, a CBP officer ordered Ms. Alasaad to provide the password to her locked phone. The Alasaads objected, in particular because Ms. Alasaad wears a headscarf in public in accordance with her religious beliefs, and she has photos in her phone of herself without a headscarf. The CBP officer told the Alasaads that if they didn’t disclose the password to Ms. Alasaad’s phone, it would be confiscated. The Alasaads reluctantly wrote down the password. Ms. Alasaad told the officer that a male officer could not search her phone because it had photos of herself without a headscarf. The officer told them that it would take two hours for a female officer to arrive, and then more time to search the phone. Based on what they were told, the Alasaads understood that they would need to wait several hours for their phones to be searched. Exhausted and desperate to attend to their daughter’s health, the Alasaads departed without their phones, about six hours after being initially detained.

The Alasaads received their phones approximately 15 days later. Soon after, Mr. Alasaad attempted to access videos of his daughter’s graduation. The phone displayed the message, “Sorry, this media file doesn’t exist on your internal storage.” This problem did not occur before CBP’s search and seizure of the phone.