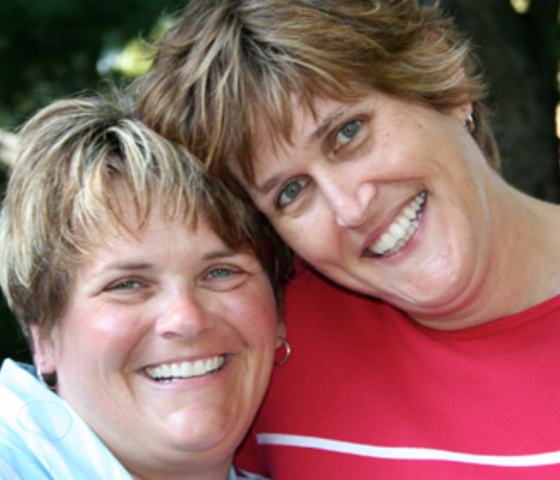 Madison. Judi, 53, and Katy, 51, met in college at the Girl Scout National Center in Wyoming. They were part of a group of women from the Midwest who would get together outside of summer camp.

"We were interested in each other, but fate would have it that one of us wouldn't be free to date," Judi says. "After four years we finally started dating long distance, and eventually we both wound up in Madison."

In July, they'll celebrate their 25th anniversary. Both work at The University of Wisconsin-Whitewater, where Judi is Director of Human Resources and Diversity, and Katy is Dean of the College of Education and Professional Studies. They love boating, kayaking, traveling, and riding their BMW motorcycles – which, Katy says, "are quite different from Harleys!"

After Judi and Katy had been together 15 years, Judi's family insisted they have a ceremony to recognize and celebrate their commitment like a wedding. They also became domestic partners in 2009. But a domestic partnership fails to grant the same rights, let alone societal status, as marriage.

In 2002, Katy had a seizure while the couple was traveling. Although Katy and Judi had drawn up health care power-of-attorney papers, they didn't have a copy of the document with them. As a result, hospital staff provided emergency care and deferred any further health care decisions to Katy's brother, who was her closest living relative. And although Katy had trouble concentrating and responding after the seizure, medical providers continued to question her, failing to address any questions to Judi.

"If we were legally married, we'd know we have the same protections as other couples," Judi says. "We would have property, visitation, and other rights. We wouldn't have to wonder what was covered if one of us is ill or dies."

"We want to know that if someone is in the hospital, we can see each other and have the right to make decisions for each other," Katy says. "Judi is the love of my life, and we've been together in sickness and in health. We want recognition of that."