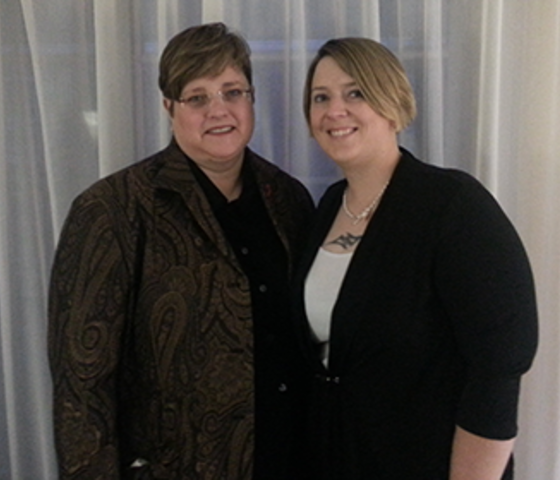 West Milwaukee. Kami, 36, and Karina, 44, have been together for 13 years. They met a few minutes after midnight at a New Year's Eve party on January 1, 2001, and went on their first date shortly later. They live in West Milwaukee with their dogs and cat. They registered as domestic partners in 2009, and were legally married in December 2013 with their closest friends in attendance in a historic courtroom in Winona, Minnesota. Karina, who didn't think she'd get very sentimental, surprised herself when she cried through the entire ceremony. "I just never thought this would ever happen in my lifetime. You get so used to being a second-class citizen that when you're not anymore, it's overwhelming."

Kami and Karina are just starting a family – Kami gave birth to their daughter in late March. Despite having two parents who love her and care for her, only Kami is recognized as her parent by the state. In fact, as far as the law is concerned, Karina and the baby are strangers. In contrast, if Kami and Karina's marriage were recognized, Karina would automatically be recognized as the baby's parent.

Not just that, but Wisconsin law doesn't allow Karina to secure her parental rights through a stepparent adoption, nor will Wisconsin allow Karina to take advantage of the second-parent adoption process available in many other states. Kami and Karina are deprived of access to the same legal protections of their parental relationship with their child that are available to married couples, for no other reason than that they are both women.