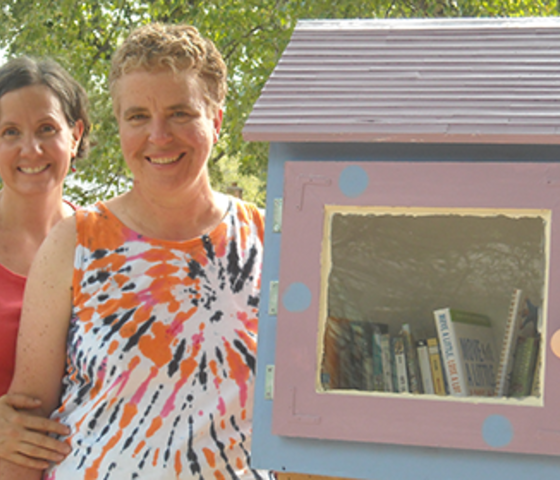 Madison. Salud, 50, and Pam, 49, were both working for the American Association of Retired Persons -- Pam in Seattle, and Salud in California -- when they met. A coworker who was friends with both of them used to forward funny emails from Salud to Pam. Eventually, Salud came to a meeting in the Washington office and they were finally introduced. "OH! You're Salud from the emails!" Pam exclaimed excitedly. Pam recalls: "The moment I met her, I was totally smitten, just whacked out in love." They have now been together for 18 years.

When their daughter was born in 2001, she was 14 weeks premature and weighed just over two pounds. Just after the birth, Pam also experienced complications, and Salud asked for a family I.D. bracelet that would allow her to enter the neo-natal intensive care unit to care for their child. She was refused because those bracelets were "only for family," until Pam's brother-in-law later persuaded a nurse to relent and give Salud a bracelet. Salud later adopted their daughter in Washington State where second-parent adoption is available. But in the hospital in the early days of her child's life, Salud realized that if Pam had died during childbirth, she could have lost both her partner and her daughter, because the law did not protect her relationships with them.

Now 12, Salud and Pam's daughter has an active social life. Despite some physical disabilities resulting from a hospital-acquired infection when she was still in the NICU, she is very active in sports, and loves a physical challenge. As for the law that keeps her parents from getting married, Pam says their daughter "just doesn't understand why anyone would object to our marriage."

Salud and Pam have lived in Madison since 2002, and they registered as domestic partners in Wisconsin in 2010.