Since 1967, when five days of violent clashes between police and community members left 26 dead and hundreds injured, residents of my great city of Newark have protested police abuse and impunity. A reminder of one of their most desired reforms sits on my desk: a sepia-toned photo of civil rights marchers with signs demanding the creation of a civilian review board to provide citizen oversight of the police.

Nearly 50 years of fortitude later, those demands were finally fulfilled last week when Newark Mayor Ras Baraka, flanked by activists and the police director in the grand rotunda at city hall, signed an executive order creating a strong and independent civilian complaint review board to review allegations of police misconduct.

This new initiative constitutes an enormous victory for Newark, but its importance doesn't end at the borders of New Jersey's largest city. As one of the strongest police oversight boards in the country, Newark's civilian review board has national implications, especially at a time when police shootings of unarmed Black men in Baltimore and Ferguson have started a nationwide conversation about accountability.

A three-year U.S. Department of Justice civil rights investigation last summer showed years and years of widespread civil and human rights abuses. Among the most shocking statistics: The DOJ found that out of the hundreds of excessive force complaints filed against Newark police officers from 2007 to 2012, the department's internal affairs division sustained just one. A consent decree will soon be entered and a federal monitor appointed to oversee reforms to the department.

Yet Newark is far from unique. Department of Justice investigations of major American cities' police departments like Cleveland, New Orleans, and Seattle have found the same kinds of egregious lapses. Newark's new review board can serve as a model of first steps other cities can take to rein in their police departments that too often see the people they watch over as the enemy.

The review board, which is among the strongest in the nation, is meant to outlast the DOJ's consent decree and provide civilian oversight for years to come. Not only will it have the power to subpoena records and police officer testimony, it will have the rare power to make its disciplinary decisions stick. In order to reject the review board's findings, the police director must determine that the board committed "clear error," a high standard to meet. The board will also audit department policies and procedures, and it will issue public reports of data on interactions with the public. 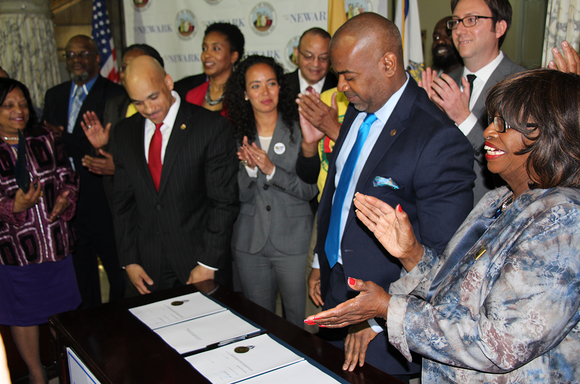 My hometown, like too many American cities, has more than its share of problems and systemic injustices, and no problem eclipses the fraught interactions Newarkers have with their police department. For many members of my community, there is no such thing as a positive encounter with the police, a problem that reverberates in communities across the country.

I grew up hearing the same kinds of stories of discrimination and impunity that pushed people into the streets of Baltimore and Ferguson; the same stories told by friends of Walter Scott in South Carolina and the parents of Tamir Rice in Cleveland. Friends were thrown by police against walls for walking in the "wrong" neighborhood. Mothers and fathers were harassed by police about their children. I saw the anger and despair of residents on the losing end of police violence and abuse.

Now, for the first time in a very long time, Newarkers will have a way to be heard and a promise of due diligence. Because of this, there's new hope that the police and the communities they protect and serve will come together to make the streets safer for everyone because we're no longer asking, "Who will guard the guardians?" Now we have the answer we struggled so long for: the people of Newark will.

It's a model other cities and towns should follow as the events of Ferguson and Baltimore demonstrate how critical police reform is in communities across America today.

Daunte Wright Should Never Have Been Stopped

Ending Qualified Immunity Once and For All is the Next Step in Holding Police...