Police gunning down unarmed black men and boys is an American horror film that keeps getting replayed. Except that it isn’t a movie you can turn off: It’s a painful, outrageous, and unacceptable reality.

The latest iteration is the execution of Walter Scott – pulled over for a traffic violation, and who allegedly owed child support – by a South Carolina police officer. As Scott ran away from the officer, four bullets slammed into his back and one hit his ear. After the shooting, he walked calmly over to Mr. Scott’s body, lying in the grass – and then, for good measure, handcuffed him.

Why was Walter Scott killed? Why does this keep happening?

Did we not just see a South Carolina police officer shoot Levar Jones for trying to retrieve his driver’s license at the officer’s request at a gas station? Did we not just watch Eric Garner, an unarmed man, choked to death in Staten Island while being arrested for selling cigarettes on the street? Are we not still grappling with 12-year-old Tamir Rice being shot and killed in a Cleveland park while playing with a toy gun within seconds of police arriving? Did we not just recoil from images of Michael Brown’s lifeless body left unattended in the street for hours?

Have we not recently heard the testimony of Milton Hall’s mother recalling how her son’s life ended in a barrage of 45 bullets in Saginaw, Michigan? What about the killing of Dontre Hamilton in Milwaukee, shot 14 times after an altercation with the police because he was sleeping in a park? Or John Crawford in a Walmart near Dayton, Ohio, gunned down for picking up a BB gun in the sporting goods section?

The list is long, and yet there are hundreds more that haven’t gone viral online or been caught on video.

The tsunami of incidents of police brutality against communities of color has further frayed America’s trust and confidence in police departments to achieve their singular function in our society: to serve and to protect our families and communities. The slaying of Walter Scott shows that all too often the police perform the opposite function, by terrorizing and profiling people of color.

Steps to halt this parade of horrors have been taken, but we’re not there yet. We have a long way to go. Recommendations put forth by the President’s Task Force for 21st Century Policing, DOJ’s announcement of resources for pilot sites in six cities aimed at strengthening the bonds between police and citizens, reports of and recommendations to end jaw-dropping racial profiling and selective enforcement of low-level offenses in communities of color – all of these are important efforts. Yet the number of tragic and avoidable killings of people of color continues to mount.

Our country’s addiction to arrests and incarceration has created fear in poorer communities of being arrested for minor, nonviolent offenses, prompting interactions with police that we have seen time and again escalate quickly into unnecessary tragedies. A moment of conjecture: If Walter Scott does not fear that a routine traffic stop or owing money is going to lead to his arrest and possible imprisonment, does he flee from the officer? Is he alive today?

Police need robust training for police officers on de-escalation techniques, relegating force to a last resort. Force should be understood on a continuum that allows for only the minimum force necessary in any given situation. Police need to ban racial profiling, provide implicit bias trainings, and train officers on how to practice procedural justice. When officers or departments violate policy or break the law, those departments and state officials must hold the responsible parties accountable.

We welcome the swift action in this case by North Charleston – undoubtedly propelled here only by the existence of a damning video – in bringing charges against the police officer. Video or no video, prompt investigation and appropriate action following a police shooting – just as with any possible crime –should be the rule nationwide, not the exception.

But these incidents are more than just bad-apple cops: The problem of unjustified lethal force is endemic.

Sadly, we only know part of the story because we have no uniform, comprehensive reporting requirements of police shootings. The data just doesn’t exist. Indeed, even after the many discussions of police force generated by these incidents in recent months, and notwithstanding the DOJ’s documentation of widespread problems around use of force in Cleveland and the use of unreasonable force and racial profiling in Ferguson, we have not been able to reconcile the mandate of fair, constitutional, and humane law enforcement with the current status of American policing.

The unjustified killings of unarmed people of color by police, often arising from racial profiling or enforcement of minor offenses, continue with reckless and tragic abandon. The steps taken by DOJ are very important, but much, much more needs to be done.

Walter Scott should be alive, and at home. Instead, he’s dead. His death is not an aberration. It is a direct result of the current state of policing in many parts of America today.

Don't make these incidents into a race issue. The real issue is that, in the last twenty years, American police departments have gone away from being helpful community servants to a fully militarized policing force (here is a good reason to keep and bear arms to bear against a tyrannical government.) With this transformation, comes the "it's us (police) against everyone else. This is actually being taught in police academies all over the US. When you try to turn this into a race thing, you are causing the non black citizens to tune their ears out. To validate this, see how cops act when you know what your rights are better than they do and they go into chimp out mode.

well said. It's not about race, though minorities suffer the power abuse more. the real problem is there is no accuountability for police misconduct and it is so difficult to sue police and even more difficult to win

its getting harder to trust the so called law what are we doing wrong to make them shot people in the back , or any were , get your act together , people of the law

Remove 'Homeland Security' from any involvement in training or equipping our police.

Being armed or not armed doesn't tell you enough. Police are authorized to shoot unarmed individuals in many situations.

Police misconduct is not an aberration. The shooting of suspects in the back as they're are fleeing is an aberration. If the ACLU says otherwise, they need to actually back this statement up. Otherwise, it's depicting a reality which just doesn't exist, and worse, it's distracting us from problems in the reality which does exist.

And police need to be held personally accountable for their actions...

In the twelve years as an 083 Federal Police Officer, I only drew my weapon twice and never fired. I was then subjected to relentless harassment because I was in the California National Guard. Case documented by FBI that Jerry P. Calaway said I was drinking beer while at the riots, 8 Form eights costing your tax payer dollars 60,000 a pop, including uniform allowance that was using to BUY GUNS like a good Republican.DDJC.BC.gov has it on record including orders to run with the lights out with patrol cars while I was going home. I am glad that I retired ARMY and Civil Service and not hear from these Republican Supervisors who paid for their appointments to work for Defense logistics Agency. Now you know what it like to work under Ted Cruz-Bohner-and the rest in Congress. It is a wonder that there has been no incidents with the Capitol Police whose salaries are being cut to $45,000 a year by Bohner in the worlds most expensive city Washington District of Columbia.

Could this have anything to do with the change in policies enacted after 9/11. The president was given sweeping powers. Is there one related to police departments that we aren't being told about?

As long as there is no accountability and the police continue to investigate themselves through so called internal investigations,this practice will continue. 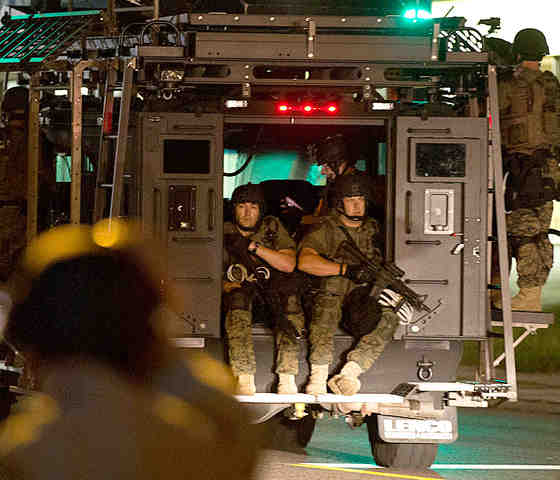 Here’s How Communities and City Councils Can Reject Trump’s Militarization of...

Trump Just Gave Thousands of Bayonets And Hundreds of Grenade Launchers Back...