Racial profiling in Milwaukee is as common to Black men as manhood itself.

I’m a lifelong Milwaukeean and a Black man. Born at the old Mount Sinai, raised in the Rufus King and Sherman Park neighborhoods, I’m a unicorn — a Black man between 14 and 40 years old who does not have a felony, misdemeanor, or record of any kind. I’m the exception to a rule that should have long ceased to exist.

Since 2012, over half of Milwaukee’s Black men in their 30s are, or have been, locked up. I won’t go into the horrible details of socioeconomic and political disenfranchisement, but let’s just say we started from the bottom, and, for a lot of people, we’re still there.

Being Black in Milwaukee means having the constant specter of police haunting your life.

One night I was carrying takeout pizza to my mom’s house. They came at me, guns drawn. Mistaken identity they said. Another time I was standing at a bus stop in a white neighborhood on my way to work. There were two white people, also waiting for the bus. The police chose to stop me.

After that, I felt violated and angry. I filed complaints with the mayor, an alderman, and a U.S. senator. Eventually an internal affairs officer called me to follow up. After a brief conversation, she simply asked, “Well, wouldn't YOU stop a Black man standing at a bus stop at 6 a.m.?”

If it isn’t obvious, my answer was “No!”

Black and Latino people are magnets for police harassment in this city. Police abuse of people of color here isn’t imagination. It’s reality. This has been true for a long time. From 1967 to 2017, not much has changed.

It wasn’t until I began working for the ACLU, talking to Black and Latino residents about Milwaukee police, that I realized there were thousands of stories like mine — stories from the mundane to the maddening to the horrible.

What follows is just a very small portion of what I’ve heard:

“I saw the cops following in an unmarked (the ‘jump out boys’). They stopped in front of my house and both of them got out of the car. The driver had his hand on his gun but he didn’t take it out. The cop asked, ‘How old are you?’ I said, ‘15.’ ‘You look suspicious. What’s in the bag?’”

“They stopped me saying ‘you fit the description of a robbery’. They frisked me (without asking), put me in a squad, ran my name, and let me go.”

A 20-year-old walking home from the park:

“We were walking to a friend’s house. The cops drove up and stopped. A bike cop came at us yelling, ‘Lay on the ground before I shoot you! …If it’s more than two of you, we have the right to stop you.’ They took out all of my stuff and asked me for ID afterwards. I just finished playing ball, so I didn’t have it on me. After an hour they uncuffed me, let me out of the squad, gave me a $200-plus ticket for not having ID, then they let me go.”

Over the last two years, I’ve personally interviewed hundreds of people about their interactions with police. Overwhelmingly they tell me the same story of police harassment and intimidation. The evidence I’ve gathered is the basis of the lawsuit the ACLU recently filed against the Milwaukee police for its racially biased stop-and-frisk program

What stands out when talking to people is how many Black and Latino folks aren’t just having one or two stops every few years, as I've had. Some are getting profiled and detained almost weekly. Imagine being stopped multiple times a week by police for no good reason and how it would affect your life and how you go about the world. You’d begin to feel that some suspect your very existence.

These feelings don’t disappear because a police spokesperson comes forward and says racial profiling doesn’t exist in Milwaukee. Black and Latino People here see that statement for what it is.

Whatever the Milwaukee Police call it, they’re engaging in a prejudicial, targeted, and invasive stop-and-frisk policy, focused on Black and Latino communities. These hundreds of thousands of incidents aren’t just an inconvenience. They have created life-long trauma, job loss, destruction of dignity, and sometimes incite the destruction of life itself. If you doubt that, Google Officers Vagnini, Manney, and Heaggan-Brown.

Milwaukee, it seems, has déjà vu from another era. Does the Constitution apply to Black and Latino people? Yes it does, and we’re going to make sure this city finds that out in court.

We either respect everyone’s rights and humanity, with equity under the law, or allow our city to remain a low-level apartheid state, with the inevitable consequences and upheaval to follow.

Want to know who commits most of the crime in Milwaukee causing the them to have to be policed and treated like barbarians? People of color.

Most violent crime is perpetrated by men, not those of color. Most terrorism in the United States history has been perpetrated by white males! The ACLU should check out the non-fiction movie "Deacons for Defense".

How brave of you to make such a stupid generalization without giving your name. Kudos to you!

Now, if we could only have all white men deported because "they" represent the greatest number of terrorists in this country.

Story:
Officer "unknown" was responding to shots fired at a party when a car containing 4 black youths was ambushed by the unknown officer. Balch Springs Texas refuses to release dash cam or body footage. Demand justice at the following Balch Springs department email.

Last year: I was breaking no laws. Denver cop comes over grabs my left arm. (Weeks later we'd find out my arm is dislocated) I flinched, the cop said, "Dont move...relax", as he rifled my pockets and man-purse. I asked why are you doing this? He said, "The computer says you're known to carry a weapon." I've never in my life heard those words much less "carried a weapon". I felt violated and abused. It went no further than Internal Affairs and nothing happened.

My son is a business owner in Milwaukee. He works everyday. He does not commit crimes; however, he drives a nice-looking car and late model truck. The windows are tinted.

He has been stopped numerous times; told that the tint in one of his vehicles was not legal and other times, the officers made excuses as to why they stopped him. He was not arrested, taken to jail, or ticketed either time.

My son knows not to move when pulled over and to do nothing unless told.

Many other black males are stopped for no good reason and since they don't think that anything will be done about it, they don't report it.

Along with prayer, this had kept my son alive.

We want the police to do their job; however, they can't stop every black male because he does not fit into their category as ok.

This clown below me clearly has no knowledge of "the horrible details of socioeconomic and political disenfranchisement" in Milwaukee as stated in the article. However, you do troll ALCU pages looking to insert your ignorant, unfounded opinion. Milwaukee Police have been routinely convicted of illegal practices and constantly violate the rights of minority communities. There is absolutely ZERO funding towards rebuilding the city of Milwaukee -- boarded up buildings, broken down roads, poorly funded schools, shit grocery stores, shit transit system -- all while being racially profiled and targeted by the police. Crime follows poverty, always.

I was under the impression that you can't be ticketed for walking without carrying id. How could that $200 fine for not carrying id hold up in court? 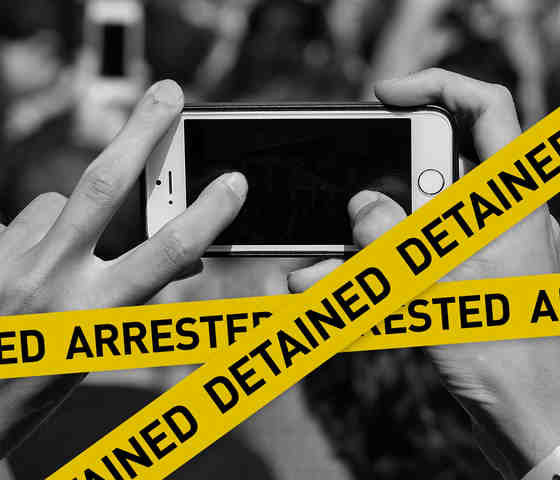