Washington State May Make It Easier to Sterilize People With Disabilities

Even in the age of the eugenics movement, where tens of thousands were involuntarily sterilized by state governments who sought to breed “better” human beings by removing disability from the gene pool, the Hewitt case attracted nationwide attention. Could a diagnosis of disability allow parents to control their child’s reproductive future against his or her will?

Ann believed it could not, summarizing her fate matter-of-factly. “I had no dolls when I was little, and I'll have no children when I'm old,” she said. “That’s all there is to it.”

We’ve come a long way since the age of the eugenics movement, particularly when it comes to matters of reproductive choice and bodily autonomy. And yet, state laws still allow people with disabilities to be sterilized without their consent. Today the state of Washington is considering a proposal that the ACLU believes could expand the use of sterilization for individuals under guardianship.  Guardianship is a surprisingly common legal arrangement where a third-party is authorized to make virtually all decisions for a person with a disability.

Currently, state law fortunately prohibits guardians from authorizing sterilization without court approval — but the state judicial system is currently considering a proposal to create a form to more clearly articulate how guardians can request permission for this procedure. While the proposal is designed to clarify existing law, advocates with disabilities and the ACLU believe that creating this form will streamline the process and increase the number of guardians requesting the sterilization of those under their power.

Whether it comes from parents, the court system, or anyone else, sterilization should never be imposed on a person without their consent.

For those who do choose it for themselves, sterilization can be an appropriate medical procedure. But the presence of guardianship seriously complicates the issue. Guardianship entails loss of legal adulthood, meaning that an individual lacks capacity in the eyes of the law to make their own decisions or express their own will and preference on how they should be treated. Measures to make it easier for guardians to permanently sterilize people with disabilities should be viewed as suspect. The Hewitt case is only one example in a long line of disagreements over who gets to make choices about medical procedures applied to people with intellectual disabilities.

Such decisions are often treated as family choices rather than questions of individual autonomy, which should require an expression of preference on the part of the person receiving the procedure. Some guardians cite fears of sexual assault in choosing to sterilize people with disabilities — yet sterilization in no way prevents the sexual assault of people with developmental disabilities, an all too common occurrence. Instead, it can merely hide evidence of it. As such, there are credible concerns that guardians may seek sterilization as a means of lessening the complications emerging from abuse, rather than taking the measures necessary to stop it.

The state of Washington should decline to streamline the process for guardian-imposed sterilization. The state can ensure that individuals who require decision-making support have a clear process by which they — rather than their guardian — can request such a procedure (if it is truly their choice to do so). Guardianship, with its total loss of decision-making authority by the individual, is not the appropriate mechanism for this. Instead, the state should consider joining Texas, Delaware, and jurisdictions around the world in implementing supported decision-making, a new legal arrangement that allows people with disabilities to choose trusted advisors to help them with their choices without surrendering final decision-making authority.

Control over one’s own body is one of the most fundamental civil liberties. Everyone deserves the right to have the final say about what happens to their own body. People with disabilities are no different.

As an autistic person, married to an autistic person with two beautiful autistic children, this discussion does not belong to anyone who isn't struggling with a developmental or intellectual delay. Do I struggle, yes, but what parent doesn't struggle? My autism is not my biggest, it was the lack of good healthcare after my children were born and the development of post partum psychosis. The lack of understanding of women, hormones, and neurodivergent brains caused a lot more harm. You should never take the rights of a person away just because it inconveniences your life. You shouldn't have become guardian if you weren't willing to handle all aspects of life, that includes sex, babies, menstruation, and hormonal health. I will never support altering a persons body and life without their consent. Very few people also understand what menopause or andropause effects on our brains are.

If you are a parent and are trying to control your child's body and expose them to potential complications of surgery when they can't agree or understand and it's UNNECESSARY, you are an abuser. If you are a parent and you are thinking of sterilizing your child 'in case they get abused,' YOU ARE A LAZY AND NEGLECTFUL PARENT. If your child has a higher than average likelihood of being targeted by sexual predators and they cannot protect themselves from these predators it's your responsibility to KEEP THEM SAFE, not make sure that the predators don't have to pay child support!! YOUR PRIORITY SHOULD BE YOUR CHILD'S WELLBEING, not the wellbeing of a potential spawn of theirs. If your daughter is transgender or bisexual or Native American/First Nations but non disabled, she's 80% more likely than a cis heterosexual white woman to be raped or murdered, just like she would be if she was a cis heterosexual white autistic woman. Is that her fault? Should we be sterilizing our bisexual daughters just because they're probably going to get raped??? OR should we be taking extra care of them and making sure we educate them about their bodies and safety, and trying to make the world a safer place for them? If your answer to protecting your child is preventing them from making choices about their own body, YOU are the person who should have been sterilized, because you are an unfit, abusive, controlling parent. People with Downs or Autism have been parents CONSENSUALLY, of their own volition, with loving partners, and have raised healthy, happy children. You know who tends to raise kids badly or grow up to be damaged adults? Children raised by abusive, neglectful, and controlling parents. If you're trying to sterilize your child without their complete understanding and consent, you are the problem, and without your shitty example in their life, they would likely be an amazing parent.

The letter from the Pattern Forms Committee chair and the proposed form(links in the article) make it clear that the intent is to ensure that the law is followed, not to make it any easier at all for a guardian to have a ward sterilized. The concern these address is lack of knowledge of what the law requires and sterilizations that have been done illegally. One factor is that physicians approached to do the procedure by a guardian must be educated to know that guardians do not have legal authority to have their ward sterilized. Another factor is ensuring that the rights a of a ward aren't violated. The proposed pattern form order makes it clear that the court must appoint both an attorney and guardian ad litem to advocate for the ward's desires and best interests. I don't understand the problem with this.

So here is the low down my sister is mentally disabled has the thought process of a 12 year old. Who is homeless and wants no help from our family unless necessary. She is flaky on meeting up and has also been pregnant I know her child's adoptive parents well. She also uses drugs is debatably pregnant again. So how can I as her sister get her her help or sterilized in order to stop her from doing this anymore.

The same people who gave us eugenics and forced sterilization gave us abortions. Abortions were part of a eugenics plan.
Think about that.

Unless your the parent taking care of all the children your daughter keeps having, i know too many woman raising their grandchildren

"We’ve come a long way since the age of the eugenics movement..."

Let's call involuntary commitment what it really is and alway was. It's an Alimony Prevention Program. Back in the old days husbands used to commit their wives so they couldn't get a divorce.
Guardianship is a wealth redistribution program. If you have a well to do relative and you know the right probate court crooks and/or pay off relatives to lie in court you can throw them in a mental institution and help yourself to their money and assets. I personally have been witness to the later back in 1982.

What about all the children who have had miserable lives due to living with a mentally ill parent? We have to think of what is in the best interest of the child.

Depends on the illness 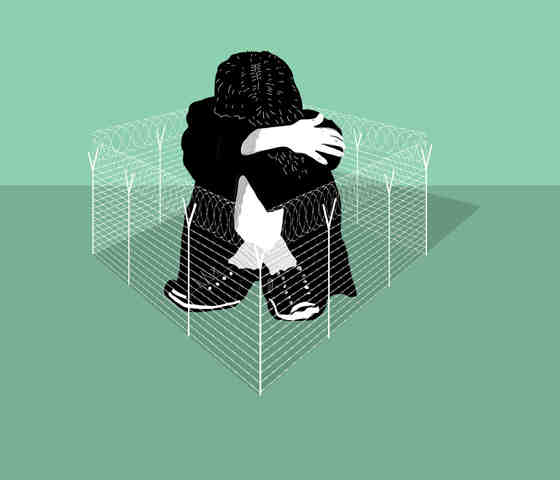 Disability Is No Excuse to Deprive One of Civil Liberties

The EMPOWER Care Act Would Give People With Disabilities the Freedom They...