Why Is Chelsea Manning Prohibited From Having Caitlyn Jenner’s Vanity Fair Issue & The Senate Torture Report?

For Chelsea Manning the last five years have been a fight to survive. She has faced the death penalty and endured the brutal torture of solitary confinement in Kuwait and again while awaiting trial at Quantico in Virginia. She has come out as a trans woman and fought for her voice and her health care. She still fights for both as she also continues her long legal fight for freedom.

Through it all she has continued to send messages of hope to others. Her voice has become central to our movements for government transparency and transgender justice.

But she is now facing another fight that threatens to silence her. 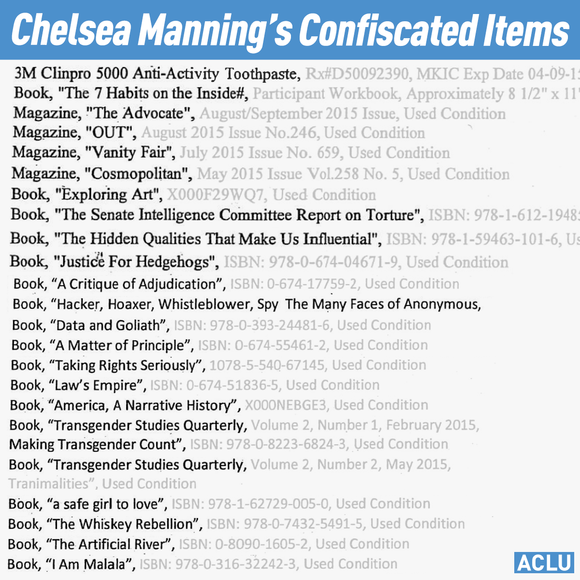 At the time, Chelsea was not informed why these items were taken. Her cell was searched, and they were removed when she was placed in solitary confinement for 24 hours following an investigation into allegations that she was “disrespectful” to an officer.

For almost a month, Chelsea, an ACLU client, awaited clarity about the charges and requested that her reading materials be returned to her. But the military denied those requests.

Now Chelsea will go before a disciplinary board on Tuesday, during which she will face charges for disrespecting an officer, misusing medication, and possessing prohibited items.

But the more details that emerge about these charges, the more concerning this all becomes. The alleged encounter that prompted the “disrespect” charge involved Chelsea requesting a lawyer when she realized that she was being accused of wrongdoing. As for “misusing medication,” that charged is based solely on possessing toothpaste that expired in April of this year. And the “prohibited” property she had in her possession included, among other things, issues of Vanity Fair, OUT magazine, the Advocate, and the Cosmopolitan issue that included her own interview.

If all that wasn’t bad enough, the possible punishment for these alleged infractions includes indefinite solitary confinement.

Since supporters learned of these charges and started a campaign to have them dropped, the military has responded with assurances that Chelsea’s treatment will be “fair and equitable.” But subsequent to that statement Chelsea was inexplicably denied all access to the law library as she prepares to go before the disciplinary board. Because she is not entitled to have counsel present at her board, this access is especially important.

Hopefully with public pressure and increasing scrutiny, the charges against Chelsea will be dismissed, and she will not be subjected to the torture of solitary or any other punishment that further restricts her access to public engagement and the support systems that she has cultivated from prison.

But regardless of the ultimate outcome, the fact that she has had to face this discipline at all is a concerning reflection of how our incarceration systems attempt to isolate and dehumanize those held behind prison walls.

Even though experts agree that solitary confinement is a form of torture, we continue to hear reports of people being sent to solitary for alleged infractions as absurd as having an expired tube of toothpaste or praying in a group of three, having “too many” stamps, or cheering too loudly during the Super Bowl. For transgender prisoners like Chelsea, solitary often becomes a default placement for “safety” reasons in an inherently unsafe system.

Incarceration is itself a form of isolation — a mechanism for cutting people off from their families and support systems and taking them out of the community. Within that isolation, the added disruption and harms that flow from solitary and other disciplinary mechanisms cannot be overstated. For Chelsea, her books, magazines, and reports are a part of her and they help build her voice. And this voice is her connection to a network of people who uplift her and are uplifted and inspired by her.

If Chelsea loses her reading materials permanently, or if she is sent to solitary, or if she is otherwise disciplined because she asked for a lawyer or had old toothpaste or wanted to read about Caitlyn Jenner or the Senate Torture Report, then we all lose. We lose a piece of her voice in our public discourse, and we lose another fight against a disruptive and dehumanizing system of so-called justice.