By Chris Brook, Legal Director, ACLU of North Carolina
Tags
Victoria Hernandez Jose is a member of North Carolina’s sole farmworkers’ union, which has been targeted by a state law limiting its ability to represent and advocate for farm laborers.

Farmworkers play a vital role in North Carolina’s multibillion dollar agriculture industry, providing essential labor in a state that produces much of the nation’s sweet potatoes, tobacco, Christmas trees, and many other crops.

More than 90 percent of these workers are Latino. Many are migrants working seasonally under temporary visas, and they are among the lowest paid and most vulnerable workers in the state. They face high risks to their health and safety, substandard living conditions, and abuse and exploitation by their employers.

This month, they won an important victory in federal court that vindicated their right to fight for safe working conditions and fair pay.

For years, North Carolina’s only farmworkers union — the Farm Labor Organizing Committee (FLOC) — has worked tirelessly to advocate for the rights of these workers. The union has successfully negotiated on their behalf with major employers, such as the R.J. Reynolds Tobacco Company.

But in 2017, North Carolina passed a new law that made it all but impossible for FLOC to operate, gutting the union’s ability to collect dues from members and make collective bargaining agreements on their behalf. Not coincidentally, the North Carolina Farm Act of 2017 was sponsored and supported by legislators who have a vested financial interest in suppressing farmworker organizing.

The law’s primary sponsor, state Sen. Brent Jackson (R), owns a farming company and was sued for wage theft by Latino farmworkers who were helped by FLOC. Another farm owner, state Rep. Jimmy Dixon (R), was the only legislator to speak in favor of the bill’s anti-worker provisions on the House floor and said the law was necessary because “there are some predatory folks that make a good living coming around and getting people to be dissatisfied, and a few of us farmers are getting a little bit tired of it.”

Along with the Southern Poverty Law Center and North Carolina Justice Center, the ACLU filed a lawsuit earlier this year on behalf of FLOC and two of its members challenging the North Carolina Farm Act. The lawsuit argues that the measure intentionally discriminates against farmworkers in violation of their civil and constitutional rights by creating new restrictions that target their unions — and no one else’s.

Last week, in response to our lawsuit, a federal court ruled against the law, finding that the Farm Act likely violated the equal protection rights of the union and its members guaranteed by the 14th Amendment. The court blocked the law from being enforced as our challenge proceeds.

The law prevents farmworkers from having their union dues deducted from paychecks, which many FLOC member rely on to make their union contribution because they lack access to banking services. An estimated 50 to 60 percent of FLOC’s budget comes from these dues.

It also prevents FLOC or its members from negotiating future settlements with farms that include any agreements with the union.

This important ruling reinforces the simple tenet that workers have a constitutional right to join and form unions and that politicians cannot single out and attack certain groups simply because they disagree with them. 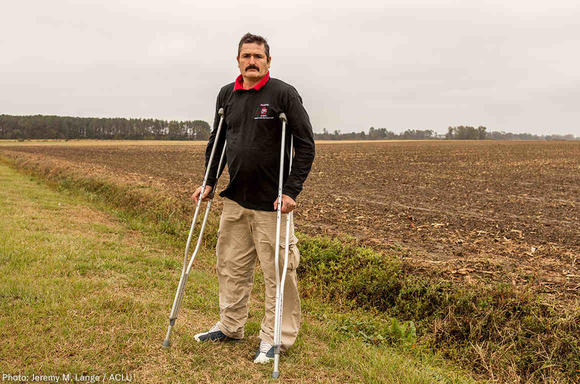 Arturo Hernandez, a farmworker from Mexico and a FLOC member. Hernandez, who works in Samson County, N.C., was recently injured on the job. (Photo: Jeremy M. Lange)

This initial victory means that FLOC can return to the work of organizing and protecting its hardworking members, many of whom have had their lives turned upside down and livelihoods endangered by Hurricane Florence, which ripped through the heart of Eastern North Carolina’s farming country.

As they and the rest of North Carolina work to recover from the devastation, we would all do well to keep in mind the people — many of them immigrants — who contribute important labor and skills to North Carolina’s agricultural economy. Most of FLOC’s dues-paying members come to North Carolina as guest workers under the H-2A visa program. They endure physically demanding work while living in isolated, employer-owned labor camps in rural parts of the state, without access to transportation.

Farmworkers endure tremendous hardships to contribute to North Carolina’s economy. They deserve protections when they’re on the job, and they have a constitutional right to organize and advocate for better working conditions. Despite what corporate farming interests and certain lawmakers may hope, these workers — and their labor rights — are protected by the Constitution.