A reporter in West Virginia was arrested Tuesday night for literally doing his job.

Dan Heyman, a veteran reporter with Public News Service, was covering a visit to the state capitol by Health and Human Services Secretary Tom Price and senior Trump advisor Kellyanne Conway. As they walked through the building, Heyman pressed the two on whether domestic violence would be considered a preexisting condition under the American Health Care Act passed by the House last week.

Suddenly, he was pulled aside by Capitol police, handcuffed, and hauled off to jail. He was charged with a misdemeanor for “willful disruption of governmental processes” and only released when his employer posted a $5,000 bond. He is still awaiting a preliminary hearing.

“At some point I think they decided I was just too persistent in asking this question and trying to do my job, and they arrested me,” Heyman said after he was released. 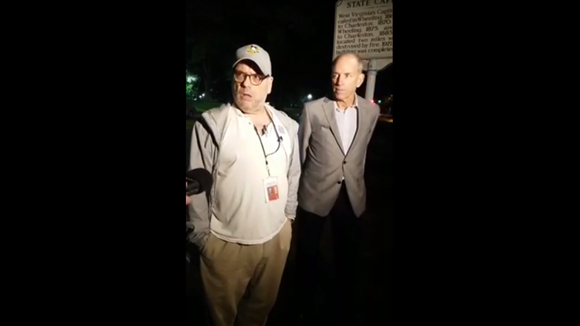 A criminal complaint alleges that Heyman was “causing a disturbance by yelling questions.” What it doesn’t note was that Heyman was actually targeted for reporting on matters critical to the public interest — not in a closed meeting or the inside of a working office, but in the hallways of a government building.

The law under which Heyman was charged can carry a fine of up to $100 and a jail sentence of up to six months.

At a time of eroding trust in our government institutions, an independent free press is more critical than ever to ensure that the people running our country are held to account. This makes Heyman’s arrest all the more distressing.

What happened in West Virginia didn’t happen in a vacuum. The president has been attempting to undermine the press on a regular basis and resists transparency at every turn. He has smeared the media as “the enemy of the people.” On the campaign trail, he revoked the credentials of some of the most prestigious news outlets in the country because he didn’t like their coverage. Reporters have been the victims of physical violence and the target of mockery. Others have been arrested and charged with felonies for covering protests.

Against this backdrop, it should come as no surprise that a reporter was arrested for trying to ask a question to a member of Trump’s cabinet. But it can never be accepted as normal.

In the 1971 Supreme Court ruling on the famous Pentagon Papers case, Justice Hugo Black wrote, “The press was to serve the governed, not the governors.” Indeed, when our public representatives — whether the Trump administration or the West Virginia Capitol police — forget that they work for us, we need journalists to remind them. Without a free press, public officials have a much easier time evading accountability, shielding misconduct, and pushing through dangerous policies without public scrutiny. Even Thomas Jefferson, who had a quarrelsome relationship with the press, knew that “our liberty depends on the freedom of the press.”

We need journalists to be able to challenge and question public officials, loudly and persistently. For the government to stand in the way is a frontal assault on the First Amendment and the functioning of our democracy. Those who don’t want transparency in the literal halls of government have no business putting themselves in the political spotlight.

If our elected officials insist on continuing to violate one of our country’s core values, we will see them in court — in defense of Dan Heyman and of any other journalist serving the public’s right to know.