Lee Rowland, Senior Staff Attorney, ACLU Speech, Privacy, and Technology Project
& Dennis Parker, Director, ACLU Racial Justice Program
Tags
Ben Eaton, Mary Schaeffer, Esther Calhoun, and Ellis Long (from left to right) with the ACLU are asking a federal court to dismiss the defamation lawsuit brought against them for standing up to the exploitation of their town.
“We all should have the right to clean air and clean water.”
Would you agree with that sentence? Would you say it yourself? It seems uncontroversial — something kids might be taught in school. Something any of us might say without blinking an eye. Unless, that is, you happened to say it in Uniontown, Alabama — an overwhelmingly Black and poor rural town in the heart of the South’s Black Belt. In Uniontown, it turns out that having the audacity to fight for your fundamental human rights — for instance, by saying the exact sentence above — can get you sued for $30 million in federal court by companies seeking to silence their critics.
View slideshow
Yes, you read that number right. And that’s exactly what has happened to Esther Calhoun, Ben Eaton, Mary Schaeffer, and Ellis Long: four Uniontown residents who banded together to create Black Belt Citizens for Health and Justice — a community organization dedicated to fighting pervasive racial and environmental injustice in Uniontown.  And now, they are four residents who are living through the terrifying reality of being sued for millions of dollars by Green Group Holdings and Howling Coyote —the two companies that own the town’s coal ash landfill — in a meritless lawsuit that risks silencing the kind of political advocacy that lies at the core of the First Amendment’s protections. 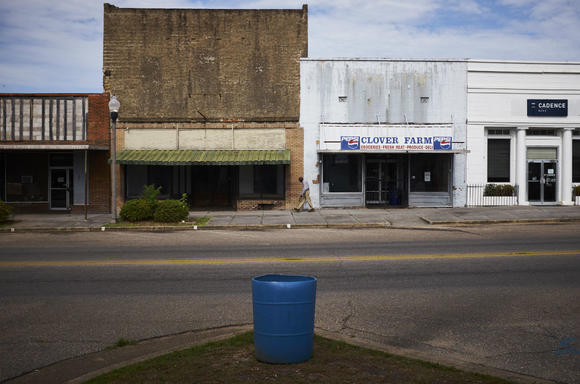 Uniontown, Alabama — where Green Group Holdings and Howling Coyote chose to dump hazardous coal ash from a catastrophic spill in Tennessee — is a poor rural town in the heart of the South's Black Belt. As of 2010, 91 percent of its population was Black, and the per capita annual income was less than $10,000.
Esther, Ben, Mary, and Ellis are really something else. These four diverse and passionate people have crossed longstanding lines of race and class to fight together for human rights in their community. And in Uniontown, that fight is a thankless, principled, infuriating, important, full-time job. It means confronting the reality that Uniontown has, again and again, ended up as a municipal punching bag that plays host to the hazardous waste of richer, whiter areas.
In Uniontown, seeking health and justice means highlighting a municipal sewage “system” that sprays fecal water onto a field while emaciated cattle graze nearby. It means fighting the suffocating smell of aerated whey that is shot into the sky, making the town reek like putrid processed cheese — on a good day. It means following the trail of a $4.8 million Department of Agriculture grant that residents feel just evaporated without any benefit to the citizens it was intended to help.
Fighting for justice in Uniontown means opposing the trains that roll into town carrying hazardous coal ash from 33 states to deposit it at the Arrowhead landfill — a dump bewilderingly located in a residential neighborhood, near wetlands, within this spacious county full of rolling fields and open space. It means worrying about the safety of that coal ash — the very same coal ash that catastrophically leaked out of a Tennessee facility in 2008 and destroyed the surrounding environment before it was hurriedly redirected to Uniontown.
It means being the voice of Black ancestors whose bones lie in graves right next to that landfill. Graves crisscrossed by the deep ruts of tractor tires: desecration that feels like a knife in the heart to those whose relatives are buried there. It means holding the hands of friends and relatives as they die of cancer. (Indeed, among the shockingly few businesses still open in Uniontown are its two funeral homes.) It means asking whether each of these things has happened, or been allowed to happen, because Uniontown is Black. 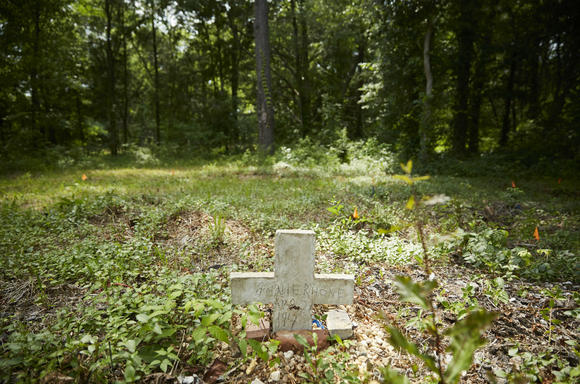 Pictured is one of the remaining tombstones at this Uniontown cemetery. Many of the other tombstones have been moved since the owners of the landfill, Green Group Holdings and Howling Coyote, began using the Arrowhead landfill next to the cemetery. Green Group Holdings has claimed that the graves are being repaired.
Because here’s the horrible truth: The type of environmental exploitation that the residents of Uniontown face every day is impossible to explain without taking race into account. The town’s numerous problems reflect an abject failure at every level of government to value residents’ — Black residents’ — lives and health. And perhaps the greatest tragedy is that people like Esther, Ben, Mary, and Ellis are expected to bear this oppression silently.
In the lawsuit, Green Group and Howling Coyote claim that by advocating against hazardous waste in their town, Esther, Ben, Mary, and Ellis have engaged in “defamation” that’s harmed them to the tune of a cool $30 million. But the only harm evident in this lawsuit is the gripping terror that average citizens — not scientists or paid policy wonks — feel after being sued for millions for speaking their truth in order to protect their community. Fortunately, the First Amendment protects a person’s right to do precisely what Esther, Ben, Mary, and Ellis have so bravely done.
Think again about that sentence: We all should have the right to clean air and clean water. Would you say it if you knew a powerful corporation would sue you for (more than) everything you’ve got? No one should have to make that choice.
The law in this case may focus on the First Amendment, but the story of Esther, Ben, Mary, and Ellis is one about racial justice. In Uniontown, racial justice means environmental justice. And the road to justice starts with voices calling out injustice. The ACLU is representing Esther, Ben, Mary, and Ellis to make sure their voices are not silenced.
Fight for everyone's rights - support the ACLU.
Donate Now
Sign Up For Breaking News Alerts
Close
Related Stories