Most people are at least somewhat aware of Fred Phelps and his Westboro Baptist Church, notorious for protesting military funerals with its "God Hates Fags" and "Thank God for Dead Soldiers" signs. Albert Snyder, the father of slain Iraq war soldier Matthew Snyder, sued Phelps after he protested at Matthew's funeral.

The protestors consulted with the police beforehand, and stood where they were instructed.

The district court jury was told that they could hold Phelps liable in this case if they found the speech at Matthew Snyder's funeral protest outrageous or offensive. And that's exactly what happened: following the jury trial, Snyder was awarded $5 million for the intentional infliction of emotional distress. Phelps appealed that decision to the 4th Circuit Court of Appeals and won; the appeals court found Phelps' speech was protected by the First Amendment.

Snyder appealed that decision, which brought the case, Snyder v. Phelps, before the Supreme Court this morning. The ACLU filed a friend-of-the-court brief in the case urging the Supreme Court to uphold the 4th Circuit's reversal. We argue that the standard used in district court to determine whether Phelps could be held liable encourages the suppression of unpopular speech, and is clearly at odds with the First Amendment.

To be clear: the ACLU strongly disagrees with the protestors' message in this case. But even truly offensive speech is protected by the First Amendment. As ACLU Legal Director Steven Shapiro told NPR this morning:

You can read a transcript of this morning's oral arguments here. (PDF).

The First Amendment was designed to protect offensive and unpopular speech. It is in hard cases like this where our commitment to free speech is most tested, and most important. 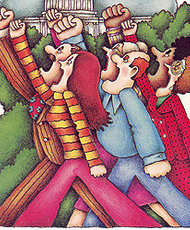