Women have made great strides in the fight for equality, but gender bias continues to create huge barriers for many—especially immigrants, women of color, women with low incomes, and victims of domestic violence. Women's History Month, which begins today, offers an opportunity to celebrate women and the strides we've made towards equality, and to recommit ourselves to the ongoing struggles for women's rights, such as ensuring economic and educational opportunities for all women, ending violence against women, and addressing the harms to women and girls ensnared in the criminal justice system. Read about the Women's Rights Project's recent victories, cases to watch, and more at: www.aclu.org/womenshistory. 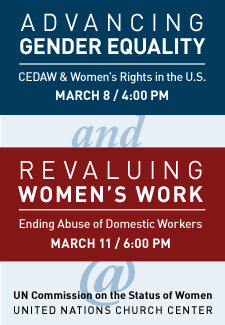 To highlight today's critical women's human rights issues, the ACLU is cosponsoring two events in conjunction with the 54th Session of the United Nations Commission on the Status of Women.

The first event will be held on Monday, March 8 — International Women's Day — and will feature a roundtable discussion with U.S. and international advocates for women's human rights addressing the need of the U.S. to finally ratify the Convention on the Elimination of All Forms of Discrimination against Women (CEDAW). The discussion will focus on CEDAW as an international human rights instrument, its implementation in other countries, and the real impact that U.S. ratification would have on women's lives.

The second event will be held on Thursday March 11 and will feature a screening of Behind Closed Doors, a short documentary film about the exploitation and labor trafficking of South Asian women as domestic workers in the United States. The filmmakers, Pracheta Sharma and Jessica Hopper, will introduce the film, which will be followed by a panel discussion with domestic workers and advocates engaged in local, national, and international movements to protect the human rights of domestic workers and re-value their labor.

Both events are free and open to the public.

During Women's History Month and on International Women's Day, we hope you will join us to celebrate our past successes and reignite our efforts to advance women's human rights!

Pompeo’s New 'Human Rights' Commission is Up To No Good

Creating a Safe Space in the Most Obvious Place: At Home