Is E-Verify Effective? Depends on How You Look at It

Yesterday the New York Times wrote about E-Verify, the system of employment verification tucked into the immigration legislation that passed the Senate later in the afternoon. As the Times notes, E-Verify is "a linchpin of the legislation… [that] would require all employers in the country within five years to use a federal electronic system to verify the legal eligibility to work of every new hire, including American citizens."

We've expressed our concerns many times – about privacy issues, widespread opposition from across the political spectrum, and accuracy issues – but one thing that jumped out of the Times piece was supporters' contention that the system is highly accurate.

Of more than 20.2 million workers run through the system in 2012, only 0.26 percent turned out to be legally authorized after an initial erroneous denial, according to official figures. The system identified 221,155 new hires who did not have legal documents to work in this country. Officials said those figures proved the system was effective.

This framing is odd, to say the least, because it puts the number of wrongful denials in the form of a percentage while describing correct determinations as a number. So let's add flesh to those abstract numbers. Look what happens if you make this an apples to apples comparison: 20.2 million workers x .0026 (.26 percent) = 52,520 workers wrongly identified. 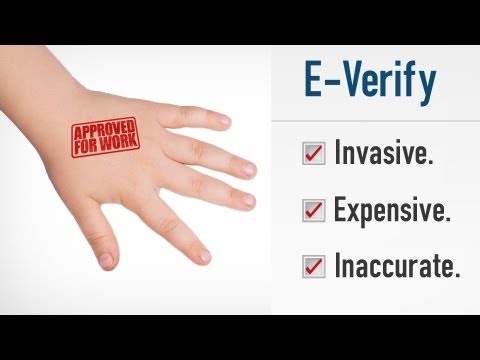 That means that we have 221,155 correct determinations and 52,520 erroneous determinations (where a U.S. worker has to face a daunting bureaucracy and contest the decision before making a living again). In addition, what the article doesn't say is that of 221,155 undocumented workers flagged by the system, 36,000 were people who just didn't contest their determination. In other words, they might have been undocumented but they also might have just moved onto a different job at a place that didn't use E-Verify. (See the numbers for yourself here.)

Perhaps you think that a best case scenario where E-Verify catches 4.5 undocumented workers for every one U.S. worker wrongly identified is a trade worth making but, at a minimum, it's a trade we should clearly understand.

This issue is even starker when you consider what a nationwide E-Verify mandate means. There are currently about 154 million workers in the U.S. A 0.26% error rate represents a best case scenario where 400,000 people will be wrongfully caught up in E-Verify and forced to prove their right to work.

At the end of the day, efficacy may be in the eye of the beholder—though I bet it looks different if you're one of those innocent workers who gets misidentified.

ICE Makes It Impossible for Immigrants in Detention to Contact Lawyers