The Government’s Muslim Ban ‘Guidance’ Is Arbitrary, Illogical, and Discriminatory – Just Like the Ban.

Shortly after the Supreme Court decided that the government could proceed with a very limited part of President Trump’s Muslim ban, the Department of Homeland Security announced that its implementation would “be done professionally, with clear and sufficient public notice, particularly to potentially affected travelers.” Unfortunately, clarity is a far cry from what has unfolded.

The Supreme Court on Monday decided it would review the executive order this October. The court recognized that the ban would impose “concrete hardship” on individuals, companies, schools, and organizations across the country and has not weighed in yet on the full merits of the case — the underlying question of whether or not the ban is constitutional. However, the court did decide that the federal government could bar refugees and people from six overwhelmingly Muslim countries who lack “any bona fide relationship with a person or entity in the United States” from entering the country for a period of between 90 and 120 days.

Yet instead of faithfully complying with the Supreme Court’s order, the federal government is seeking to unilaterally rewrite it. In guidance released yesterday, the government has imposed a set of rules that would ban many people who cannot be barred under the Supreme Court’s directive. That is simply unacceptable.

In describing the types of “bona fide” relationships that exempt an individual from the ban, the Supreme Court explained that the circumstances of the plaintiffs challenging the Muslim ban in two cases before the court “illustrate the sort of relationship that qualifies.” The court elaborated by way of examples: “A foreign national who wishes to enter the United States to live with or visit a family member, like [John] Doe’s wife or Dr. Elshikh’s mother-in-law, clearly has such a relationship.” Rather than heeding the Supreme Court’s guidance, the government has selected a grab bag of family relationships as “close” enough to qualify for an exemption from the ban while leaving other family arbitrarily banned.

So why does the government say those relationships do not count, when the court indicated they do? It has not offered any intelligible explanation.

Among those who remain banned: grandparents, grandchildren, aunts, uncles, nieces, nephews, cousins, brothers-in-laws and sisters-in-law of people in the United States. Not to suggest that we don’t love our mothers-in law, but there is no basis to suggest that a mother-in-law is a closer relation than a grandparent, an aunt, or even a cousin. Those are all blood family relationships with people who often play an outsize role in individuals’ lives from childhood. Indeed, the Supreme Court has previously pointed out our “venerable” tradition of “close relatives” like “uncles, aunts, cousins, and especially grandparents sharing a household along with parents and children.” The line the government has drawn makes no sense at all and will not stand up in court.

The government has already started to back down from its unsupported positions. Yesterday morning, the government barred even the fiancés of U.S. citizens. That rule, like the others described here, was directly contrary to what the Supreme Court ordered. Later in the day, the government changed gears, and now will no longer apply the ban to fiancés.

Similarly, the government seemed, at least at first, intent on ignoring the Supreme Court’s instruction that individuals cannot be banned if they have “a credible claim of a bona fide relationship with [an] entity in the United States.” Examples of entities include schools, businesses, associations, or nonprofit groups. The Supreme Court said that even an “audience” for a lecture would count. And many refugees and individuals from the six banned countries have a “formal, documented,” and good faith relationship with those kinds of organizations.

Rather than heeding the Supreme Court’s guidance, the government has selected a grab bag of family relationships as “close” enough to qualify for an exemption from the ban while leaving other family arbitrarily banned.

By yesterday evening, the government posted official guidance saying that the fact that “an organization has engaged in representational activity” for a potentially banned person, or that a resettlement agency has been working to bring a refugee to the United States, is not enough. But those kinds of organizations are clearly “entities.” And they have “formal, documented” relationships that are more than just an attempt to get around the ban. So there should be no question these relationships qualify under the Supreme Court’s opinion.

So why does the government say those relationships do not count, when the court indicated they do? It has not offered any intelligible explanation. In fact, it simply deleted the part of the guidance that discussed these organizations last night, leaving it unclear hour to hour what ban the government is planning to impose. 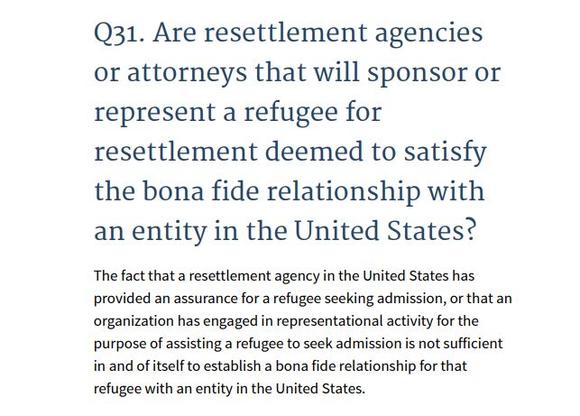 A section of the government’s guidance deleted on Thursday night.

In Hawaii v. Trump, a second case before the Supreme Court challenging the Muslim ban, the state of Hawaii filed an emergency motion on Thursday for a federal judge to step in and require the government to abide by the Supreme Court’s order. We hope that the recent changes in the government’s guidance are a sign that it will abandon these indefensible positions and comply with the court orders.

Just as when the first Muslim ban rolled out on a Friday evening in January, sparking chaos across the country, the government’s decisions have created enormous confusion, uncertainty, and fear. We will continue to fight these arbitrary, illogical, and discriminatory actions every step of the way — including fighting to ensure the courts recognize that any version of the Muslim ban is unconstitutional and harms our communities and cherished values.