Government Use of Tear Gas Is Illegal in War. It Should Be Illegal Here, Too. 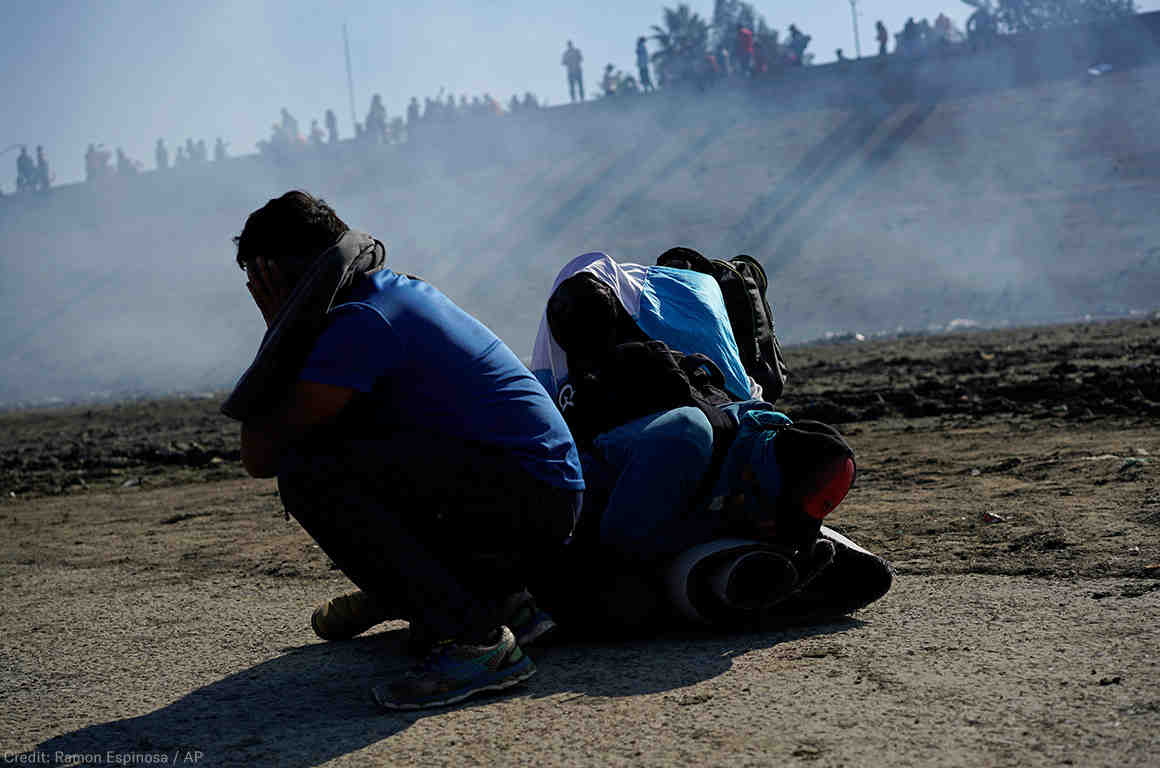 UPDATE 1/2/2018: The U.S. Border Patrol fired tear gas into Mexico for a second time on Tuesday morning in an effort to stop a group of about 150 migrants who were attempting to cross into the United States.

This piece originally appeared at The Washington Post's PostEverything.

Pictures of migrant women and children fleeing in panic as tear gas canisters were fired at them by U.S. border agents this week shocked many Americans, but the Trump administration praised the Border Patrol for responding “admirably and responsibly” in deploying the “accepted use of nonlethal force.”

But using tear gas on a crowd of unarmed, largely peaceful migrants, including children, is far from “accepted.” Under international human rights law, U.S. border officials may use force only when necessary, and the force used must be proportionate to the seriousness of the offense and the legitimate objective to be achieved — when it is necessary to maintain order and protect lives. By the Border Patrol’s own unverified account, only four of its agents were hit by rocks or other projectiles, and their protective gear ensured that they were not injured. That clearly doesn’t justify hurling Triple-Chaser tear gas grenades against a crowd of a few hundred largely peaceful men, women, and children.

And while tear gas has been outlawed as a method of warfare on the battlefield by almost every country in the world, that prohibition does not apply to domestic law enforcement officers using tear gas on their own citizens. Unfortunately, U.S. law enforcement personnel use tear gas all too often against peaceful crowds.

The use of this chemical agent, which can cause physical injury, permanent disability, and even death, is often excessive, indiscriminate, and in violation of civil and human rights. Studies suggest that children are more vulnerable to severe injuries from chemical toxicity: Infants exposed to tear gas can develop severe pneumonitis and require weeks of hospitalization. Using it on a crowd of people who were exercising their right to seek asylum at an international border indeed violated human rights norms; using it on a crowd of U.S. citizens engaged in protest is more common and also fraught.

The first reported domestic use of tear gas was during the 1935 timber workers strike when the National Guard used tear gas against picketers in Tacoma, Washington. During the civil rights movement, the use of tear gas — along with police dogs, fire hoses, whips, and nightsticks — by law enforcement officers against peaceful protesters helped rouse Americans’ sympathies for the demonstrators.

In the 1980s, as international negotiators were drafting an international convention to ban chemical weapons, there were heated debates about the use of tear gas by law enforcement — and calls for its use to be banned. Eventually, negotiators reached a compromise. The Chemical Weapons Convention, which was opened for signature on Jan. 13, 1993, and entered into force on April 29, 1997, banned tear gas (“riot control agents”) as a method of warfare but permitted its use in law enforcement, a decision that has been controversial ever since.

During protests in Ferguson, Missouri, following the police shooting of Michael Brown, police fired tear gas into people’s backyards and set it off near children. Protester Tory Russell was tear gassed over several days in Ferguson, causing him to panic and choke as he struggled to breathe. Russell described the experience to the BBC: “You no longer feel American.” One day during protests, when police fired tear gas into a crowd, people ran into a nearby coffee shop that filled with gas, creating a toxic environment in a confined space. Several sued and reached a settlement with Missouri law enforcement agencies to give proper warnings, adhere to minimum force guidelines, and refrain from using tear gas against lawful protesters.

Over the past several years, the ACLU has filed lawsuits challenging unconstitutional excessive use of force, including tear gas, to disperse peaceful protesters. As one lawsuit in Arizona charged, officers at an anti-Trump rally fired more than 590 projectiles “indiscriminately” into a crowd that “included children, elderly people, disabled people, and pregnant women.” A Phoenix police internal investigation noted that there was a 17-minute gap between when police began deploying smoke, pepper balls, and tear gas on the crowd and the first time officers made a widespread warning to disperse.

Another suit by the ACLU of Utah alleged that correctional officers fired tear gas inside the Utah State Prison after an inmate refused to return to his cell. The gas then traveled through air vents into the cells of other inmates, who suffered burning eyes, lungs, and skin. According to the complaint, prisoners, many of whom thought the jail was on fire, began “desperately trying to get the attention of prison officials by, among other things, kicking, screaming, and repeatedly pressing their emergency response buttons.” They were ignored and left in their cells for 20 to 30 minutes. (An official with the Utah Department of Corrections told the Salt Lake Tribune that tear gas is used infrequently at the prison.)

Not every use of tear gas by police is illegal. But it’s an indiscriminate weapon: Tear gas cannot distinguish between the young and the elderly, the healthy and the sick, the peaceful and the violent; it cannot tell whether a person is an unarmed rallygoer or a curious bystander. That is why it is rarely appropriate to use against protesters, and why its use should be regulated.

The United States has no specific rules regarding tear gas and requires no particular training for its use. When law enforcement officers do use tear gas, they should give clear and easily audible warnings beforehand, ensure that anyone who is not violent is far enough away to be unaffected, and provide prompt medical attention to everyone — violent or not — who is affected.

In a 2016 report on the health consequences of crowd-control weapons, the International Network of Civil Liberties Organizations and Physicians for Human Rights urged law enforcement when using tear gas to exercise special caution to stop the effects from spreading to unintended targets and bystanders and to minimize the risk of overexposure, which causes increased risk of injury. Law enforcement agencies must not exceed the minimum amount of chemical irritant necessary to achieve the effect of irritation and transient incapacitation. Higher concentrations of chemical irritants, which could easily be achieved by firing multiple canisters in the same spot or repeatedly, could cause serious injury or even death and must be avoided. Firing grenades or canisters containing chemical irritants into closed spaces or open space where there is no safe egress should be prohibited, as this significantly increases the gas’s risks.

Contextual factors must always be considered before deploying indiscriminate chemical irritants (the geographical nature of the deployment site, wind patterns, or the existence of hospitals, schools, or dense, uninvolved populations in the vicinity). Firing gas canisters or grenades directly into a crowd or toward individuals must be prohibited.

The use of tear gas against unarmed people fleeing violence in one country — many of them seeking asylum — is cruel and inhumane; it violates U.S. international human rights obligations. By using tear gas against them, our government mocks our obligation to protect the world’s most vulnerable. But the United States needs to rethink how it deploys chemical weapons against its own people, too, especially those who are exercising their right to protest.