My Mother Was Incarcerated in an Internment Camp as a Child. She Tells Us 2016 Reminds Her of 1942.

My mother was seven years old when she and her family were evacuated from the West Coast and forced to live in an Army barrack behind barbed wire in an internment camp in Heart Mountain, Wyoming.

Born in Los Angeles, she had been taught in school to be a proud and loyal American citizen, so the wholesale exclusion and relocation of her community was both terrifying and confusing. On the journey to Wyoming, the prisoners were ordered to keep their shades down when the train passed through towns; my mother thought this must be because people hated her and her community so much that they didn’t want to see their faces. She was incarcerated at Heart Mountain for three years before she and her family were permitted to return to their home in Los Angeles. 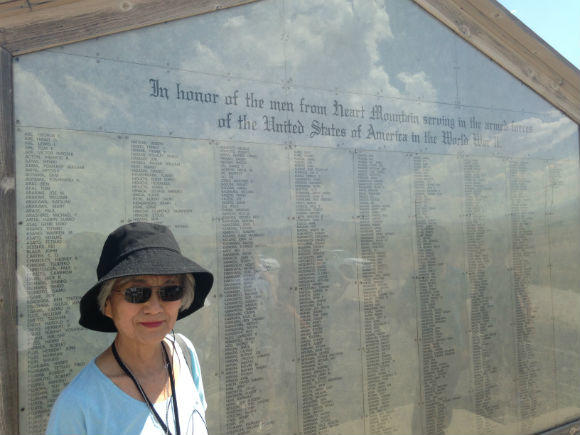 ​My mother in front of the list of men — including both her brothers — who were incarcerated at Heart Mountain and served in the U.S. armed forces in World War

Months ago, my mother told us she was feeling anxious and having trouble sleeping because Donald Trump’s rhetoric and campaign promises were reminding her of that time. Since Trump won the general election, we have heard more reports of anti-Muslim and anti-immigrant vandalism, harassment and violence. Last week, a prominent Trump supporter invoked the Japanese American internment as “precedent” for creating a registry of Muslim Americans.

In the years following the 9/11 attacks, when scapegoating and targeting of Arab and Muslim Americans peaked, the ACLU opposed discriminatory policies and practices and documented abuses. We opposed the NSEERS program — the revival of which is under consideration by President-elect Trump. That program required the registration of tens of thousands of men and boys from Arab- and Muslim-majority countries and subjected them to tracking and travel restrictions. NSEERS was suspended in 2011 after it was showing to be completely ineffective as a tool to protect national security.

Right now, we want to affirm core American values of religious tolerance and inclusion and to remind members of Muslim communities that the ACLU will be vigilant in protecting these values and corresponding rights. We have compiled a great deal of Know Your Rights information for people facing anti-Muslim discrimination and government surveillance based on perceived religion or national origin.

As an adult in the early 80s, my mother participated in the redress movement, seeking an apology and recognition of wrongdoing from the government for its incarceration of Japanese Americans and residents.

A clinical social worker, she testified before the Congressional Committee on Wartime Relocation and Internment of Civilians about the psychological effects of the camps on Japanese American families and individuals. The Commission later issued a report, “Personal Justice Denied,” which details how the government executed the internment against over 120,000 people without individual review, “virtually without regard for their loyalty to the United States,” and “despite that fact that not a single act of espionage, sabotage or fifth column activity was committed” by Japanese Americans or residents. Instead, the report determined that the decisions were based on “race prejudice, war hysteria, and a failure of political leadership.”

My grandparents celebrating their naturalization as U.S. citizens in 1953.

In 1988, President Reagan signed the 1988 Civil Liberties Act, a law whose purposes included acknowledging the “fundamental injustice” of the evacuation, relocation, and internment, to “apologize, on behalf of the people of the United States,” and to “inform the public about the internment . . . so as to prevent the recurrence of any similar event.”

My mother remains a fiercely loyal American. She recently told us she wants “God Bless America” to be played at her funeral. I dearly hope that the work of the Japanese American redress movement and the lawmakers who passed the 1988 Civil Liberties Act have their intended effect of preventing a similar event — namely religious or national origin discrimination against Muslim Americans, immigrants, and visitors.

The ACLU certainly will do everything in our power to prevent it.
Fight for everyone's rights - support the ACLU.
Donate Now
Sign Up For Breaking News Alerts
Close
Related Stories

Obama Can Stop the Trump Administration From Targeting and Discriminating...