The Muslim Ban: What Just Happened?

Earlier this week, the Supreme Court allowed President Trump’s Muslim ban to go into full effect while it is being litigated. Prior to the court’s Dec. 4 order, large portions of the ban were blocked by preliminary injunctions in the cases of IRAP v. Trump and Hawaii v. Trump.

Let’s be clear: The fact that the ban is moving forward is devastating for Muslims in the United States and abroad — and for anyone who values the fundamental constitutional principle of religious equality. The Establishment Clause of the First Amendment prohibits the government from favoring or disfavoring one religion among others, but that’s precisely what President Trump’s Muslim ban does.

It’s important to recognize that the Supreme Court did not express any views about the merits of the ban — and in particular, it did not find or suggest that the ban is constitutional or compatible with our immigration laws. We have been challenging this and previous versions of the ban since President Trump started down this path, and the courts that have reached the merits have repeatedly found the bans unconstitutional and illegal. That is one reason why we believe that the ban will ultimately be struck down.

On Dec. 8, we will be in court, along with our co-counsel from the National Immigration Law Center and the International Refugee Assistance Project and colleagues from Muslim Advocates, the Council on American-Islamic Relations, the Brennan Center for Justice, and Americans United for Separation of Church and State, fighting to strike down the Muslim ban in its entirety. Here’s what you need to know.

On Jan. 27, President Trump signed an executive order that prohibited citizens from seven Muslim-majority countries from entering the United States for 90 days, suspended the entry of all refugees for at least 120 days, and barred Syrian refugees indefinitely.

The damage was immediate — thousands of travelers were detained at airports and families were separated from their loved ones — but so was the pushback. Thousands of people, including members of Congress, showed up at airports across the country in support of Muslims, shouting, “Let them in.” The next day, a federal court blocked deportations under the ban in a case brought by the ACLU and partners, and more court orders quickly followed.

Rather than defend the ban in court, the president issued a new version on March 6. Once again, this Muslim ban was successfully challenged and blocked in a suit brought by the ACLU and partners as well as another case brought by the state of Hawaii. Appeals from these decisions were set for argument before the Supreme Court on Oct. 10, but on Sept. 24, the Trump administration issued a new ban proclamation, thus replacing the second Muslim ban with a third. We returned to district court, securing a new order blocking large portions of the latest ban, which was in effect until Monday when the Supreme Court issued its most recent order.

So what did the Supreme Court’s order do exactly?

The Supreme Court allowed the government to enforce all of the Sep. 24 proclamation, parts of which were previously blocked by lower courts while the case is being litigated.

Who can be banned? And when does it go into effect?

The ban targets citizens of six majority-Muslim countries: Chad, Iran, Libya, Somalia, Syria, and Yemen. The government can now deny visas to nationals of the six banned countries, including people who have a “bona fide” relationship with a person or entity in the United States. This includes relatives of both U.S. citizens and green card holders from the listed countries as well as other visa applicants. The ban affects 150 million people, the vast majority of whom are Muslim.

The ban also puts restrictions on North Korea and Venezuela, two countries that are not Muslim-majority. Their inclusion will have almost no practical effect. In 2016, North Korea accounted for 61 visas that would have been affected by the ban, a tiny fraction of the tens of millions of people who come to this country each year. And only certain Venezuelan government officials and their families are affected, and those individuals are only barred from obtaining tourist and similar visas.

The Supreme Court’s order permits the government to implement the full version of the ban immediately. The order should not impact people who already have valid visas to enter the United States. If you have a valid visa but are stopped at the airport because you are from a banned country, or you know someone in that situation, email airport@refugeerights.org.

Is this version different from the previous two bans?

Yes, it is even worse. There is no time limit. Instead of having a so-called “temporary pause,” the president has instituted an indefinite and potentially permanent ban.

How does this ban impact people’s lives?

This ban tears at the heart of Muslim communities in the United States, reminding them daily that the president openly discriminates against their faith and has instituted policies that embody this prejudice and bigotry. It will separate Muslims in the United States from their family members abroad. It takes away the ability of U.S. citizens and green card holders to live with, or even be visited by, spouses, parents, children, grandparents, and other family members. Among other things, it will exclude friends and family from weddings, graduations, and funerals; prevent grandparents, uncles, and aunts from holding and caring for newborns; deny final visits to ailing relatives; deprive American audiences and scholars of the ability to hear from and collaborate with individuals from the banned countries; and bar talented, promising young people from U.S. universities and companies. The impact of this discriminatory ban is tremendous.

The ban bars citizens of Chad, Iran, Libya, Somalia, Syria, and Yemen from securing immigrant visas, which result in lawful permanent resident status, or a green card, including family-based and employment-based visas. Various nonimmigrant visas — like tourist and temporary business visas, student visas, and exchange visas — are also eliminated for people from Chad, Libya, Syria, Yemen, and Iran as noted in the chart below: 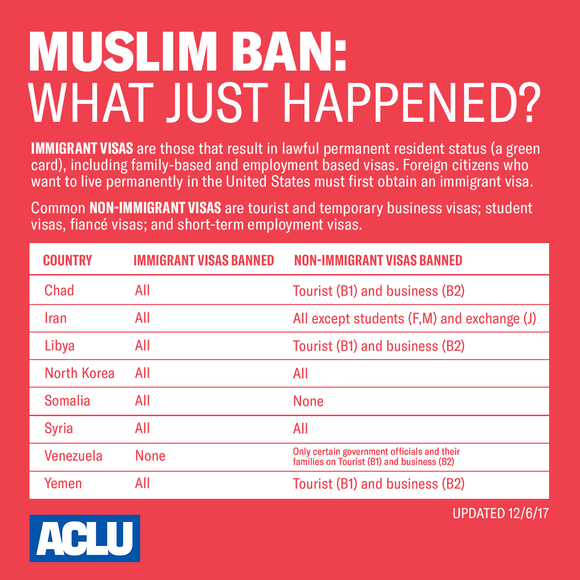 Those who are not impacted by the ban include:

Under the ban, there will be a case-by-case waiver process, where the burden lies on the applicant to demonstrate undue hardship, the absence of a threat to national security and public safety, and that their entry is in the interest of the United States.

As the ACLU and partners challenge the ban in court, what can the public do?

In order to continue to be successful in our efforts to stop the president’s Muslim ban in court, we need everyone’s help.