Today’s Supreme Court decision in Arizona v. United States rightly rejects three parts of Arizona’s controversial SB 1070 law as unconstitutional.  Yet critically, the Court opens the door to racial profiling by upholding the most egregious provision, the “show me your papers” provision, Section 2(B) of the law.  In so doing, however, the Court recognized that in practice Section 2(B) may suffer from constitutional defects that make it vulnerable to legal challenge going forward.  But the Court basically kicked the racial profiling can down the road.  The ACLU will seize this opportunity and continue the battle against laws like SB 1070 which encourage and codify racial profiling of immigrant communities and people of color.

To that end, the ACLU has, so far, raised $ 8.77 million to continue our fight against discriminatory anti-immigrant laws like Arizona’s. We’ll keep fighting in the legislatures, in the courts and on the streets, and we will win. The ACLU, along with our coalition partners, will continue to challenge Arizona and copycat laws in Alabama, Georgia, South Carolina, Utah and Indiana, on other constitutional grounds unaffected by the Supreme Court’s ruling today. We will defend the rights of all Americans by aggressively fighting to keep any new Arizona-inspired, anti-immigrant law from being enacted in other states. America must come together as a nation to join in this critical struggle against the dark clouds of racial injustice. 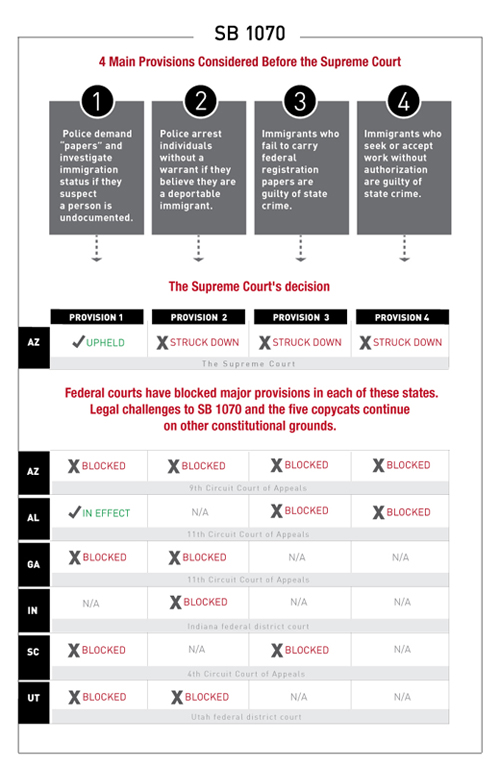 The court’s decision struck down on federal preemption grounds a provision authorizing state officers to arrest immigrants for being deportable and two provisions making new state law crimes for failure to register with the federal government, and for working without federal permission.  Troublingly, the Court upheld the “show me your papers” provision, which requires state and local police to determine the immigration status of anyone suspected of being an undocumented immigrant during traffic stops and other detentions.

As law enforcement leaders across the country have recognized, it is impossible to enforce this kind of law without relying on discriminatory stereotypes based on skin color or accent. Under the Arizona statute approved by the Supreme Court today, the simple acts of taking one’s children to school, buying groceries, or attending church will put citizens and noncitizens alike at risk of being racially profiled and unlawfully detained at the side of the road – or worse, locked up in jail. This draconian law betrays our nation’s promise of equal protection, freedom from arbitrary police action and fundamental fairness.

Although the Court’s decision is deeply disappointing, there are many signs we are already winning this important struggle. Law enforcement leaders have taken a stand against laws like SB 1070, stating publicly that requiring police to ask about immigration status creates a climate of fear, undermines community trust and threatens public safety. Salt Lake City Police Chief Chris Burbank has raised concerns that these laws “invite racial profiling and expand the power of arrest in dangerous ways.” A U.S. Department of Justice investigation reported that local immigration enforcement by Maricopa County Sheriff Joe Arpaio and his deputies resulted in “a widespread pattern and practice of racial profiling of Latinos, and illegal stops and seizures” in the Phoenix area.

Likewise, states have begun to recognize that anti-immigrant laws can devastate already fragile local economies. In Alabama, the economic damage caused by HB 56 is expected to be in the billions of dollars, and the state Agriculture Commissioner has recognized that “the economic hardship to farmers and agribusiness will reverberate throughout Alabama’s economy, as one-fifth of all jobs in our state come from farming.” Farmers are seeing their crops rotting in the fields because the migrant workers on whom they rely have fled the state. The same goes in Georgia, where another anti-immigrant law was enacted. The state has suffered a $300 million estimated loss in harvested crops, with a $1 billion total estimated impact on Georgia’s economy in 2011 alone.

Numerous states are realizing these discriminatory laws are not only costly, but divisive and un-American. The ongoing human rights crisis caused by Alabama’s HB 56 has distressed the entire nation. In Mississippi, lawmakers abandoned an anti-immigrant bill earlier this year, and not a single state legislature has passed a copycat bill in 2012.  Moreover, these cases have cost tax payers millions of dollars. In Hazleton, Penn., news reports revealed the city spent about $500,000 in legal fees and is on the hook for at least $2.4 million for the prevailing side’s attorneys’ fees.   In Farmers Branch, Texas, the city has already paid $3.4 million to defend its law, and may owe another $2 million to the winning side. Both cities’ insurance carriers have refused to cover the legal bills.

Because the Supreme Court essentially punted on the racial profiling aspect of the Arizona statute, the ACLU will use our $ 8.77 million war chest to litigate against any and every statute retained or enacted by state legislatures.

Against this promising backdrop, the ACLU is ready to stand and fight these discriminatory laws, and we hope that you will lend your voice to this struggle. Together with the rich voices of communities of color across this beautiful nation, we will claim the last word on laws that encourage racial profiling.