Matthew Shepard Was Brutally Murdered in Laramie, Wyoming, in 1998. Last Night, the City Passed the First LGBT Nondiscrimination Ordinance in the State.

On October 6, 1998, two young men in Laramie, Wyoming, tricked University of Wyoming student Matthew Shepard into thinking they would give him a ride home from the bar. Eighteen hours later, a cyclist found the gay student tied to a fence, beaten, burned, and comatose with a fractured skull. He initially mistook Shepard's limp frame for a scarecrow.

I revisit what happened to Matthew Shepard because the place where he died, forever since then associated with the savage violence and hatred LGBT Americans face, did something special last night. It made history by passing the first Wyoming nondiscrimination ordinance, with very little public opposition, to protect everyone from discrimination based on sexual orientation and gender identity in housing, employment, and access to public accommodations.

While the tragic incident shone the light on the intolerance and discrimination that the LGBT community faces and highlighted the critical need for civil rights protections for LGBT people across the country, Wyomingites have waited many years for legislation that protects our friends, our family, and our neighbors from discrimination. There are no statewide LGBT protections for those seeking employment, housing, or the opportunities to participate fully in their communities. It is only fitting that Laramie lead the way in Wyoming towards safety, dignity, and fairness for all. We will work now to pass similar laws in other cities, and we will continue working at the statewide level until we secure full protections for all Wyomingites. 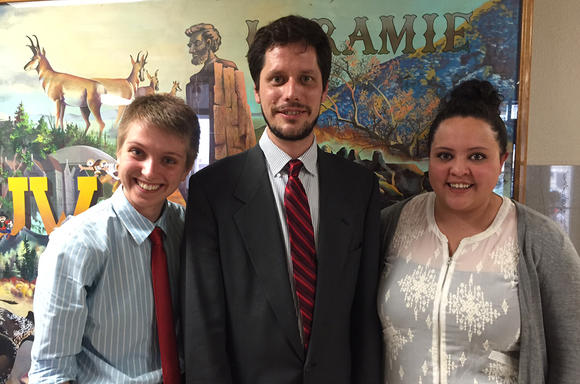 Bria Frame and Will Welch (local organizers) and Melanie Vigil at the NDO vote. The ordinance passed on a 7-2 vote.

We already protect our neighbors from discrimination based on characteristics like race, sex, religion, national origin, and disability. It is time that we protect our neighbors on the basis of sexual orientation and gender identity, too. It's a matter of simple fairness. These long overdue protections will ensure that no Laramie resident fears being turned away from a job, for housing, or by a business just because of who they are, and can live without fear of discrimination based on what their family looks like.

Laramie residents worked hard to get this piece of legislation passed. Local businesses signed pledges to support the ordinance. People had conversations with their friends and family, gathered stories of discrimination, and ultimately showed up to city council meetings to testify their support. Local of people of faith also testified that an ordinance protecting everyone from discrimination was consistent with both their faith and the larger community values.

Laramie's decision stands as a clear message that we reject hate and intolerance, and we hope the rest of the country learns from our message last night. Love and acceptance always wins in the end.

Facebook's Discrimination Against the LGBT Community