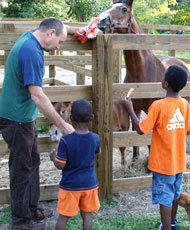 By now, many of you have probably seen news reports, and even late-night comedy routines, about Dr. George Rekers, the anti-gay activist who allegedly hired a young man through Rentboy.com to "carry his luggage" on a European vacation. What you may not know as much about is Dr. Rekers' long fight against gay rights.

As a professor of neuropsychiatry at the University of South Carolina, Rekers had the kind of credentials that give good cover for what turn out to be highly unscientific anti-gay views. And, indeed, he's managed to do incalculable harm to gay people over his lifetime of advocacy in public policy debates and in court. Here's a sampling of what Dr. Rekers has asserted both in his writings and in the trials in Arkansas and Florida:

By presenting reputable experts to demolish all of those assertions, and by cross-examining Dr. Rekers at the Arkansas and Florida trials, we convinced the judges in both cases that Dr. Rekers' opinions were not based on science. The Arkansas judge, ruling our way, explained just what he thought of Dr. Rekers:

Dr. Rekers' willingness to prioritize his personal beliefs over his function as an expert provider of fact rendered his testimony extremely suspect and of little, if any, assistance to the court in resolving the difficult issues presented by this case.

The Florida judge agreed that "Dr. Rekers' testimony was far from a neutral and unbiased recitation of the relevant scientific evidence" and, thus, "the court can not consider his testimony to be credible nor worthy of forming the basis of public policy."

The new allegations about Rekers' personal life probably mark the end of his career as an expert witness. That's a good thing, but it does not erase the harm he's already done to so many.

Finally, I encourage you to read this editorial from the Orlando Sentinel that shows how this story has evolved from an initial focus on the salacious details of an alleged affair to the genuine child welfare tragedy of the adoption ban itself.

Will the Supreme Court Sanction the Use of a Religious Litmus Test For Foster...