President Obama — Now is the Time to Lead on Marriage Fairness 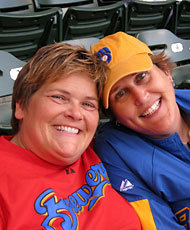 Wednesday's landmark decision by U.S. District Judge Vaughn R. Walker striking down California's Proposition 8 as an unconstitutional violation of the rights of gay and lesbian couples provided President Obama and his administration with the perfect opportunity to finally embrace fairness in marriage. Such a position should not be a far leap for a man who has repeatedly stated his support for the rights of LGBT Americans and is a constitutional scholar, yet it has sadly eluded him, at least publicly, up to this point.

Now is the time for presidential courage and leadership on this issue — a defining milestone along our country's long, and at times haltingly slow, march to equality and justice for all. Years from now, many Americans will likely look back and ask those of us who lived through this period, "Which side were you on in this struggle for equal rights and fundamental fairness?"

As Judge Walker movingly and powerfully wrote in his decision:

For the hundreds of thousands of Californians in gay and lesbian households who are managing their day-to-day lives, this decision affirms the full legal protections and safeguards I believe everyone deserves. At the same time, it provides an opportunity for all Californians to consider our history of leading the way to the future, and our growing reputation of treating all people and their relationships with equal respect and dignity.

And then, on Thursday morning, following a White House statement after the decision that reaffirmed President Obama's opposition to the "divisive and discriminatory" Proposition 8, White House senior adviser David Axelrod stated on MSNBC, "The president does oppose same-sex marriage, but he supports equality for gay and lesbian couples…"

I'm sorry Mr. President, but this Orwellian double-talk and topsy-turvy logic can no longer be allowed to go unchallenged. Marriage for same-sex couples is the central struggle for gay and lesbian couples in our time and they need and deserve better from you. Claiming to support equality for gay and lesbian couples while opposing the actual embodiment of that equality is simply unjustifiable.

As James Esseks, Director of the ACLU's LGBT Project, said, "For the first time, a federal court has conducted a trial and found that there is absolutely no reason to deny same-sex couples the fairness and dignity of marriage." We find ourselves at a strange crossroads where our courts are moving in one direction, while our president remains silent on the sidelines on one of the most critical issues facing the LGBT community.

In addition to explaining why gay and lesbian couples are just as deserving of equal marriage opportunities as opposite-sex couples (it is about respecting the essence of who we are as gay people), the administration, and President Obama in particular, needs to be far more forceful in working to repeal the harmful and discriminatory Defense of Marriage Act (DOMA). In his MSNBC interview, Axelrod said that President Obama believes that governing marriage is an issue best left to the states. However, DOMA forces the federal government to refuse to respect the decisions of those states, and the District of Columbia, which have extended the freedom to marry to their gay and lesbian residents. Aside from expressing his support for repealing DOMA, the Obama administration has shown no inclination to actually work towards repeal.

History has a way of producing moments that allow leaders to…well, lead. We are at such a moment now in the struggle for recognition of the lives of gay and lesbian Americans. Mr. President, it is time for you to exercise presidential leadership on this issue. If you truly support equality and fairness for LGBT Americans, you must support the freedom to marry for gay and lesbian couples. This is your moment Mr. President. Please don't let it slip away from you.

Obama is a coward.