‘I Am Fighting This Fight Because No Kid Should Have to Think So Hard About Performing a Basic and Private Function of Being Alive.’

Gavin Grimm is a 16-year-old male transgender student in Glouster County, Virginia. On January 27, 2016, the ACLU and ACLU of Virginia argued before the U.S. Court of Appeals for the Fourth Circuit to allow Gavin to use the male restroom at school. The U.S. Department of Education and the U.S. Department of Justice have ruled that, under Title IX, schools must allow transgender students to use the restrooms and locker rooms that are consistent with their gender identity. This is the first time that a federal court of appeals will rule on the issue. Below are remarks Gavin delivered after the court arguments.

Standing at the school board meeting last year was equal parts humiliating and terrifying.

Humiliating because, at age 15, I had to witness adults of my community discuss in a public forum some rather intimate details of my anatomy. In plainer words, the anatomy of a 15-year-old was considered appropriate for public conversation by the Gloucester County School Board.

For any kid that would be mortifying. However, for a kid who is transgender, bringing to the forefront of people’s minds the very part of themselves that already makes them dysphoric is incomparably distressing. 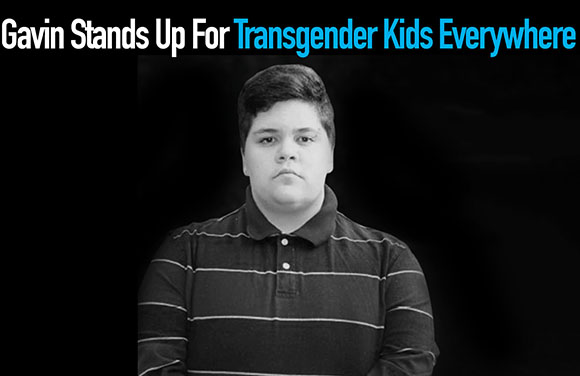 I sat by while people repeatedly called me a girl. "She." "Her." "Young lady." "Confused young lady." Even "freak." Bullying is already an enormous problem for high-school-aged youth, and especially transgender youth. To hear adults of my community treat me as if I was a creature for their ridicule and observation, or some oddity on a stage, was incredibly dehumanizing to an extent I could not possibly convey.

And of course, I was terrified. Firstly, because the school board had the power to bar me from the correct restroom for the rest of my time at Gloucester High School. Secondly, because I was in a room full of adults who thought it appropriate to have this sort of vulgar discussion, who would clap or cheer after every derogatory statement, of which there were many.

After enduring all of that — twice — I felt as though I couldn't possibly take any more hits. But I did, because at the end of the school board meetings, my school board chose to enact a policy that would further alienate and stigmatize me by forcing me to use separate restrooms from all of the other students at school. For me, the thought of going into a separate restroom which might as well have been labelled "other" was just far too much to bear. The trek to the restroom in the nurse’s office each time it was necessary was similarly humiliating, similarly upsetting and othering and dysphoria-inducing. The only difference was that it was just slightly less conspicuous.

I hope that I will be one of the last kids that has to go through something like this, and I am going to do what I can to ensure that.

I am fighting this fight because no kid should have to think so hard about performing a basic and private function of being alive. No kid struggling to be accepted, and struggling to accept themselves, should have to simultaneously battle for the right to use the correct bathroom. That is why I have come to this point. I hope that I will be one of the last kids that has to go through something like this, and I am going to do what I can to ensure that.

Attacks on Trans Athletes are Also an Attack on Intersex People