This Supreme Court Case Could Affect Trans Lives for Generations

In a new video featuring ACLU client Gavin Grimm and his mom Deirdre Grimm, the two reflect on Gavin’s fight to be treated with dignity and respect by his school board in Gloucester County, Virginia — a journey that has taken them all the way to the Supreme Court of the United States where his case will be heard on March 28.

Gavin is a 17-year-old boy. But because he is transgender, his school board passed a policy barring him from sharing facilities with the rest of his peers. Rather than use the boys’ restroom that all other boys use, Gavin is forced into a converted utility closet or another, separate, stigmatized space every time he needs to use the restroom during the day.

This decision to segregate and stigmatize Gavin was not the school’s initial reaction to learning he was transgender.

Before the start of his sophomore year, Gavin and his parents informed the school that Gavin is a boy and that, consistent with his medical treatment, needed to be treated as a boy for all purposes, including when using the restroom. The principal and others at Gavin’s school agreed. As educators, they likely recognized the critical importance of showing all kids that their school is on their side and won’t model and authorize bullying of kids who may be seen by their peers as different.

It wasn’t until adults in the community began to complain to the Gloucester County School Board that his restroom use became the subject of public controversy. With pressure from residents of Gloucester County — some of whom threatened to vote members of the school board out of office if they did not expel Gavin from the boys’ restroom — the Gloucester County School Board passed a policy barring kids with “gender identity issues” from restrooms that matched their gender. This meant that Gavin was banished from the restrooms that his peers used, publicly humiliated before his community, and essentially told he was unfit to be an equal member of his school.

Challenging the board’s policy as a deprivation of his rights to equal educational opportunities under federal law and his constitutional right to equal protection, Gavin filed a lawsuit at the end of his sophomore year. Now in his senior year, Gavin has spent his entire high school career fighting just to be treated like any other boy. He has endured public mockery and rejection. He has listened to adults shame him and his body, compare him to a dog, and call him a freak. And through it all, he has persisted in believing that he is deserving of dignity, humanity, and respect even in the face of opposition to his very existence. Imagine the fortitude and resilience it would take to navigate high school under these conditions.  Gavin is a model of bravery and will be remembered as a hero in the fight for justice for trans people.

Now, Gavin’s case has reached the Supreme Court, and the justices are poised to decide the scope of legal protections for Gavin and transgender people across the country.

Though often framed as a “restroom case,” this case is about so much more, and the stakes could not be higher. The court’s decision will impact the lives of hundreds of thousands of transgender people across the country.

If transgender people are not protected under the law, if we cannot safely go to restrooms that match who we are, then we cannot have jobs, we cannot go to school, we cannot participate in public life. That is what is at stake.

“I didn’t even know what transgender was when this all started. One of the first things I read was that almost 50 percent of these kids try to commit suicide. As a parent, that is all you really need to know to support your child.”

That’s all any of us should need to know to support kids like Gavin.

This case will affect trans people for generations, and we need to stand together between now and March 28 and show the court that we will not accept rolling back the clock on progress and decency.

We have been here before. In 1986, the Supreme Court upheld criminal bans on sexual activity between consenting adults of the same sex in Bowers v. Hardwick. “None of the [constitutional] rights announced in [our precedent] bears any resemblance to … claimed constitutional right of homosexuals to engage in acts of sodomy,” wrote Justice Byron White. “No connection between family, marriage, or procreation on the one hand and homosexual activity on the other has been demonstrated.” The decision was a blow to the dignity, humanity, and, indeed, the very survival of the LGBT community.

In 2013, Justice Anthony Kennedy, writing for the majority in Lawrence v. Texas, invalidated the Bowers’ decision. “Bowers was not correct when it was decided, and it is not correct today,” he wrote. “It ought not to remain binding precedent. Bowers v. Hardwick should be and now is overruled.”

But for 17 years, that wrongly decided case justified sweeping, legally sanctioned discrimination against gay, lesbian, and bisexual people. It affected a generation or more of people who struggled to navigate a society that justified the criminalization of the very essence of who we are as people.

Now the court is considering another case that could authorize legally sanctioned discrimination for decades. Opponents of trans people are urging that the rights trans people demand are so far outside of what the law protects — that we are freaks, that we seek special rights, that our bodies are incompatible with society. None of that is true. We seek simply to be protected from discrimination and afforded the same dignity and rights of our peers and colleagues.

We have heard this all before. It was wrong it 1986, and it is wrong today.

"Most transexuals were sexually abused in childhood." "And gay/lesbian groups are apologists for Transexuals." I am gay and know MANY other gay and transexual people. If you put in the effort to be an empathetic and kind person to meet someone personally who is transexual instead of being so outrageously ignorant, you will quickly realize how normal a human "transexuals" are, except for the fact that they were born in a body they did not identify with. How dare you talk this way without being informed on any real fact or logical whatsoever. I often ponder how people could be so satisfied with themselves spewing such hatred?

We see you, posting your hateful comments one after another, pretending to be several different people. I feel really sorry for you, there is no love in your heart.

You certainly have given this much thought. And what a load of disgusting made up c(rap. I'm guessing you're old, white and male, I'm also guessing closet pedophile.

You are completely wrong. Sexual orientation and gender identity are unrelated. Cite the scientific studies supporting the idea that most trans folks have been sexually assaulted. You will not find evidence for that statement.

Placing aside the rest of your ridiculous comment, "All transexuals are homosexual/lesbian" is a patently false statement. Why in the world do you--and, unfortunately, so many others--think you get to define other people's sexual orientations for them? I doubt you'd be too enthused if someone insisted that they knew better than you did what you were attracted to and what was going on inside your head.

I am not a Christian but there are topics where I agree with Christian groups. I agree with Christians on the dangers of gay/lesbian agenda and there are many non-Christians and even some atheists who agree with Evangelical Christians. With homosexuality, if knowing and willing adults want to do gay/lesbian conduct, then its their life. Homosexual/lesbian conduct is bad for health as smoking is and needs to be marginalized like smoking is. They must abolish sex change maimings. I’m against sex changes for the same reason as I oppose trying to make a White person Black or viceversa because they think they were born of another race. Sex changes are a sad waste of science. Sex changes happen because science knows how. If they knew how to change skin color, Drs. would be making the same justifications for changing color of people who think they are of other race as they now do for sex changes. it doesn’t take an expert to know that hormone shots + the maiming surgery damages the body. Transexuals have antisocial personalities.

A personal attack that people sometimes make against those who are against gay/lesbian behaviors is to accuse people of being homosexuals. They say this hoping for a reaction-talk of homosexual/lesbian is a good thing, yet call people gay as an insult. I don't think any1 can rebut conclusion that sex abuse victims of gay/lesbian pedophiles have more risk of turning out gay/lesbian by copying the conduct they learned because conduct incl. sexual conduct can be learned. possible for people who are victims of same sex molestation (such as victims of gay pedophile priests) to copy this sexual conduct and do gay conduct in adulthood incl. turn out to be gay pedophiles.

This ignorance is only less outrageous than the opposition's unwillingness to stay out of other people's personal, sexual, gender identity, right to self determination and right.to make medical and surgical decisions with the support of trained professionals and family. It's nothing to you if a transgender person uses medical professionally to correct their physical features to match their gender identity. the statements in this thread calling medical procedures maiming and worse chatter is abhorent.

So much ignorance. So many words. Please, for the sake of your children and your community, please read something to spark enlightenment. 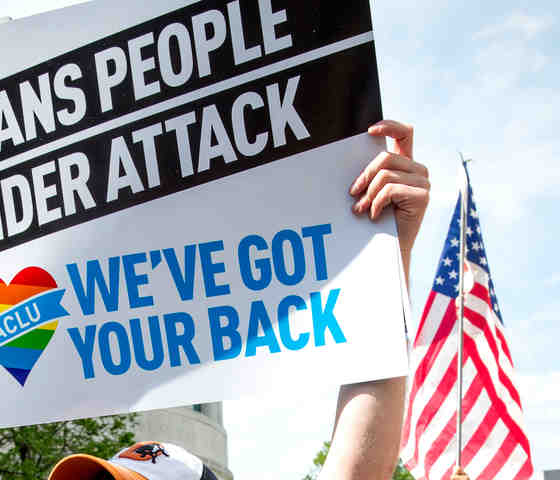