Texas Gov. Greg Abbott Will Have Blood on His Hands if He Signs Two Anti-LGBTQ Bills Before Him

One bill, Senate Bill 2078, targets transgender young people in schools and the other, House Bill 3859, allows foster care agencies to discriminate against children in foster care and potentially disqualify LGBTQ families from the state’s foster and adoption system based on religious or moral beliefs. Both bills take aim at vulnerable young people. Both are animated by an investment in stoking fear of trans people and the entire LGBTQ community. Both are part of a coordinated effort by powerful factions of the Texas government to send the message to LGBTQ people across the state that they are not safe or welcome.

For a few weeks, it appeared as though Texans might be spared a law targeting trans and intersex people when using the restroom with the House Speaker Joe Straus referring to such a measure as “manufactured and unnecessary.” Indeed, former North Carolina Gov. Pat McCrory may have some thoughts from the unemployment line about just how costly and unnecessary such legislation is.

But under threat of a special session by Lt. Gov. Dan Patrick, who has made targeting trans youth a top priority, the House amended anti-trans provisions onto SB 2078 yesterday, a bill that deals with “multihazard emergency operations plans” in schools.

This is real life.

With all that we have to contend with in society, lawmakers are prioritizing rules that bar trans young people from the restroom at school. Based on the rhetoric in Texas, it is clear that the existence of trans people is actually considered an “emergency” and the goal of this type of legislation is to legislate us out of existence. Particularly cruel is the fact that the bill zeroes in on trans young people.

Now HB 3859 and likely SB 2078 — which still has to go back to the Senate for approval by that chamber — will land on the desk of Gov. Greg Abbott for his signature.

Hopefully, Gov. Abbott has gained some empathy for the young trans people in his state over the past year since he mocked the Obama Administration for clarifying federal protections for trans youth in schools, tweeting in May of 2016: 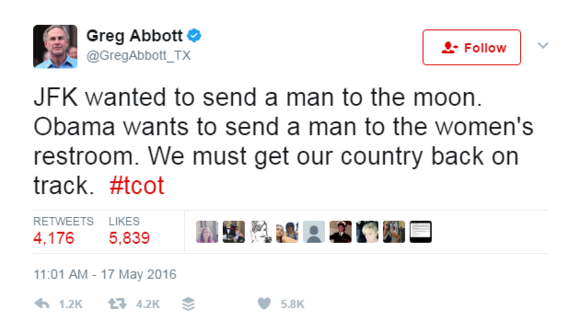 The governor may think it is funny to make a joke and undermine the existence of trans people, but for the trans people and their families who reside across Texas, his glib cruelty might have deadly consequences.

The existence of transgender people threatens no one — not in the restroom, not in school, not in a locker room, not when walking down the street. What is threatened, however, is the safety of the trans community. This is particularly the case when lawmakers situate trans bodies as an emergency threat that needs to be managed and expelled from public space. Trans youth are listening and watching, and what they are experiencing is an attack on their humanity.

Gov. Abbott has a choice to make. He can sign SB 2078 and HB 3859, codifying discrimination and risking lives, or he can veto these measures and save lives and save his state money. History will not remember him kindly if he acts on the side of discrimination and plays politics with the lives of trans youth and foster youth and young people struggling to find their way safely through the world.

At the end of the day, I hope Gov. Abbott does the right thing and vetoes SB 2078 and HB 3859. But I am not going to count on that. Instead, I am going to invest in and count on my community of LGBTQ people across Texas and the country who will continue to fight for justice. Particularly to the trans young people in Texas and around the country watching this nightmare unfold, please know that we are here.

As I have written to you before, “As a trans person who has fought many demons to fight beside you today, I will never give up this fight. We have existed through time and persisted through time. Look to your elders and they will look to you. Our future is bright even when they try to shut down the dreams that sustain us.”

You are beautiful just as you are.