UPDATE (7/14/2017):  The ACLU today filed with the Alabama State Bar's Disciplinary Committee another amendment to our bar ethics complaint against Attorney General Sessions, who is licensed to practice law in Alabama. The amendment gives the Alabama Disciplinary Committee a copy of a national security clearance application, showing Sessions's false answer. Today's filing also provides more information related to our initial bar complaint against Sessions for lying under oath to Congress about whether he met with Russian officials as well as our earlier amendment that provided background on media reports of additional meetings between Sessions and Russian officials. We have alleged that Mr. Sessions violated the Alabama Rules of Professional Conduct.

Attorney General Jeff Sessions, the nation’s top law enforcement officer, is once again playing fast and loose with the law.

In addition to investigating Sessions for allegedly perjuring himself during his Senate confirmation hearing and possibly having a role in obstructing justice in the firing of FBI Director James Comey, special counsel Robert Mueller will also have to investigate Sessions for any crimes in making a false statement in his security clearance application.

On June 12, a judge ordered Sessions’s Justice Department to release a security clearance form that detailed his contacts with the Russian government within 30 days to a watchdog group, American Oversight. The group sued under the Freedom of Information Act in April for the information. The deadline for releasing the part of the form, known as an SF-86, was yesterday, July 12.

Initially, NPR reported that the Justice Department was refusing to release the form in defiance of the judge. This morning, the agency did release the relevant portion of the SF-86 form, heavily redacted, but still clearly showing that Sessions checked “no” to the question:

"Have you or any of your immediate family in the past seven (7) years had any contact with a foreign government, its establishment (such as embassy, consulate, agency, military service, intelligence or security service, etc.) or its representatives, whether inside or outside the U.S.?"

Sessions’s answer in the SF-86 form repeats the false statement that he has made again and again about his contacts with Russian officials. During his confirmation hearing in January, Sessions told the Senate Judiciary Committee — in sworn testimony — that he “did not have communications with the Russians.” Soon after, Sen. Patrick Leahy (D-Vt.) followed up with a letter to Sessions that again asked him if he had contact with Russian officials before the election. He wrote back a one-word response to the question: “No.” 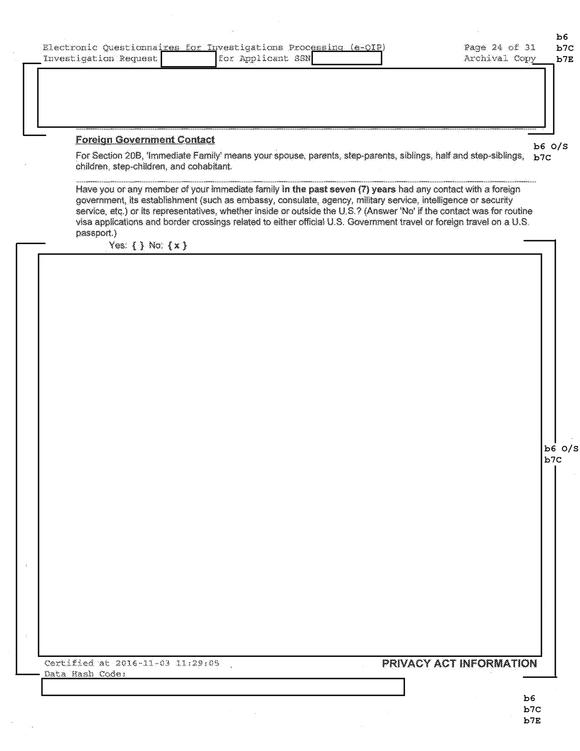 Both answers were false. Before the November election, Sessions spoke to Sergey Kislyak, the Russian ambassador to the United States, at least twice, including once in his Senate office last September. When caught in that deception, Sessions tried to minimize the meeting, saying that he and Kislyak did not discuss the election.

The redacted SF-86 form, combined with his false testimony before the Senate, makes it clear the attorney general is lying to the American people. Knowing whether the nation’s top law enforcement officer had inappropriate communications with a foreign government, which the U.S. intelligence community says interfered with the election, is absolutely critical to maintaining the integrity of not only the federal justice system but the government itself.

On Wednesday, Sarah Huckabee Sanders, the White House’s deputy press secretary, had the gall to say that the administration’s goal “is to be as transparent as humanly possible.” Such a statement is laughable considering President Trump’s refusal to disclose his tax returns or his initial rationale for firing FBI Director Jim Comey. If the White House wanted to make even a small gesture toward transparency, it could release the unredacted portion of Sessions’s SF-86 form as well as the SF-86 forms for all other former Trump campaign and advisors who are now serving in the Trump administration.