Church, State and LGBT Rights: ACLU's Daniel Mach Appears on In The Life 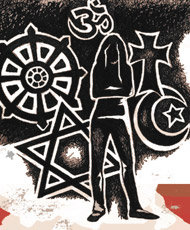 This month's installment of the documentary television program In the Life features our own Daniel Mach of the Program on Freedom of Religion and Belief. Each month, In the Life highlights an issue of importance to the LGBT community. Dan was asked to appear to speak about the theme of this month's episode, "Democracy or Theocracy?" explaining how the role of religion in government affects the gay community.

Among other issues, Dan speaks about the ongoing case Pedriera vs. Kentucky Baptist Homes for Children. Alicia Pedreira was fired from her job at a publicly-funded Baptist group home for wards of the State of Kentucky because she didn't observe the organization's belief that being a lesbian is sinful. On the day she was fired, the organization passed a written policy that homosexuality would prohibit employment at the organization because it is inconsistent with its Christian values.

Dan also speaks about Proposition 8, saying that the government has no right telling LGBT people that they don't have the same rights as other people and should not support religious viewpoints.

The program airs throughout the month on public television. Check your local listings for airtimes or watch the video online.

The Government is Using its Foreign Intelligence Spying Powers for Routine...