Combat in Our Genes?

Born soldiers may say they have "combat in our genes" — but a new report suggests the Pentagon may want to give the phrase whole new meaning by turning DNA into the next military battleground.

The report, prepared by a defense science advisory panel known as JASON and reported by Secrecy News and HuffPost's Dan Froomkin, among others, recommends that the military take advantage of the rapidly falling cost of gene sequencing by preparing to engage in the mass sequencing of the genomes of all military personnel. According to the report, the Department of Defense (DoD) and the Veteran's Administration (VA)

may be uniquely positioned to make great advances in this space. DoD has a large population of possible participants that can provide quality information on phenotype and the necessary DNA samples. The VA has enormous reach-back potential, wherein archived medical records and DNA samples could allow immediate longitudinal studies to be conducted.

Specifically, the report recommends that the Pentagon begin collecting sequencing soldiers' DNA for "diagnostic and predictive applications." It recommends that the military begin seeking correlations between soldiers' genotypes and phenotypes (outward characteristics) "of relevance to the military" in order to correlate the two. And the report says — without offering details — that both "offensive and defensive military operations" could be affected.

It is certainly true that soldiers have reduced privacy rights — but there are limits. The military should not, for example, read all the personal correspondence of everyone in the services. There have been terrible instances of human experimentation (chemical, radiation and drug) on soldiers in the past, now recognized by all as unacceptable. Though enlistees sign many of their rights away, agreeing to serve in the armed forces in our democratic nation does not mean it's open season on them for whatever experiments the military brass might get a notion to conduct. Especially when conducting those experiments violates the norms of the rest of our society and exposes soldiers to the same harms as everyone else.

And it is pretty clear that forcibly stripping people of their genetic privacy does violate American norms and expectations. A 2004 survey by the Johns Hopkins Genetics and Public Policy Center found that 92 percent of Americans felt that employers should not be able to access genetic test results or make decisions based upon them. And in 2008, Congress passed — almost unanimously — the Genetic Information Nondiscrimination Act (GINA), which bans the use of genomic information by employees (and also health insurance companies). GINA does not apply to members of the military, but it is proof of a consensus in this country that people should not be discriminated upon on the basis of their genetic code.

In addition, there are questions about how worthwhile such an intrusive and expensive undertaking would be. People are now and have always been judged, sorted and promoted based upon their abilities as evidenced in the real world. Insofar as part of the idea seems to be that the military will be able to discover and effectively make use of some "shortcut" to discovering talent through genetic analysis — that is almost certainly an illusory pipe dream.

Supporters might argue that lives are at stake in the military, and that is certainly true. But lives are also at stake in emergency rooms, cockpits, police stations and fire stations around America, and many other places, and all those workers' genetic privacy is protected.

As the Council for Responsible Genetics points out in its useful Genetic Privacy Manual, and as two experts point out in this article on the military use of genetics, the military already collects DNA samples from soldiers and currently holds 3.2 million samples — a policy originally instituted to help identify the remains of soldiers fallen in combat. Later, the rules were expanded to allow for the use of those samples in criminal investigations. But a sample used for identification (which is based on only one tiny portion of the genetic code) is far, far different from analyzing the entire genetic code of service personnel.

Mass genetic analysis would be a classic case of a slippery slope in action. And once that happened, who knows what other kinds of uses and discrimination would take place based on soldiers' genetic codes. Only rarely do genes closely correlate with complex human characteristics — in most cases they are but a contributing factor in a complex swirl of causes. But laypersons frequently do not understand this, the media often oversimplifies the latest findings, and it's not hard to imagine military decisionmakers at various levels acting on misunderstood headlines.

If the Pentagon has strong, nonspeculative reasons to believe that genetic research could help military effectiveness, or if it wants to make use of genetics to help with medical care just like the rest of the medical world, then let it operate in exactly the same way that civilian scientists would, under accepted scientific protocols, including meaningful informed consent, Institutional Review Boards, and other accepted standards of human-subject research.

Soldiers, having signed away many of their rights upon enlistment, should not be used for research that would not otherwise comport with our values, just because they are conveniently available.

Our enormous military establishment is a whole world unto itself, and there is no good reason why that world should depart from the standards that Congress so definitively banned in the rest of the employment world. Congress should prohibit the military from spending money on sequencing individual soldiers' genomes (without individualized medical or forensic cause) or carrying out large-scale research on soldiers' DNA. 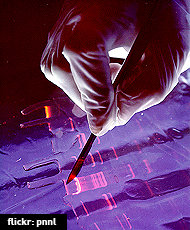