An American being held without charges by the U.S. military in Iraq has asked for an attorney, the ACLU finally learned last night following an extraordinary court hearing. The government is resisting our efforts to make contact with the man so he can challenge his detention, in an outrageous violation of the basic rights guaranteed to every American by the Constitution.

The military has held the “unnamed detainee” — as the government refers to him in its filings — somewhere in Iraq since mid-September as an “enemy combatant” for allegedly fighting in Syria with ISIS (although the government hasn’t presented any evidence of that). The Pentagon and Justice Department ignored our initial request to offer him legal assistance. We then filed a habeas corpus petition on his behalf in court in Washington, demanding that the government justify the man’s detention.

At the first hearing in the habeas case Thursday, the judge started off by asking the Justice Department attorney two questions that she thought would be easy: whether the citizen has been advised of his constitutional rights and if he has asserted his right to an attorney. The government attorney demurred, saying that the Defense Department had not released that information.

“You’re not answering my question, and I’m not trying to be impatient, but I’m growing impatient,” said Judge Tanya Chutkan after some back-and-forth. “I’m amazed you didn’t come to this hearing with that information.”

Judge Chutkan ordered the Justice Department to provide her with the answers to her questions by 5 p.m. — an unusually tight deadline for a judge to impose on the government.

At 5 p.m. on the dot, we got our answers: he was advised of his Miranda rights and he asked for an attorney. In the government’s filing, we also learned more details about what’s been happening to this American while he’s been in U.S. custody. He has been interrogated by FBI agents “for law enforcement purposes,” and they advised him of his right to remain silent and his right to an attorney. The filing also implied that the American has been questioned by other people, presumably for intelligence purposes.

The individual stated he understood his rights, and said he was willing to talk to the agents but also stated that since he was in a new phase, he felt he should have an attorney present. The agents explained that due to his current situation, it was unknown when he would be able to have an attorney, and the individual stated that it was ok and that he is a patient man. The individual then asked whether when he saw the agents next with his attorney, would it be at his current location or somewhere else. The agents told him they were uncertain when they would see him again. No further questioning of the individual for law enforcement purposes has taken place.

Now that we have this information, we’ve asked the court to order the government to ask the American if he wants to challenge his detention in court and whether he wants the ACLU to represent him or have the court appoint other attorneys for him. The government has opposed this, continuing in its effort to get our case dismissed.

The government is arguing that we don’t have standing to file on the citizen’s behalf because we haven’t been in touch with him. But, as Judge Chutkan pointed out at the hearing, that’s a circular argument and a barrier of the government’s own making, since it refuses to even name the citizen. She also noted that the ACLU is not just some random person trying to get involved in a case without any connection.

The fact that the government is refusing to provide the unidentified citizen with an attorney after he asked for one is unacceptable, especially in light of the fact that he has been detained for so long. The government has said that it is working “diligently” to determine what it ominously and ambiguously calls his “final disposition.” In the meantime, the judge in the case on Friday scheduled an additional hearing for December 8.

“It’s been two and a half months — I'd like to know how long you think you get to do this to a United States citizen… Six months? A year?” Judge Chutkan asked. “Basically, it’s just, ‘Trust us, we know what we're doing.’”

The International Committee of the Red Cross was given access to the American to ensure that his detention conditions adhere to the Geneva Conventions, and the government argues that he could have asked the ICRC to convey his desire for an attorney to his family. But securing a lawyer isn’t the ICRC’s job. And maybe his family can’t be located, or maybe they are afraid of retaliation if the family gets involved. Maybe they don’t have the ability to find a lawyer in the United States.

Judge Chutkan recognized how dangerous the government’s claims are.

“The government could snatch any U.S. citizen off the street and hold them as an enemy combatant… for as long as it took to come to some ‘final disposition,’” she posited. “That kind of unchecked power is, quite frankly, frightening.”

Amazing! Thank you for protecting ALL of us!

Onetime my Harley was riding me and I got aids. I didn’t know for years. Every time I got on my bike I suspected it gave me aids but I wasn’t sure until the doctor told me. Son, your Harley gave you aids right in your poofter. Then he called me a fag. He’s right, I’m the fag with a 1%er badge that lost Vietnam.

Oh yeah, Jesus was an angry alcoholic gay Jew with a foot fetish.

In 2017 the reality is actually far worse than the fictional movie "The Rock" featuring Sean Connery.

In the movie, the senior FBI supervisor is one of the villains that throws a totally innocent foreign intelligence officer in prison, played by Sean Connery.

The reality is far more scary, the U.S. government now assumes the authority to kidnap any American, throw them in prison without charge, then refuse to let a co-equal branch of government do their duty of checks & balances. They even refuse to give the accused an attorney.

For some reason, so-called Conservatives and Tea Party voters are not concerned or outraged by this unAmerican practice.

An adversarial discovery process by a court and jury is how we find out the truth and test the integrity of accusers, witnesses and executive branch officials. This process is far more accurate process than any intelligence or security agency.

No, just any American, only Americans with direct or have alleged participation in the activities of ISIS. Well, nobody knows how this person ended up in U.S. Military hands, but I'm likely to wager that one of the many groups either captured the person or this person surrendered to opposing forces. Once the opposing force learned that this person identified themselves as a U.S. Citizen, this person was quickly handled over the U.S. Military.

But since this individual has been denied dur process, there's no way to determine whether charges of his alleged involvement with Daesh have any validity at all.

I'm curious. Which prison was Sean Connery playing in that movie?

He's one he'll of an actor...but a whole prison? That's a big role. Maybe it was just one wing.

The Founding Fathers never trusted government, including ours. Supposedly most real conservatives don't trust government either.

Maybe the government is telling the truth, maybe they aren't. Without giving the accused an attorney and adversarial trial - none of us know what the truth is. More importantly if the government can accuse anyone of anything - without checks & balances - none of us are safe! You may want to look up the Tonkin Gulf during the Vietnam War, all governments lie.

Rule of thumb: The greatest perceived "enemy" to many local, state and federal officials is the "First Amendment" - they fear freedom more than criminals or enemies.

The First Amendment guarantees Freedom of Speech, Freedom to petition and even complain to your government, Freedom of the Press, Freedom to associate with anyone you please, Freedom of religion and Freedom from religion. The Bill of Rights as a package guarantee the right to be left alone by the government as long one complies with the law and Constitution.

"For some reason, so-called Conservatives and Tea Party voters are not concerned or outraged by this unAmerican practice. "

That's because this guy is a Muslim, and to those so-called conservatives - the Tea Party types and Trump supporters, Muslims are not human beings and thus should not be treated as such. As for regular conservatives, they don't speak up because they never speak up about anything - it's just not their way. When any conservative does speak up, the only ones we ever hear from are the kooks on the fringes, and then only when it suits their agenda.

This case - does not fit with their anti-Muslim agenda - so they could not care any less about this injustice. 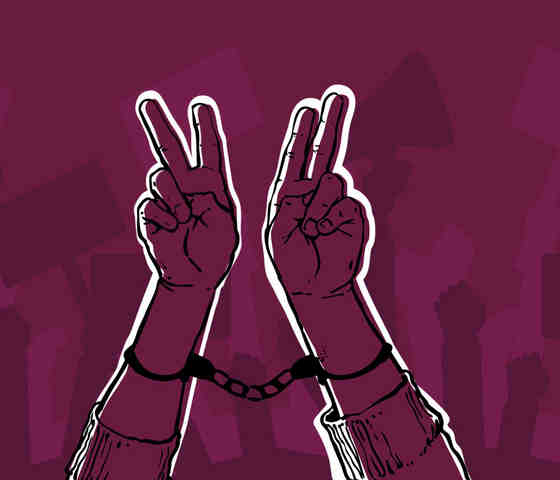 The Trump Administration is Unlawfully Detaining a U.S. Resident Without Charge

U.S. Citizen, Detained Without Charge by Trump Administration for a Year, Is...