The 75th Anniversary of E.O. 9066 Is a Solemn Reminder to Fight Back Against the Trump Administration’s Fearmongering 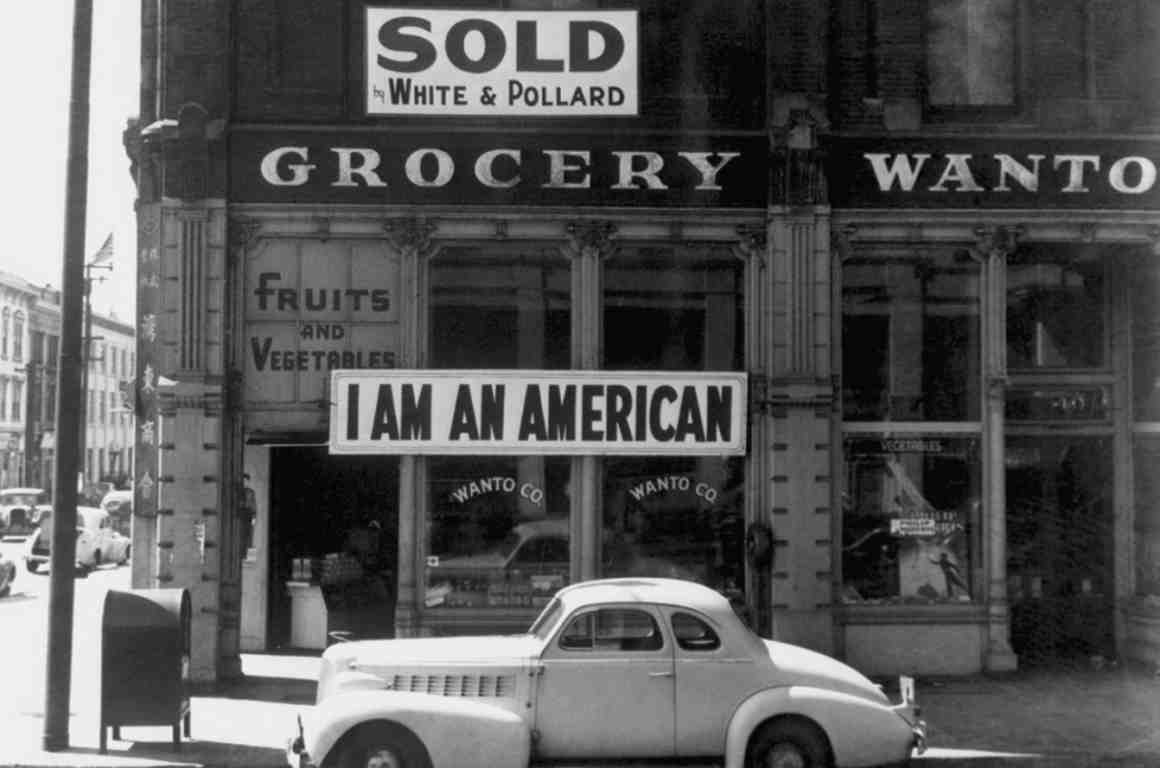 Oakland, Calif., Mar. 1942. A large sign reading "I am an American" placed in the window of a store on December 8, the day after Pearl Harbor. The store was eventually closed after the issuance of E.O. 9066. (Photo: Dorothea Lange)

Seventy-five years ago, in one of the darkest moments in American history, President Franklin Roosevelt issued Executive Order 9066. Immediately, the federal government began forcing 110,000 Americans of Japanese ancestry into concentration camps for fear they posed a threat to national security.

For many years, we have recognized the infamous date of the order, February 19, 1942, with a “Day of Remembrance” at ceremonies throughout the nation designed to ensure that this indelible stain on our democracy is never forgotten. It is ordinarily a solemn occasion and a day of reflection. But on this day, the 75th anniversary of Executive Order 9066, our current anti-Muslim crisis sounds a chilling echo of that earlier injustice, which must not be ignored. This year we are called to transform our quiet reflection into a fierce resistance.

No previous anniversary has been more important or more ominous. The 75th anniversary serves as a timely reminder of both the fragility of our democracy and the grave danger that we currently confront.

The Muslim community does not stand alone. Instead an inspiring nationwide protest movement has boldly stood up to confront Trump's policies.

When President Roosevelt issued this order in 1942, the resistance was meek and the protest was mute. Japanese Americans stood virtually alone as they were literally rounded up from their homes and businesses and imprisoned in concentration camps. Only a handful of organizations and individuals publicly opposed the order.  It was wartime, and few institutions were willing to risk being labeled “Un-American.”

Perhaps more importantly, anti-Japanese American sentiment assumed that the danger of disloyalty was inherent in the ancestry of these Americans because they “looked like the enemy.” In turn, this fear was whipped into a xenophobic fervor by government officials’ cynical use of “alternative facts,” which were later proven to be deliberate lies offered to justify these racist policies as a “wartime necessity.”

Seventy-five years later, we confront a president who is promulgating hateful anti-Muslim policies and similar propaganda about the dangers of disloyalty, linking that to the threat of terrorism, which is once again deeply rooted in racism and xenophobia. But there is a sharp difference in the current crisis — today’s resistance is far from meek. Rather it is intense and vigorous.

The Muslim community does not stand alone. Instead an inspiring nationwide protest movement has boldly stood up to confront Trump's policies. In fact, this protest, working in tandem with aggressive legal advocacy, has forced the president to back down in the face of judicial decisions challenging the constitutionality of his Muslim ban.

After three weeks of protest and legal action, he has been forced to return to the drawing board. This is unlikely to be the end of this misguided policy, but simply a pause. But our success so far has meant tens of thousands of visa holders — people the administration was determined to ban from this country because of their faith and national origin — are now able to travel to the United States. The resistance mounted against this anti-Muslim policy has, at the very least, significantly slowed the inhumane machinery that the president once thought was unstoppable.

Several years ago, I had the great privilege of standing with Fred Korematsu and his family on the Day of Remembrance to light candles and to speak about the fight for justice. It is a memory I treasure today. Fred Korematsu was the courageous American who defied this unjust order and was arrested and jailed.

I have no doubt that if Fred Korematsu were still alive during this current crisis he would once again be standing with us — by our side in court, at the airport in protest, or marching to protect the rights of immigrants. Fred Korematsu with the ACLU of Northern California, ultimately took his own case challenging the incarceration order to the U.S. Supreme Court, teaching us that resistance and protest along with litigation can, over time, change the course of history. Now a new and growing movement of activists and lawyers is taking up this challenge with effective new tools and remarkable passion.

But there remain extraordinary dangers ahead.

This administration is promulgating or threatening many proposals cut from the same cloth as Executive Order 9066. This coming week, the administration has said it will release its successor executive order designed to reactivate the Muslim ban, perhaps using more palatable language. The Trump administration is also conducting aggressive immigration raids across the country that seem to be a harbinger of even more draconian actions to come. On Saturday, draft homeland security memos signed by Gen. Kelly and obtained by McClatchy show an administration intent on ignoring due process, deputizing state and law authorities, and setting up an enormous dragnet to carry out mass deportations of undocumented immigrants, including children.

The ACLU, in alliance with many other organizations, stands ready to challenge these actions. Our commitment to do so truly honors and respects those Americans whom we remember on this solemn day.