With No Evidence of Wrongdoing, NYPD Treats Entire Mosques as Terrorist Groups

The Associated Press reported today that the NYPD designated entire mosques "terrorism enterprises" in order to justify the use of invasive methods to spy on congregants and imams. The report confirms what we have long been saying about the NYPD's Muslim surveillance program: Despite no suspicion of wrongdoing, and based on nothing more than their religious faith and practice, whole communities have been treated as terrorists and swept up in an unconstitutional police dragnet that reportedly has not generated even one terrorism lead.

This past June, the ACLU, along with the New York Civil Liberties Union and the CLEAR Project at CUNY Law School, filed a lawsuit against the NYPD, challenging the discriminatory and unconstitutional program. NYPD officers, along with a network of informants (and, apparently, the police department's very own spying taxi), have mapped and spied on institutions frequented by Muslim New Yorkers. Surveillance cameras have been installed outside mosques, monitoring the comings and goings of congregants; informants have infiltrated associations, places of worship, restaurants, bookstores, and more to monitor and take notes on innocent people and innocuous conversations. As the AP's Matt Apuzzo and Adam Goldman write in their upcoming book "Enemies Within: Inside the NYPD's Secret Spying Unit and bin Laden's Final Plot Against America," excerpted this week in New York Magazine:

The activities [NYPD Commissioner] Kelly set in motion after 9/11 pushed deeply into the private lives of New Yorkers, surveilling Muslims in their mosques, their sporting fields, their businesses, their social clubs, even their homes in a way not seen in America since the FBI and CIA monitored antiwar activists during the Nixon administration.

Read more about our suit against the NYPD's Muslim surveillance program>>

Through "terrorism enterprise investigations" (TEIs), the police sought to skirt restrictions on the investigation of First Amendment-protected activities. The report makes it clear that the designation was used against mosques without any evidence of criminality, to justify the surveillance of as many ordinary people as possible.

In this AP video report about the latest developments, Linda Sarsour, the executive director of the Arab American Association of New York, speaks movingly about the impact on her and AANY of discovering that the NYPD sought to infiltrate the organization: 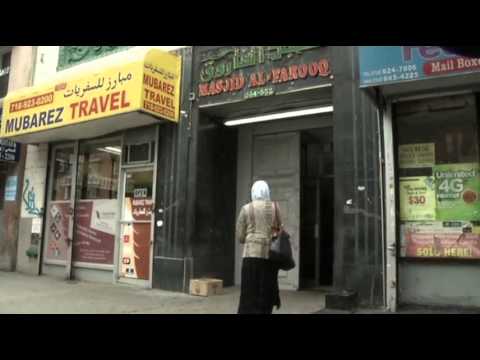 Our clients, some of whom are mentioned in the report as targets of these suspicionless TEIs, have experienced firsthand the stigma and chilling effects of police spying. One of them is a Brooklyn mosque called Masjid Al-Ansar. Upon learning it was under surveillance and had been infiltrated by informants, Masjid Al-Ansar invested in expensive video equipment to record sermons, in order to prevent NYPD officers or informants from misreporting statements or taking them out of context. For the same reason, the mosque leadership to this day discourages congregants from discussing topics that the NYPD could consider controversial, and limits their presence at the mosque outside of prayer times to avoid drawing unwarranted police surveillance of innocent worshippers. Our complaint describes how Hamid Hassan Raza, another client and the imam of Masjid Al-Ansar, has adjusted his religious ministry out of fear of surveillance, and how the place of worship went from being a vibrant institution of prayer, learning, and community, to one tainted by distrust and suspicion.

The report also describes the ongoing surveillance of another one of our clients, Mohammad Elshinawy. Mr. Elshinawy is a teacher of Islam who has lectured at various organizations, always on a volunteer basis, around New York. While the FBI closed an investigation into Mr. Elshinawy because it had no reason to charge him with criminal wrongdoing, the NYPD "deemed him a threat in part because ‘he is so highly regarded by so many young and impressionable individuals,'" according to an NYPD surveillance document quoted by the AP. The NYPD went so far as to spy on Mr. Elshinawy at his wedding, with an informant recording everyone in attendance.

As the ACLU's Hina Shamsi told the AP:

These new NYPD spying disclosures confirm the experiences and worst fears of New York's Muslims. From houses of worship to a wedding, there's no area of New York Muslim religious or personal life that the NYPD has not invaded through its bias-based surveillance policy.

Can you imagine your routine coffee-shop conversations – or your wedding – being monitored by police informants? Hundreds of thousands of innocent Muslim New Yorkers can. They deserve a police force they can rely on to protect them – not one that treats them as suspect for no reason but their religion.