President Obama Should Listen to the American People – Not His Advisors – on the NDAA.

Last night, the House of Representatives voted to pass the 2012 National Defense Authorization Act (NDAA), a bill that contains harmful provisions that some legislators have said could authorize the U.S. military to pick up and imprison without charge or trial civilians, including American citizens, anywhere in the world.

The final version of the NDAA was agreed to earlier this week by House and Senate conferees, and the Senate is expected to pass the bill later this afternoon. (You can tune in on C-Span.)

Although the Obama administration had twice threatened to veto a previous version of the bill based on these provisions, it reversed its position yesterday. Jameel Jaffer, the ACLU’s Deputy Legal Director appeared on the Rachel Maddow Show, last night to discuss our objections to the bill. 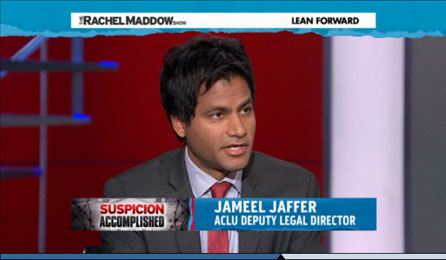 Needless to say, we’re deeply disappointed that the President’s advisors have recommended that he not veto the bill. In a statement released yesterday, Laura W. Murphy, director of the ACLU Washington Legislative Office stated, “The president should more carefully consider the consequences of allowing this bill to become law. If President Obama signs this bill, it will damage both his legacy and American’s reputation for upholding the rule of law. The last time Congress passed indefinite detention legislation was during the McCarthy era and President Truman had the courage to veto that bill. We hope that the president will consider the long view of history before codifying indefinite detention without charge or trial.”

Our government must not enshrine permanently into law the power to militarily detain people indefinitely without charge or trial. Tell the president to listen to the American people and veto any bill that contains indefinite detention. If the president fails to veto the bill, ask him to publicly commit to limiting his use of this authority to actual battlefields only. The whole world is not a battlefield and the president should make that clear.