The ACLU joined privacy groups from across the political spectrum, including Freedom Works and Demand Progress, to deliver the public’s petitions for surveillance reform directly in the halls of Congress. We delivered over 100,000 petitions to members of the House of Representatives urging them to reform the government’s warrantless surveillance powers under Section 702 of the Foreign Intelligence Surveillance Act, which is set to expire at the end of this year.

Americans from all political parties and ideologies have lost faith in our intelligence agencies. Recent polling shows that nearly 80 percent of Americans think existing laws are not enough to ensure that the NSA and other government agencies respect Americans’ privacy. It is now up to Congress to reform our laws and help restore Americans’ trust.

Under Section 702, the government collects Americans’ international emails and phone calls without a warrant, copies and combs through virtually all international internet traffic, and asserts the right to use information collected in criminal prosecutions entirely unrelated to terrorism. 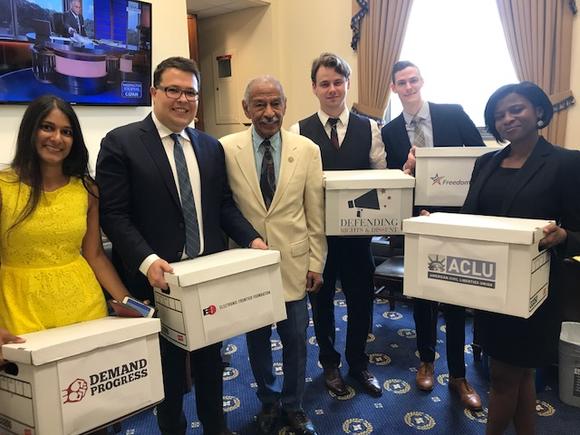 These practices go against our constitutional values and leave the door wide open to surveillance abuse targeted at religious minorities, critics of the government, or political groups.

Polling also shows that many of these practices are concerning to Democrats, Republicans, and independents. The same poll found that over 85 percent of people believe that companies should not share personal information, like emails, with law enforcement without a warrant. Over 70 percent believe that information gathered without a warrant for national security purposes should not be used for other purposes like prosecuting domestic crimes.

The time to act is now. Tell your member of Congress to support reform of Section 702.