In response to an ACLU Freedom of Information Act request, the Department of Homeland Security has at long last released its December 2011 Civil Rights/Civil Liberties Impact Assessment of its policy of conducting suspicionless searches of electronic devices at the border. Because of the sensitive, personal nature of the records we all carry with us on our laptops and phones, both the First and Fourth Amendments prohibit the government from searching these devices at the border, absent reasonable suspicion that a search will turn up evidence of wrongdoing.

Disappointingly, the DHS Civil Rights and Civil Liberties Office disagrees. While its constitutional analysis is largely redacted (it's unclear why), the report does explain why such a policy is, in the office's view, "inadvisable." This is striking because it is the first time, as far as we know, that the government has explained why purely suspicionless searches supposedly enhance security:

[A]dding a heightened [suspicion-based] threshold requirement could be operationally harmful without concomitant civil rights/civil liberties benefit. First, commonplace decisions to search electronic devices might be opened to litigation challenging the reasons for the search. In addition to interfering with a carefully constructed border security system, the litigation could directly undermine national security by requiring the government to produce sensitive investigative and national security information to justify some of the most critical searches. Even a policy change entirely unenforceable by courts might be problematic; we have been presented with some noteworthy CBP and ICE success stories based on hard-to-articulate intuitions or hunches based on officer experience and judgment. Under a reasonable suspicion requirement, officers might hesitate to search an individual's device without the presence of articulable factors capable of being formally defended, despite having an intuition or hunch based on experience that justified a search.

This line of thought is faulty for a few reasons. DHS claims that giving Americans the opportunity to challenge laptop searches in court would lead to the divulgence of national security secrets, but this is obviously wrong. The government has numerous resources at its disposal to prevent the disclosure of sensitive information. The "state secrets privilege," to take just one example that is used in court cases, has been criticized on many grounds, but no one has ever seriously suggested that its protections are too anemic. Although DHS might fear the prospect of being called into open court to explain its actions, executive accountability before the law is the bedrock on which our system of constitutional self-government is built. 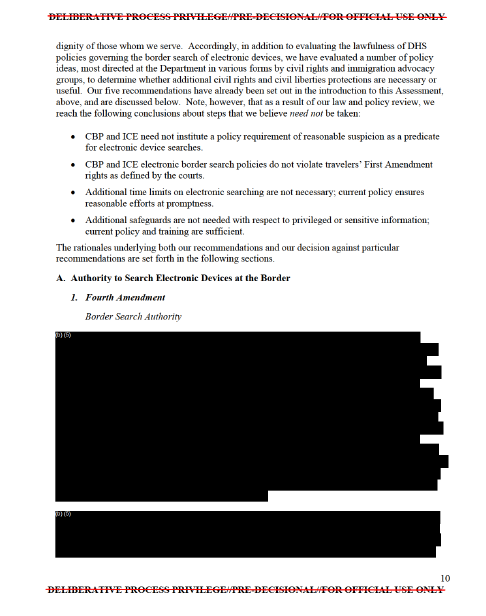 Even more problematic is the government's claim that the "hard-to-articulate" hunch of a border agent is enough for the government to scrounge around through our personal photos, medical and financial records, email, and whatever other sensitive information may be stored on our laptops and phones. While the report cites unspecified anecdotal evidence that wrongdoers are sometimes apprehended based on "intuitions," it says nothing about the number of innocent people who are subjected to unjustified searches as a result. As the Supreme Court explained in Terry v. Ohio, if law enforcement agents are allowed to intrude upon people's rights "based on nothing more substantial than inarticulate hunches," then "the protections of the Fourth Amendment would evaporate, and the people would be ‘secure in their persons, houses, papers and effects,' only in the discretion of the [government]."

To be sure, rummaging around through people's personal papers may well turn up the occasional bad guy, but that is not the only consideration. No doubt law enforcement agents would also find it useful to walk into people's homes at will, but we don't allow them to do so because that would intrude on our reasonable expectation of privacy in our homes. And just as we reasonably expect privacy in our homes, so, too, do we expect that border agents will not base their decisions to search through our electronic information on a whim or a hunch. Put another way, requiring law enforcement agents to possess objective reasons for a search is a feature of our constitutional framework, not a bug.

Even at the border, the Fourth Amendment requires more than just hunches. It is disappointing that the DHS watchdog dedicated to protecting our privacy and other civil liberties does not recognize that.