On a May morning in 2015, Xiaoxing Xi, a physics professor at Temple University, woke up to violent banging on the door of his home in a quiet suburb of Philadelphia.

He raced downstairs. When he opened the door, he was greeted by a group of armed federal agents. Within minutes, he was handcuffed and under arrest, and his wife and daughters, in their pajamas, were held at gunpoint with their hands up. In the subsequent hours, he was strip-searched, interrogated, and charged before being released on bail. “From the very beginning, I was telling myself,” he said, “do everything they ask me to do so that they don’t shoot me.”

Professor Xi had no idea what the agents wanted with him, until they told him during questioning that he was suspected of spying for China. It became clear over the course of the interrogation that they had been closely monitoring his communications. “He seemed to be familiar with many, many of my emails,” Professor Xi said of the interrogator. 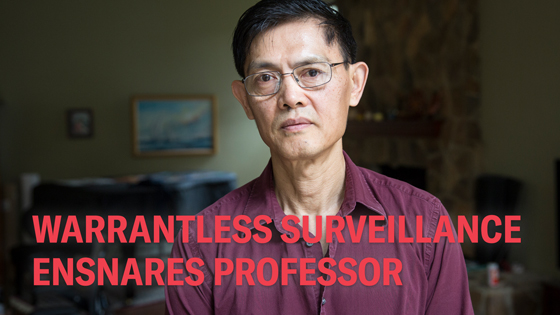 The FBI accused Professor Xi, an American citizen, of sharing information about a device called a pocket heater in violation of a non-disclosure agreement. But he had never shared that information. The emails in question concerned an entirely different technology, discussed over the course of routine — and perfectly legitimate — academic cooperation.

The charges were dropped against the professor four months later. In that time, he lost his chairmanship of the Physics Department at Temple University. He was temporarily suspended from his job, banned from campus, and forbidden from speaking with his students. He could not leave the Philadelphia area without permission. His family suffered trauma, symptoms of which persist to this day.

“I think my wife probably slept one or two hours a night. Myself, too. I couldn’t sleep during the night. So, you know, we just established new routines,” he said. “We might have two or three naps during the day when we really felt exhausted.”

The American justice system typically forbids law enforcement officials from spying on citizens without a probable cause warrant issued by a judge. However, the government claims a carve-out to that constitutional principle. Two provisions — called Section 702 of the Foreign Intelligence Surveillance Act and Executive Order 12333 — allow for the dragnet collection of electronic communications. While both technically prohibit targeting American citizens and residents, each captures vast quantities of Americans’ international — and even some domestic — communications. In addition, the FBI and other agencies are allowed to sift through the data collected under Section 702 for information about anyone, without judicial oversight. In other words, the FBI has a treasure trove of information it can use to prosecute citizens, even if it has never made a case before a judge.

We’ve seen the destructive effects of unwarranted government scrutiny on the lives of people who have done nothing wrong, and minorities and activists have historically borne the brunt of these practices. Professor Xi’s case is not an aberration. As we explain in the lawsuit the ACLU joined on his behalf, a number of Chinese-American scientists have been indicted for spying for China, only to have their cases dismissed before trial. The investigation of Professor Xi appears to have been based his Chinese ethnicity. In the words of Rep. Judy Chu (D-Calif.), who has called for accountability for these wrongful indictments, “Are all Chinese-American scientists suspects because they are Chinese-American?"

Warrantless surveillance can shatter reputations and ruin lives — for nothing. Section 702 is set to expire at the end of the year. Congress is considering various proposals to extend the law, and in some cases even to expand it. Instead, it should reform Section 702 to end these egregious violations of basic principles of justice.