Yesterday, we posted a troubling explanation from the FBI of why it doesn’t want you to know whether your phone and internet providers are cooperating in the most expansive surveillance program that Congress has ever enacted: You might sue.

But here’s another surprisingly forthcoming passage from the FBI’s declaration, perhaps more revealing than the one we posted yesterday. On page 42 of its declaration: 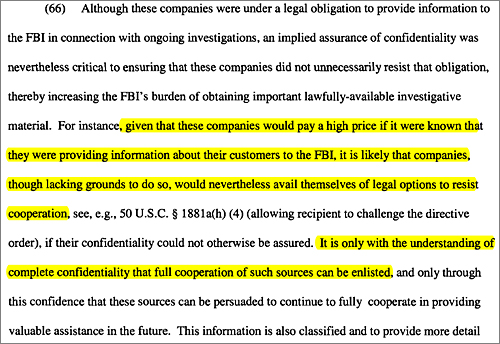 In other words, the FBI’s concern isn’t just that you might sue, but that the companies might sue! Why? Because their comfortable relationship with the government’s surveillance apparatus would be exposed.

Don’t get me wrong. Surveillance is an important part of our government’s intelligence operations. But it is an awesome power that should be used in accordance with the law and our values. And when the government is depending on blanket secrecy to insulate its activities not just from public scrutiny but from legal challenge, something is deeply wrong.