Howlers on the Patriot Act

The Patriot Act has been surrounded by a cloud of fear-mongering since it was reintroduced almost immediately after the 9/11 attacks and rushed through Congress, without any finding that the sweeping new powers granted by the act had anything to do with the problems and failures that contributed to that attack.

At the heart of the issue has been confusion between giving the authorities surveillance powers, and giving them unchecked surveillance powers. Much of what the Patriot Act did was to remove independent judges from oversight over invasions of privacy conducted in the name of law enforcement and national security.

Two Bush administration officials, former National Security Administration (NSA) director and former CIA director Michael V. Hayden and former Attorney General Michael B. Mukasey, continued that tradition of inaccuracy and fear-mongering in an op-ed published last week in the Washington Post. In their piece, they target a modest piece of legislation proposed by Sen. Patrick Leahy (D-Vt.) that would insert some much-needed oversight mechanisms into the Patriot Act. Hayden and Mukasey warn that the legislation "threatens key anti-terrorism tools." But, acting fully in the tradition of government rhetoric around the power-grab Patriot Act, Hayden and Mukasey's piece is rife with errors, distortions and inaccuracies:

Hayden and Mukasey also include two howlers that are not directly related to the Patriot Act:

The inaccuracies in the Hayden-Mukasey piece did not escape the attention of Sen. Leahy, who was moved to write a letter to the Washington Post with Sen. Dianne Feinstein (D-Calif.).

We certainly applaud Sen. Leahy for trying to put some modest but important oversight and accountability mechanisms into the Patriot Act, a law that runs counter to long-established Anglo-American traditions of privacy and due process. But this bill certainly doesn't go as far as is needed, and is unlikely to reduce the number of people caught in government spying programs. To say that the bill will hamper intelligence activities at all is laughably unfounded.

The Hayden-Mukasey piece continues the Bush administration's tradition of distorting the truth and fear-mongering. It's time we cleared the air. 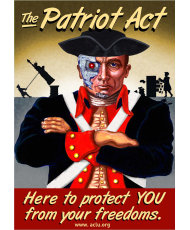 Cowards, Liars, and Criminals,they wouldn't speak the truth if truth sat in there lap and slapped them in the face! Sieg Heil.