The current debate about government surveillance has largely overlooked the CIA, possibly because we know little about the agency's activities within the United States. While the relevant legal authorities governing the CIA, including Executive Order 12333, set out the CIA's mandate, they do so in broad terms. Beyond the generalities in EO 12333 and other laws, the public has had few opportunities to examine the rules governing the CIA's activities.

The Most Important Surveillance Order We Know Almost Nothing About.

But we know more today than we did a few weeks ago. In response to a Freedom of Information Act lawsuit filed by the ACLU and Yale Law School's Media Freedom and Information Access Clinic, the CIA has released a slew of documents concerning CIA surveillance under EO 12333. (The Justice Department has also recently released a set of documents related to the executive order.)

The national debate in the 1970s about the proper limits of U.S. government spying on its own citizens was, to a large extent, about the CIA. In the wake of the Watergate scandal and news stories about other illegal CIA activity, President Gerald Ford and Congress launched investigations into the full range of CIA misdeeds — from domestic spying programs and infiltration of leftist organizations to experimentation on non-consenting human subjects and attempts to assassinate foreign leaders.

Although the CIA's legal authority to spy on Americans was very narrow, these investigative committees — chaired by Sen. Frank Church, Vice President Nelson Rockefeller, and Rep. Otis Pike — discovered that the CIA had engaged in a massive domestic spying project, "Operation CHAOS," which targeted anti-war activists and political dissenters. The committee reports also revealed that, for more than 20 years, the CIA had indiscriminately intercepted and opened hundreds of thousands of Americans' letters. In addition to documenting the intelligence agencies' extensive violations of the law, the Church Committee concluded that the constitutional system of checks and balances "has not adequately controlled intelligence activities."

The Church Committee's conclusion — at core, an admonition — still resonates today. While the documents that the CIA has released are heavily redacted, raising more questions than they answer, they strongly suggest that the agency's domestic activities are extensive.

Some highlights from the documents:

AR 2-2, which has never been publicly released before, includes rules governing a wide range of activities, including surveillance of U.S. persons, human experimentation, contracts with academic institutions, relations with journalists and staff of U.S. news media, and relations with clergy and missionaries.

Several annexes to AR 2-2 contain the agency's EO 12333 implementing procedures. For example, Annex A, "Guidance for CIA Activities Outside the United States," sets forth the procedures that apply to CIA activity directed toward U.S. citizens and permanent residents who are abroad. Much of the relevant information is redacted. Annex F, "Procedures Governing Conduct and Coordination by CIA and DEA of Narcotics Activities Abroad," is similarly redacted in key sections, including the section discussing the agencies' "Specific Agreement Concerning Electronic Surveillance."

Domestically, the CIA's spying is governed by Annex B to AR 2-2, "Guidance for CIA Activities Within the United States." This document explains:

Although EO 12333, AR 2-2, and Annex B prohibit the agency from engaging in electronic surveillance within the United States, the CIA can nevertheless ask the FBI to do its bidding: 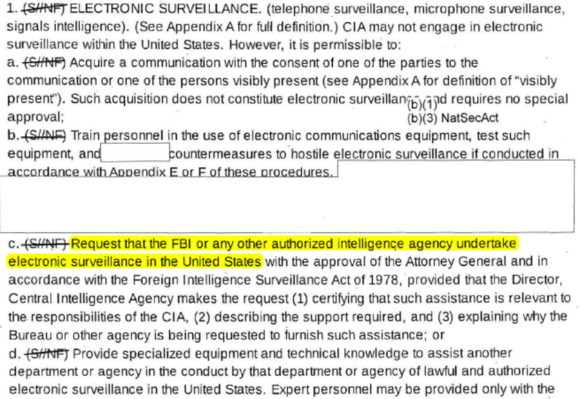 Annex B and the CIA-FBI memorandum of understanding comport with past reporting that the Foreign Intelligence Surveillance Court authorized the FBI to work with the CIA to collect Americans' financial records in bulk under Patriot Act Section 215.

In addition, Annex B explains that the CIA may "use a monitoring device within the United States under circumstances in which a warrant would not be required for law enforcement purposes if the CIA General Counsel concurs."

The CIA also turned over several years' worth of annual reports to Congress about the agency's activities under EO 12333. These reports begin by discussing "Intelligence Activities Conducted by CIA Within the United States." This header is followed by dozens of entirely redacted pages — once again suggesting that the agency is engaged in a significant amount of intelligence activity here at home. ​

A 2002 report by the CIA inspector general, "Intelligence Activity Assessment: Compliance with Executive Order 12333: The Use of [redacted] Collection [redacted] from 1995–2000," observed "a general and widespread lack of understanding" within the CIA of the rules governing the retention and sharing of U.S. citizens' and permanent residents' information. In particular, the OIG found that few managers or other officers "could accurately state the appropriate procedures for retaining or disseminating U.S. person information," and it concluded that these rules were "not being applied consistently" by the agency.

The independent and bi-partisan Privacy and Civil Liberties Oversight Board is currently examining the intelligence community's counterterrorism-related activities under EO 12333. Notably, one of the topics the board plans to focus on is the CIA's collection of information within the United States. We hope that, when the board eventually issues its public report about the agencies' activities under EO 12333, it sheds a little more light on what exactly the CIA is doing here at home.

I Refused to Become an FBI Informant, and the Government Put Me on the No Fly...

CBP’s Plan to Expand Face Surveillance at Airports is a Civil Liberties...