Automatic license plate readers are the most widespread location tracking technology you’ve probably never heard of. Mounted on patrol cars or stationary objects like bridges, they snap photos of every passing car, recording their plate numbers, times, and locations. At first the captured plate data was used just to check against lists of cars law enforcement hoped to locate for various reasons (to act on arrest warrants, find stolen cars, etc.). But increasingly, all of this data is being fed into massive databases that contain the location information of many millions of innocent Americans stretching back for months or even years.

This is what we have found after analyzing more than 26,000 pages of documents from police departments in cities and towns across the country, obtained through freedom of information requests by ACLU affiliates in 38 states and Washington, D.C. As it becomes increasingly clear that ours is an era of mass surveillance facilitated by ever cheaper and more powerful computing technology (think about the NSA's call logging program), it is critical we learn how this technology is being used. License plate readers are just one example of a disturbing phenomenon: the government is increasingly using new technology to collect information about all of us, all the time, and to store it forever – providing a complete record of our lives for it to access at will.

Today, we are releasing all of the documents we have received (accessible through this interactive map and this issue page) and are publishing a report, “You Are Being Tracked,” which explains what these documents say about license plate readers: what they are capable of, how they are being used, and what privacy harms they can cause if protections aren’t put in place. We’re also offering more than a dozen recommendations we think local police departments and state legislatures should follow when they pass laws about this technology.

Check out this great explainer about the technology: 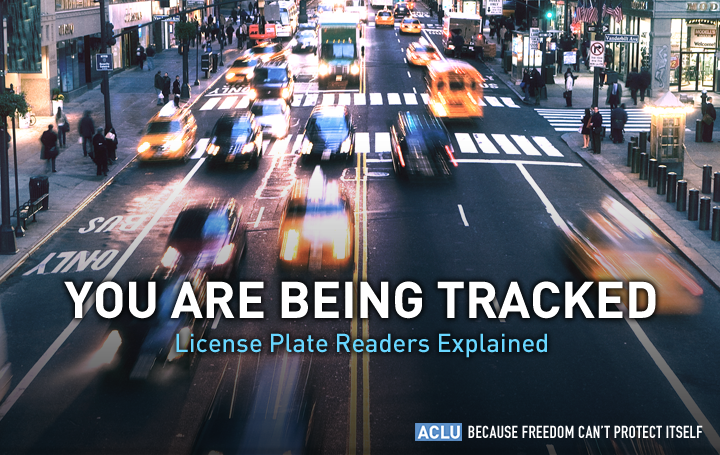 As is often the case with surveillance technology, there are unobjectionable – even beneficial – uses of license plate readers. We don’t object when they’re used to identify people who are driving stolen cars or are subject to an arrest warrant. But they should not become tools for tracking where each of us has driven.

Because of the way the technology works – these devices snap photos of every passing car, not just those registered to people suspected of crimes – virtually all of the data license plate readers gather is about people who are completely innocent. Data that we obtained through our records requests illustrates this point vividly:

Why we should worry

Should the government be logging for months, years, or indefinitely the movements of the other 99 percent of people, who are innocent?

The answer to this question is no. License plate reader information can be very revealing. While one snapshot at one point might not seem sensitive, as blankets of plate readers cover our streets, and as the government stores data for longer and longer, the technology quickly morphs into a powerful tracking tool.

As computer technology and storage capacity get cheaper every year, we need to prepare for a future not just where there are a few license plate reader cameras in every town, but one in which there are multiple cameras on every block.

What can location data reveal about people? Trips to places of worship, political protests, or gun ranges can be powerful indicators of people’s beliefs. Is it really the government’s business how often you go to the drug store or liquor store, what doctors you visit, and the identities of your friends? I’m sure all of us can remember something from our past that could embarrass us. If the government comes to suspect you of something in 2020, should it have access to databases stretching back years that could dig up facts about you that previously went unnoticed?

Law enforcement data-retention policies today are all over the map. While some police departments store data briefly, others keep it for a long time, or indefinitely. 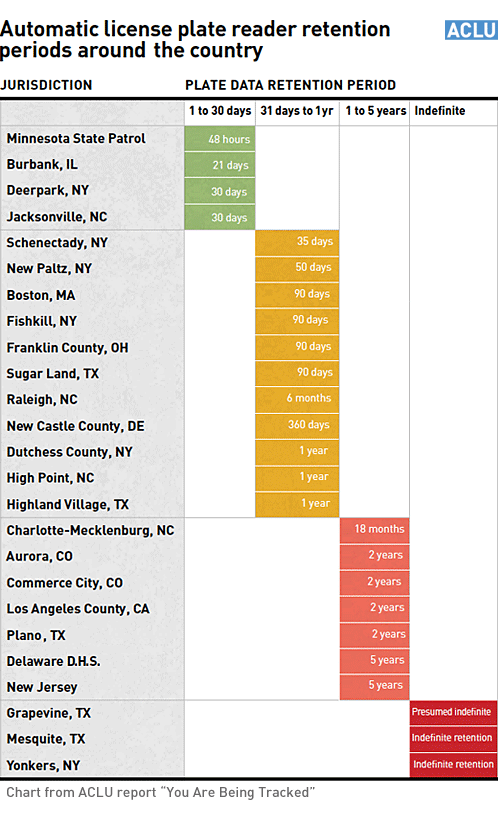 The government doesn’t have a great track record of using this kind of information responsibly. As our report details, the data can be abused for official purposes, like spying on protesters merely because they are exercising their constitutionally protected right to petition the government, or unofficial ones, like tracking an ex-spouse.

Prior to the rise of powerful surveillance technology, it simply wasn’t possible to watch all of the people all of the time. But as these natural limits erode and the impossible becomes possible, we have to make conscious choices about how technology should be used.

There is a reasonable way to regulate this technology. The primary law enforcement use of these systems is to take pictures of plates to make it possible to check them against “hot lists” of cars of interest to law enforcement. This can be done virtually instantaneously. While plates that generate a “hit” may need to be stored for investigative purposes, there is no need to store plates for months or years to achieve this purpose.

That is to say, the answer to regulating license plate readers is to have strict limits on how long plate data can be retained. While we don’t recommend a specific cutoff date, we think it should be measured in days and weeks, not months and certainly not years.

To their credit, some law enforcement agencies already comply with this principle. For example, the Minnesota State Patrol deletes all data after 48 hours.

Others keep data for longer, and the rationale given is always the same: Although you can’t tell immediately that someone is committing a crime, some of those people may well be doing something wrong, goes the argument. But in our society, the government doesn’t watch all of us all the time just in case we commit a crime.

This is not just an issue we’ll have to decide in the context of license plate readers, but the most important surveillance issue of our time. Should the NSA collect all data about everyone’s calls, just in case it’s useful to identify a terrorist? Why stop there? Why not store all of the contents of the calls we make as well? And emails? This is not just about communications or public movements. It’s also about what happens inside the home. As electric companies convert to “smart grids” that provide them data about the patterns of your electricity usage, it could well become apparent when you take a shower and whether you run your dishwasher more frequently than others in your demographic profile.

License plate readers are just one manifestation of trend. Is this a test case that we can get right?

There is a lot more in the report than I’ve covered in this blog post. Give it a read – I hope you find it thought-provoking. We’ll be posting more blog posts in coming days on different aspects of what we’ve learned about license plate readers. We also invite you to go through the documents yourself. There is more in there than we with our small staff could fully examine, so further newsworthy discoveries may still lurk within, waiting to be discovered. And join us on twitter (hashtag #autotracking) to discuss your finds.