In a post yesterday I discussed the belief that as long as our behavior and communications are only scrutinized by a computer, our privacy has not been invaded. Many people have that sense because computers are so much dumber than human beings.

But intelligence is not the crucial factor when we decide whether we feel our privacy has been invaded by an act of eavesdropping. There is another factor, tightly related to—but ultimately separate from—intelligence, that is the true measure of when we should, and do, care about privacy.

Jeffrey Rosen relates a story from Milan Kundera about how the Czech police destroyed an important leader of the Prague Spring uprisings simply by recording his conversations with a friend and then broadcasting them on the radio. Kundera pointed out that this worked because “in private, a person says all sorts of things, slurs friends, uses coarse language. . . makes a companion laugh by shocking him with outrageous talk, floats heretical ideas he'd never admit in public and so forth.”

The importance of being able to control the reverberation of private conversations has long been implicitly recognized, for example through such institutions as the doctor-patient confidentiality, attorney-client privilege, and the special protections against testifying that are given to priests and spouses. And it is why the prospect of having something we say to one audience spill over into another audience raises a special kind of social terror in most people.

Is this kind of “reverb potential” or connectedness really separate from intelligence? Yes, because like people, computers can also be tied into networks—networks of other computers, and networks of people. E-mail monitoring software, for example, could be programmed to sound an alarm for an intelligence analyst based on something it finds in one’s e-mail. Or—to remove the human being from the equation altogether—it could be programmed to alert other computers in a network, which then make future judgments of the individual based upon that alert. Being watched by a computer can be the equivalent of being monitored by a particularly dogmatic, knee-jerk and thuggish informant—but evaluations made by even a really dumb mind can reverberate significantly.

Many people have a very strong intuition that there is something different about sentience. But this is an illusion. It is just that we are accustomed to situations where sane people do not worry about discussing their love lives in front of their refrigerators or laptops, while encounters with sentient minds can bring dangerous consequences if not handled much more carefully. But at root, it is consequences that we fear, not some abstract sense of moral scrutiny by Sentience. Embarrassment is nothing more than a form of fear.

To see how that is so, think about situations when there is no reverb potential—contexts where we encounter people without fear of consequences. At one extreme, we don’t worry about what we say in front of people who don’t speak our language. We worry less about being candid in front of people over whom we have a lot of power, or people who don’t understand a context (such as children) or are removed from it (talking about one’s office politics with relatives, or vice-versa). And then there is the well-known phenomenon of sharing confidences with a stranger—the fact that we sometimes share things when stuck on an elevator with a random person that we would never tell people who are actually part of our lives. That happens precisely because we will never see the person again, and so our disclosures will have no consequences for us.

Then there are cities. There is a reason that we see a distinct set of behaviors in urban settings, where we are not closely connected to most of those around us. In a city, we are routinely surrounded by people we will never see again and can say anything we like (provided that it is not grossly illegal or outrageous enough to attract media attention) and our behavior will have zero reverberation in our lives. That is why cities strike people as less friendly places—and why it was funny in the movie “Crocodile Dundee” to see the title character, who hailed from rural Australia, walking down a Manhattan street greeting every person he passed. We know implicitly that he might as well not bother, because his social courtesy is wasted effort; in the ocean of people who inhabit the city, it will never pay dividends the way it would in a small town. The lack of reverberation attached to one’s actions also explains the familiar phenomenon of the “private bubble in public”—those who gab about intimate topics on their cell phones in crowded places without the least self-consciousness, as if they are in a soundproof telephone booth. Those are people who have fully internalized the probability that their words and actions in “public” will not reverberate in their lives.

In a small community where you deal with the same people over and over, social courtesies are an investment in future reputation, while in a city everything is a one-shot deal.

By that line of thinking, if you live in a city long enough, you should eventually become shameless. Some do. But why are many of us still so susceptible to embarrassment in public places? One reason is that there remains a remote chance in even the most anonymous urban setting that our actions will rebound against us. Perhaps the ultimate example of that is the Korean “Dog Poop Girl.”

The point is that there is nothing special about people, and nothing special about intelligence. The reason we do not like to be subjected to eavesdropping and the monitoring of our private lives is that we do not want to live in constant fear that anything we say or do will have bad consequences for us somehow. It’s the consequences that we fear—it’s just that we are used to people being the primary source of those consequences. As computers are increasingly set up in ways that give them the potential to bring down bad consequences on our heads, we will learn to fear them just as much as we fear other kinds of monitoring. Computers can be plugged in, too—and humans can be disconnected.

From the point of view of protecting privacy, the best relationships are those with intelligent minds that are cut off from reverberation—for example, confidences shared with a trusted friend or with a priest, doctor, or other professional bound by a code of confidentiality. On the other hand, the worst combination is dumbness that reverberates. Most of us have had repeated dealings with dumb functionaries and bureaucracies that lack any trace of human empathy and common sense and yet whose decisions can reverberate very strongly throughout our lives. 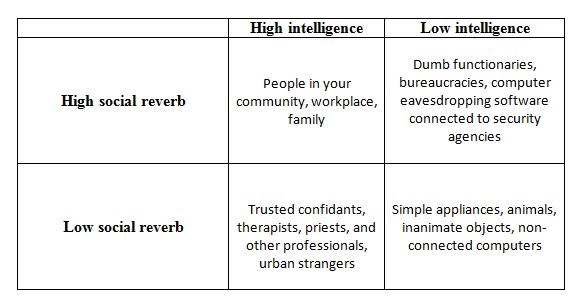 As this chart indicates, the common variable for what we fear when it comes to privacy invasions is high social reverb, not high intelligence.

There is nothing magic about people, and that will become increasingly apparent as computers get smarter, and as the consequences of computerized monitoring slowly sink in. We will increasingly come to fear certain computers as we internalize the new reality that just because an agent is dumb does not make it any less dangerous and indeed can make it more so. And the chilling effects from computer surveillance will, over time, become just as significant as those from humans.

Honestly, all of that over dog poop? You know it shows a very low level of intelligence of those that would carry the act too far. And when people commit acts against others that cause great harm they should be held responsible for it.
There is such a thing as defamation of character.

Omg I love Brian so much I am crazy about him I swear I cry everyday beuasce I want to see him so badly:) I know its stupid but I love all you guys and wish you the best on all your music but I can't help but think about Brian all day!!!! Love You so much Brian!!! I love you Brian!!! Love you again!!!!