In Time for the Reform Debate, New Documents Shed Light on the Government’s Surveillance of Americans

The ACLU today released more than a dozen new documents concerning the government’s warrantless surveillance of millions of Americans. They were obtained from several intelligence agencies in an ongoing Freedom of Information Act lawsuit and relate to Section 702 of the Foreign Intelligence Surveillance Act, the law that the government relies on to conduct its PRISM and Upstream spying programs.

Section 702 is a deeply controversial law that recently made headlines around the world again thanks to President Trump’s wiretapping claims. Under Section 702, the government examines the contents of Americans’ international emails, web-browsing activities, internet chats, and phone calls — all without ever getting a warrant. The documents released today shed some light on two particularly problematic aspects of Section 702: the scope of “incidental” collection and what is known as the “backdoor search” loophole.

The new documents underscore many of our concerns with surveillance conducted under this law, which violates our core constitutional rights to privacy, freedom of expression, and freedom of association. Section 702 is set to expire at the end of this year, and Congress has the opportunity to rein in warrantless spying by enacting significant reforms to the law.

One of the documents released by the Justice Department is an amicus brief filed with the secret Foreign Intelligence Surveillance Court. While the court typically hears only from the government, surveillance reforms in 2015 gave the FISC the discretion to appoint independent, security-cleared experts to file amicus briefs in proceedings concerning novel or important legal issues. The amicus brief, filed by former government prosecutor Amy Jeffress, highlights two critical points that bear on the “incidental” collection of Americans’ communications under Section 702.

First, despite what the government often implies, the brief explains that “not all Section 702 targets are international terrorists.”

To the contrary, Section 702 allows the government to “target” any foreigner located abroad for the purpose of gathering foreign intelligence information. And the government uses that authority to target more than 90,000 different individuals and groups. Those targets need not have any connection to terrorism or criminal activity — under the law, targets could include journalists, human rights workers, and virtually anyone else discussing foreign affairs.

Second, although the government is not permitted to target Americans under Section 702, it nonetheless sweeps up large amounts of Americans’ communications with and about these tens of thousands of targets. As the filing emphasizes:

This collection of Americans’ communications is often called “incidental” because it occurs in the course of surveillance directed at foreign targets. But the “incidental” label is something of a misnomer, because incidental collection is in no way accidental or inadvertent. The government knows in advance that it will acquire Americans’ information in the course of its warrantless surveillance. In fact, intelligence officials advocating for the passage of Section 702 made clear that this was one of the principal purposes of the law.

If the government seeks to spy on Americans’ private phone calls or emails, the Fourth Amendment generally requires it to first obtain a warrant. But under Section 702, the government — without any kind of warrant — collects and stores hundreds of millions of communications in NSA, CIA, and FBI databases each year, on the theory that its spying is directed at foreigners. After these communications are collected, agency analysts compound the constitutional problem by relying on what’s known as the “backdoor search” loophole: They search through their databases using Americans’ names and other identifying information, in order to locate Americans’ private, constitutionally protected communications.

The FBI’s backdoor searches are particularly troubling, as the agency routinely conducts these searches in ordinary criminal investigations that are unrelated to national security. The Jeffress amicus brief highlights some of these concerns:

In October 2015, Jeffress made her case in an oral argument before the Foreign Intelligence Surveillance Court, which ultimately rejected her contention that the FBI’s backdoor searches are unlawful. In a newly released transcript of those proceedings, the government defends its practice on somewhat paradoxical grounds, claiming that Section 702 backdoor searches in ordinary criminal investigations are essential to protect national security: 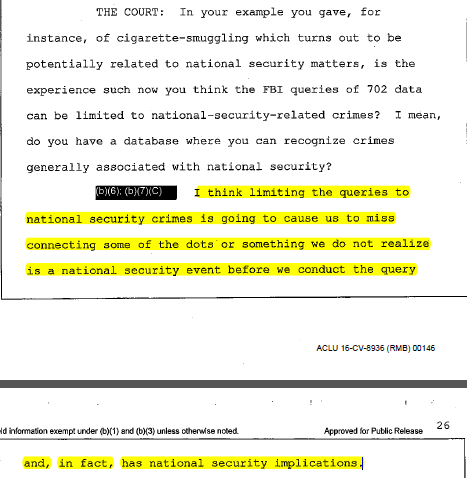 Yet the government also claims that these searches don’t raise real privacy problems because they rarely turn up information, useful or otherwise — leaving one to wonder why it insists on subjecting Americans to these warrantless searches at all: 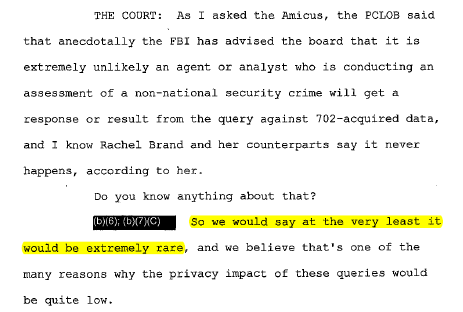 Finally, during the oral argument before the Foreign Intelligence Surveillance Court, Jeffress concluded her remarks with a powerful observation about the FBI’s powers: 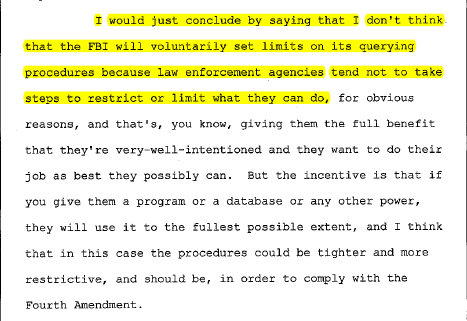 Indeed, when it comes to our rights to privacy and free expression, we shouldn’t count on the executive branch to restrain itself. That’s why Congress, the courts, and democratic oversight are essential. As the Section 702 reauthorization debate continues, Congress must take this opportunity to ensure that government surveillance practices comply with the Constitution.