In a landmark victory for privacy, a federal appeals court ruled unanimously today that the mass phone-records program exposed two years ago by NSA whistleblower Edward Snowden is illegal because it goes far beyond what Congress ever intended to permit when it passed Section 215 of the Patriot Act.

The ruling in ACLU v. Clapper is enormously significant, and not only because the program in question — the first to be revealed by Edward Snowden — is at the heart of a legislative reform effort playing out right now, or because it sparked the most significant debate about government surveillance in decades. The decision could also affect many other laws the government has stretched to the breaking point in order to justify dragnet collection of Americans’ sensitive information.

Under the program, revealed in the Guardian on June 5, 2013, telecommunications companies hand over to the NSA, on a daily basis, records relating to the calls of all of their customers. Those records include information about who called whom, when, and for how long. The ACLU sued the NSA over the program just days after it was revealed, and we took the case to the Second Circuit Court of Appeals after it was dismissed by a district court.

A few points on what makes the decision so important.

1. It recognizes that Section 215 of the Patriot Act does not authorize the government to collect information on such a massive scale. Section 215 allows the government to demand from third parties “any tangible thing” relevant to foreign intelligence or terrorism investigations. “Relevant” is a pretty abstract term, but the government employed a pretty fantastical interpretation to argue that every single call record in America is “relevant” because some of those records might come in handy in a future investigation. 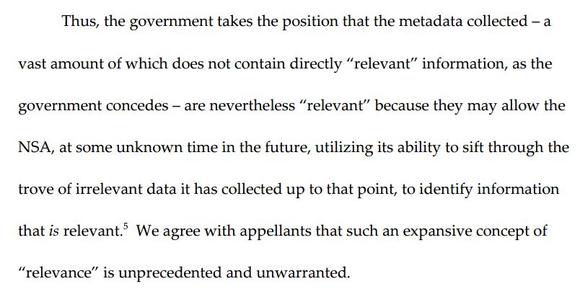 2. The decision’s significance extends far beyond the phone records program alone. It implicates other mass spying programs that we have learned about in the past two years and — almost certainly ­— others that the government continues to conceal from the public. For example, we know that the Drug Enforcement Administration, for decades, employed a similar definition of “relevance” to amass logs of every call made from the United States to as many as 116 different countries. The same theory was also used to justify the collection of email metadata. Both those programs have been discontinued, but the legal reasoning hasn’t, and it could very well be the basis for programs the government has never acknowledged to the public, including the CIA’s bulk collection of Americans’ financial records. 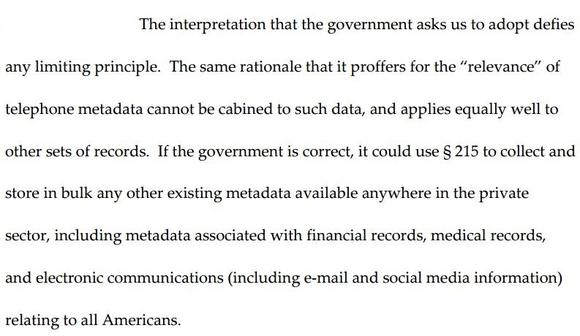 3. Metadata is incredibly sensitive and revealing. The government has long argued that the phone records program doesn’t reveal the contents of calls, and as such, it is not an invasion of privacy. But metadata, especially in aggregate, can be just as revealing as content, painting a detailed picture of a person’s life.  The decision reads: 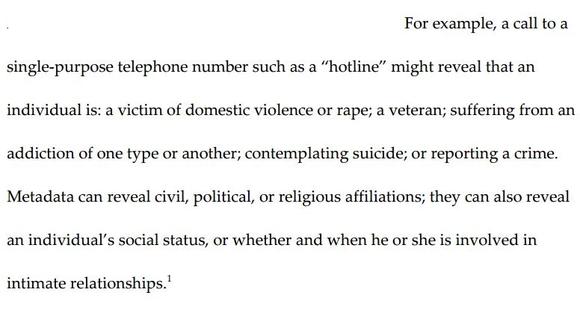 4. The importance of adversarial review. The court recognized that public, adversarial litigation concerning the lawfulness of this spying program was vitally important to its decision — and it drew a direct contrast to the secret, one-sided proceedings that occur in the Foreign Intelligence Surveillance Court.

The FISC operates in near-total secrecy, in which it almost always hears only from the government. It oversees a wide variety of broad surveillance programs without any public participation or input, approving a body of secret law that has no place in a democracy. This decision affirms the role that federal courts — and the public — have in overseeing practices with such sweeping constitutional implications.

5. The congressional reforms under consideration just don’t cut it. Ahead of Section 215’s sunset on June 1, Sen. Majority Leader Mitch McConnell (R-Ky.) is trying to push through a straight reauthorization of the provision, extending its life by another five years. After today’s decision came down, he took to the floor to defend the program — a position altogether at odds with the appeals court decision, with the conclusions of multiple executive-branch review groups who found the program hasn’t been effective in stopping terrorism, and with the clear consensus that supports far-reaching surveillance reform. Another bill in play (which the ACLU neither supports nor opposes), the USA Freedom Act of 2015, doesn’t go nearly far enough, most notably in ensuring that the government cannot engage in broad collection of innocent Americans’ private information.

We didn’t do this alone. Members of Congress — Rep. James Sensenbrenner (R-Wisc.) and Sen. Ron Wyden (D-Ore.) among them — have played an instrumental role in the fight for surveillance reform. Along with a number of organizations and experts, including the NRA, they filed amicus briefs on the ACLU’s behalf and championed the cause in Congress.

We hope that today’s ruling prompts Congress to consider and enact legislation that’s more robust than what’s currently on the table. Short of that, we continue to believe that Congress should seize the June 1 expiration date as an opportunity to let Section 215 die.