"Snowden's disclosures have improved the security of the Internet."

Watch the video recording (above) of Edward Snowden's conversation with the ACLU's Ben Wizner and Chris Soghoian at SXSW, and click "play" below to read the live blog. If you'd like to read a text version of the conversation, you can find it by clicking on the "transcript" icon on the YouTube video page. 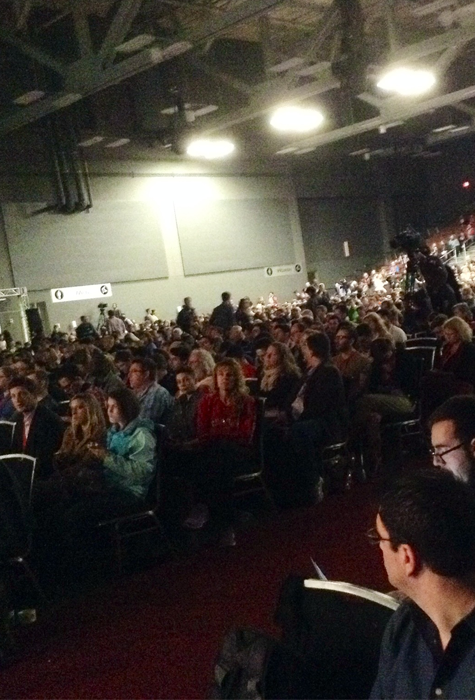 How appropriate. March 10 is the day Osama bin Laden was born. In the year 1957.

I hate what Edward Snowden said about the president. I never want to hear another word from him.
Just b/c a person's ALLOWED to give any opinion they like DOESN'T mean they have to start imparting to the world their wishes of specific people they'd like to see dead of gunfire.

That's MY opinion, and I've never said whom I want dead, not even with Osama bin Laden. I've said I don't care that he IS gone but I never said I hoped someone would do it - not to the entire world in a press interview.

He could do more for people than he knows if he wiped the annoying smirk off his face.

I am looking forward to hearing speak.. I hope to get some answers to many questions that I have about our leaders, and what is really going on with my rights as American....

I am looking forward to hearing him speak. Perhaps he can answer so many of my questions about my rights as an American, that have been taken away in the last 20 years...!!

I think I would like to hear Edward Snowden speak, before I cast any stones his way. Thus far he has brought a lot of things out in the open, but I am sure there is much more that needs to be talked about and just how far this has really gone. You know as well as I, that you won't hear the truth from our Leaders about this matter, so why not have a listen to what Edward Snowden has to say.? After all he hasn't told a lie about it as of yet, and I am sure there is so very much more that the American people need to hear... Our constitutional rights had been stepped on and wiped on the steps of the white house. We need to understand what we have lost as a free nation...!!!!!

Thank you Edward Snowden we need more intelligent people like you working in our gov to help preserve our freedoms or what is left of them.

Disk encryption, netork encryption... What about process encrcryption, such as encrypting data from the time it is read from disk to stored in memory, all the way to the point it reaches the media player?

Eddie talked mostly about surveillance of the Internet. If you are interested in other mass surveillance techniques that the government is using against you read section 3.5 of this academic paper
http://ssrn.com/abstract=2383166

Eddie your revelations do not cover even 1% of the current abuses of power, but you have inspired other whistle blowers. There is more shocking info on the way guys, so brace yourself.

The truth and/or reality is: encrypt everything, and use encryption all the time. 24/7 VPN and forceTLS are a great start.

Why? Because you deserve privacy and the only way to get it is to enforce it yourself and/or with the help of developers.