What Captain America Has to Say About the NSA

What is patriotism? Is it doing what the government says, or is it doing what you believe is true to the Constitution and American values? "Captain America: The Winter Soldier" – currently the No. 1 movie in the country – comes down on the latter side, wrapping its message in a red, white, and blue action-packed candy shell.

Unfrozen WWII super-soldier Steve Rogers – a.k.a. Captain America – works for SHIELD, which is basically the CIA plus Navy SEAL Team Six plus the NSA times a thousand. At first, the movie seems to be only a commentary on targeted killing. And it is that, featuring a set of enormous SHIELD military drones called "helicarriers," which prompt an exchange between Cap and SHIELD boss Nick Fury.

"We're gonna neutralize a lot of threats before they even happen."

"I thought the punishment usually came after the crime," Cap replies, recalling the Obama administration's elastic definition of the word "imminent" in its legal justification for putting people on the real-world kill list.

"SHIELD takes the world as it is, not as we'd like it to be," Fury says, echoing Dick Cheney's defense of over-the-line counterterrorism tactics.

"This isn't freedom – this is fear," Cap declares.

What later becomes apparent is that the movie is also about dragnet surveillance, revealed in the way that targets are selected for death under the secret helicarrier program, Project Insight. The methodology is explained in the confession of one of the bad guys:

"The 21st century is a digital book. … Your bank records, medical histories, voting patterns, emails, phone calls, your damn SAT scores! [The] algorithm evaluates people's past to predict their future. … Then the Insight helicarriers scratch people off the list – a few million at a time."

It turns out that SHIELD has been infiltrated by a group called Hydra, which was founded by Nazis during World War II. "Hydra was founded on the belief that humanity could not be trusted with its own freedom," explains a Hydra leader to Captain America in the classic movie-villain move of explaining everything to the hero because the hero is doomed (but then of course the hero ends up somehow narrowly escaping certain death).

"What we did not realize is that if you try to take that freedom, they resist. The war taught us much. Humanity needed to surrender its freedom willingly."

So Hydra started secretly sowing international chaos and violence until, as another Hydra baddie puts it, "The world is finally ready to give up their freedom for security."

As you might guess, Cap is not down with that, and he thwarts their sinister plans by going up against the corrupted SHIELD leadership. As he says in this comic book panel while holding an American flag, "I'm loyal to nothing… except the dream." 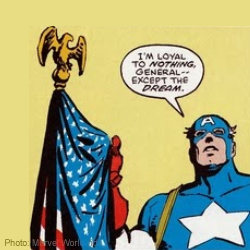 The movie's co-director, Joe Russo, told Mother Jones that he did set out to make a "political" film drawing on "civil liberties issues, drone strikes, the president's kill list, preemptive technology." The movie was already filming when Edward Snowden's leaks first came out, so the surveillance aspect was not an overt reference to his revelations.

"It was all leading up to Snowden," Russo said. "It was all in the ether, it was all part of the zeitgeist."

And mirroring real life, a secretive agency went too far pursuing security at the expense of liberty, undermining the very values that the government is meant to protect.