The Chain Must Break and Injustice Must Fade Away

Mohamed Ben Soud is a plaintiff in the ACLU’s lawsuit against the psychologists behind the CIA torture program. The following statement from him was recorded in Arabic and played during a recent ACLU event in Geneva on the sidelines of the 30th U.N. Human Rights Council session. The English translation below has been lightly edited for clarity.

I am Mohamed al Shoreiya Ben Soud, from Libya.

I would very much like to thank the organizers of this event and appreciate their invitation, which makes me very proud. I consider my participation a historic opportunity for me to tell you about my experience and suffering during those difficult days in my life, the year and a half during which I lived in CIA secret prisons — in a dark prison near Bagram in Afghanistan, where the CIA insisted on violating all international conventions of humanity, morality, and legality.

They tried very hard to suppress the violations and facts of these prisons in different ways. But in the words of Tunisian poet Aboul-Qacem Echebbi, “The chain must break and injustice must fade away.” These days, and through this and other events, we live this truth which they tried to suppress and hide.

On April 3, 2003, my home, where I lived with my family in Pakistan, was raided. I was kidnapped after I was shot and my foot broken. I was moved for two weeks between Pakistani jails in Peshawar and Islamabad. I immediately underwent interrogations by agents of the CIA. The interrogators kept threatening to move me to a special place where I would be subjected to interrogations and violent treatment.

I was indeed moved to a “black site” near Bagram, and I was deposited in a narrow, dark, and cold cell. Interrogations and torture started right away. I was forced to leave my cell naked and walk inside the jail once every half hour on average throughout the night, despite the fact that my foot was broken and I had not received any medical treatment. This was followed by continuous psychological and physical torture. I was left naked for several weeks. My hands and feet were shackled to the cell wall by metal shackles. I was kept sitting for very long and tiring periods.

All this continued for several months. I was deprived of sleep by being forced into a sitting position using shackles and by loud music that did not stop at any point during my detention. Guards also forced us to wake up once every hour and throughout the night. We were deprived of light for months. We were refused use of the bathroom, instead forced to use a bucket left in the room. They intentionally took the bucket cover. We were deprived of hygiene for five months, refused a shower or to cut our hair or nails. 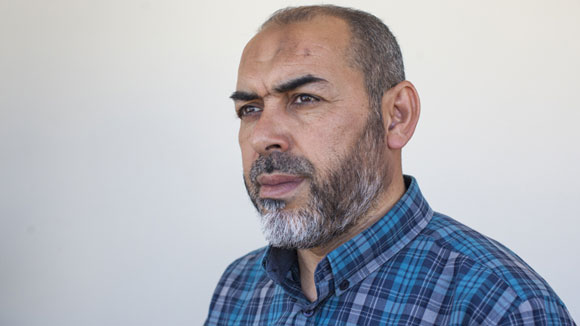 The teams of interrogators used violence that exceeded any kind of humanitarian and moral limits. This included slamming us against the walls, slapping in the face, punching in the stomach, pouring ice water on our naked bodies, creating the illusion of drowning several times, and stuffing us in small boxes. I was hung by my hands to the ceiling of the room for a day and a half. We were deprived of food as part of a methodical program where they sometimes prevented us from eating for 30 hours. The meals were of poor quality and very limited quantity, lacking any nutritional value. We were deprived of medicine and any medical care.

The so-called doctors in that place were not practicing medicine. Rather, they were playing a dirty role as part of the torture machine and investigation teams. Their function was to oversee torture practices and a starvation policy, in addition to supervising the shameful, degrading, and humiliating procedures during the transfer of detainees.

It was a difficult and stressful period, during which the CIA agents tried to find a real charge to use against me. When they failed, rumors started to surface that we would be transferred to the hands of the Qaddafi regime. I explained to them more than once that if I was to be transferred, my life would be endangered. I told them that the Qaddafi regime is an oppressive regime, which would subject us to the worst kinds of torture and oppression, and that we would not receive a fair trial there. However, I was transferred by a special flight, and in a humiliating and degrading manner, to the Libyan regime on August 23, 2004. The transfer was coordinated between the CIA and the Libyan intelligence apparatus, which was headed then by Musa Kusa.

I spent several years in Libyan jails, where I was subjected to different kinds of psychological and physical torture. After a year and a half, my case was referred to the court. The court’s procedures were illegal and unfair. The judge appointed a lawyer to represent me, but I was never allowed to meet or speak with him. The lawyer did not provide any defense and the court sentenced me to life in prison. The suffering extended to my family, who lived in difficult and harsh conditions. My family was deprived of all civil rights, and my daughter was deprived of education.

I hold the government of the United States fully responsible for the suffering and the terrible tragedy that I and my family endured over these eight years. I especially hold the CIA and its agents responsible for their methodical practice of psychological and physical torture. These practices are the result of an official political decision taken by the American administration.

Human Rights Watch has published a shocking report, where I spoke about the details of the suffering I went through in these dark sites. The U.S Senate Intelligence Committee also published a report that confirmed beyond any doubt what I described. The Senate report has pushed the United States government to face ethical and legal responsibility.

I take this opportunity, in front of your gathering, to call for the following:

First, reveal the full truth. If the American administration feels ashamed in front of its citizens and the free people of the world, it should endeavor to rectify this wrong, rather than dealing with it by seeking to hide the truth and evade it — a further wrong.

Second, expose all persons who were involved and hold them accountable.

Third, offer an official apology for the victims of these crimes.

Fourth, as I am one of the victims of this criminal conduct and shameful acts, I demand material and moral compensation for all the suffering and oppression endured by me and my family.

There are behaviors and ethics that should bind all humans in dealing with each other, be it people or governments, developed nations or developing nations. This behavior should be based on respect for the humanity of every person. I wish for all the efforts of the free people of the world, human rights activists, and governmental and non-governmental human rights institutions to culminate in an agreement to oblige a complete end to these violations, create real guarantees to prevent a repeat of all the violations, and raise awareness about these issues so the people can pressure their governments to halt such terrible acts.

I thank the organizers of this event, and I am grateful to them for inviting me to speak. I thank the audience. And I wish all the best.

CIA TORTURE: VIDEOS AND MORE ON THE VICTIMS’ STORIES